Blog - Latest News
You are here: Home1 / News2 / 25th Anniversary of Jos Wolff as President of the FSPL “Féderation ... 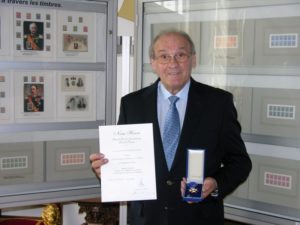 The 20th March 1993 in Dommeldange Jos Wolff was elected President of the Philatelic Federation of Luxembourg FSPL for the first time. Now we are very pleased to congratulate him on his 25thAnniversary as President of the Federation and 45 years member of the Bureau. Next Saturday 24th of March at the Congress of the FSPL he will be re-elected again.
Jos Wolff RDP and Honorary President of the International Federation of Philately (FIP), started his engagement within FIP in 1980 as Chairman of the Maximaphily Commission.
He has received many distinctions. Amongst them it is worth noting the FEPA Medal 2011 and of course the “Ordre de mérite civil et militaire d’Adolphe de Nassau” conferred to him by H.R.H. Grand-Duke Henri in the rank of “Officier”.

Congratulations Josy! We wish you many more years promoting philately in this wonderful way!

Contest for the Awarding of the 2018 “Giovanni Riggi di Numana Prize” for...