On 1st December 2020 the Union of Bulgarian Philatelists and the Bulgarian Postal Administration organised  a ‘solemn validation’ of a single-stamp block (miniature sheet) celebrating the 135th anniversary of the printing of the first Bulgarian banknotes in St Petersburg. The ceremony was held in the Royal Palace ‘Vrana’ with the number of guests kept small to  comply with pandemic restrictions. 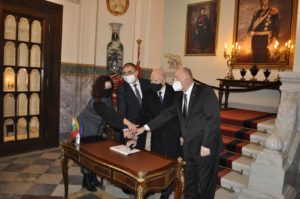 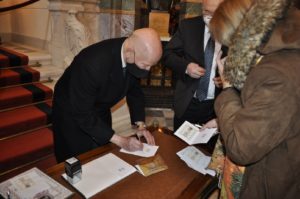 As a donation to the Vrana museum, Spas Panchev presented the original design, specially framed, to His Majesty who signed a limited number of special carnets with a version of the block for those present (left). 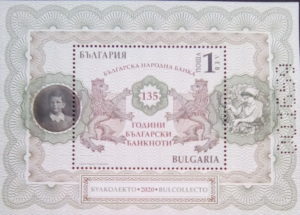 The design (right) draws on fragments of iconic Bulgarian banknotes – a lion (symbol of Bulgarian statehood), a portrait of His Majesty Tsar Simeon II taken from the BGN 200 banknote in use between 1943 and 1947, and a typical cameo from the BGN 2 banknote, in use from 1962. It also carries a caption referring to the BULKOLEKTO Collectors’ Fair organised by the Union of Bulgarian Philatelists and the Plovdiv International Fair which was unfortunately cancelled in 2020 due to the pandemic.