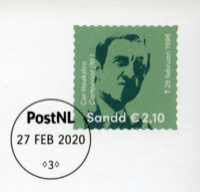 As could have been read on Fepanews a year ago the Netherlands has a new type of postal stationery as of January 2019.

It is a standard postcard size (A6) card with an imprinted stamp, meant to be for shipment of the Dutch monthly ‘Filatelie’ in which the Dutch federation and FEPA-member KNBF is publishing their official announcements.

This Magazinekaart was issued by the other Dutch postal operator Sandd. Dutch UPD postal operator PostNL has taken over Sandd  as per February 1st 2020 and merged the two companies together as PostNL. This means that Sandd is completely from the market.

The magazine cards were – as was for the year 2019 – produced as a set in December 2018 for the entire year. In 2019 the topic was coat of arms of places where the month after a philatelic event took place. Not only Dutch places, but also abroad. In total eleven different cards.

The theme for 2020 is leap year. Persons (international) born or died on February 29th.

The first two issues were still fully under Sandd operation, as the February issue was already delivered to the postal operator in January. The March issue was however fully PostNL business. There have been major discussions with PostNL who were not enthusiastic about the idea of having a Magazinekaart as address card for the magazine. It could also cause problems as the sorting centres and machines could not handle these cards with imprinted stamp. As the Magazinekaart was part of the original contract with Sandd, PostNL had to find a solution and now the cards for 2020 (with Sandd imprint) are used together with a PostNL postmark! This will be done for the entire year 2020.

Design mistakes happen from time to time with stamps and so it happened by the first Magazinekaart of 2020. Designer Annemarie Zijl had made a mistake which one of the keen readers of Filatelie found out. The first person on the card is Alessandro Farnese, Pope Paul III (1468-1549). Born on February 29, 1468. By mistake the wrong Alessandro Farnese (1545-1592) was pictured! He was Duke of Parma. 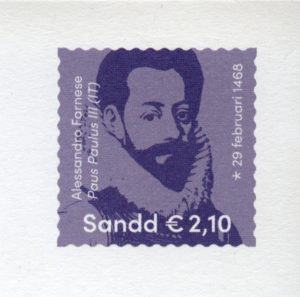 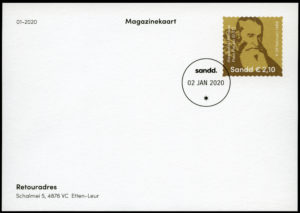 The wrong and right picture of the Alessandro Farnese.

A new Magazinekaart was produced with the right picture.