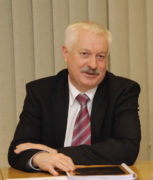 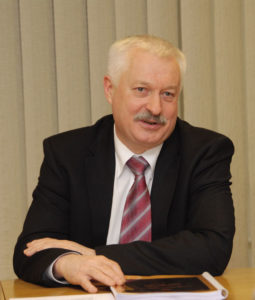 Eugenijus Uspuras , President of the Union der Philatelisten Litauens has died at the age of 64.  Born on July 24, 1955, in Irkutsk, Russia, he was professor and member of the Lithuanian Academy of Sciences. He carried out a successful scientific career being Director of the Lithuanian Energy Institute and since 2014 Manager of the Division of Nuclear research.

Passionate for philately he had a Gold Medal exhibit “Railway Post in Lithuania 1861 – 1949”. In collaboration with Jan Kaptein he wrote an important book on the same subject.

Most of his scientific career was in heat transfer and fluid flow in nuclear reactors of different applications, deterministic and probabilistic safety analysis of the nuclear reactors, development of fission and fusion energy technologies, transport of the radioactive materials, energy security and technology risk analysis.

Graduated from the Vilnius University in 1977 and started professional activities at Lithuanian energy institute. In 1986 defend Ph. Dr. theses in the field of Thermal Physics in the same institute, in 1998 received degree of Doctor Habilitus in Energy and Thermal Engineering Sciences, in 2001 was conferred the title of professor and was elected a member-expert of the Academy of Sciences of Lithuania. In 2006 he was elected a corresponding member of the Academy of Sciences of Lithuania and a Foreign Member of the Russian Academy of Natural Sciences.

On top of the mentioned philatelic book “Railway Post in Lithuania 1861 – 1949”, he was an author of about 300 scientific publications including 3 monographs and 3 handbooks.

Our sincere condolences to his family and also to the Lithuanians philatelists.

FEPA Exhibition EXFILNA 2019 in Santander: For the first time in history, postmarking...