THE 12th EUROSCOUT IS HELD AT EVORA (PORTUGAL)

Évora, the beautiful Portuguese city of the Alentejo and World Heritage City, has hosted the 12thEuroScout from May 4 to May 6. At the same time, it also hosted the 37th World Scout & Guide Collectors Meeting.

The event was supported by the International Federation of Scouts & Guides Stamps Collecting Organisations (IFSCO), the Évora City Council, the Correios de Portugal and the Portuguese Philatelic Federation, and organized by the Clube Portugues de Coleccionadores de Objectos Escutistas, and the Confraria Timbrologica Meridional. 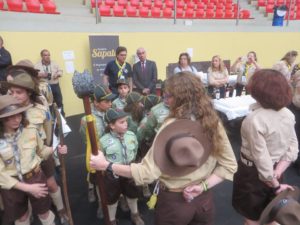 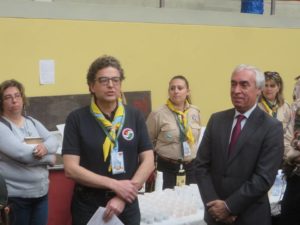 Opening Ceremony, attended by the Mayor of Evora and many youth Scouts

It has developed in the Évora Arena, the former bullring, now prepared for all kind of acts.
The inauguration ceremony was presided by the Évora Mayor, Mr. Carlos Manuel Pinto de Sá.

The organizing committee has given a lot of importance to the activities with Évora’s Boy Scouts. Not only they have been present in the inauguration ceremony, but they also have visited the exhibition and on Saturday they played a game around the city, which finished in the Arena. Also, they were the organizers of the official dinner. 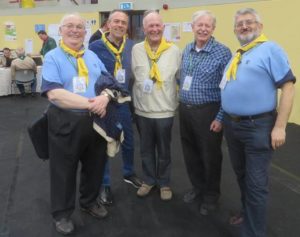 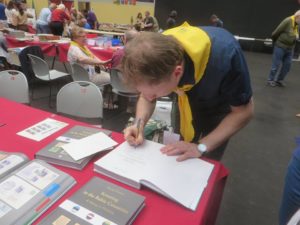 Thirty collectors of eleven European countries have participated with their exhibits. Collectors of the United Kingdom, Netherlands and the United States were represented as well. This exhibition is celebrated every two years, in different European countries, and because it is a non-competitive exhibition, it gives a lot of freedom to the collectors and the variety of matters and topics is very wide. 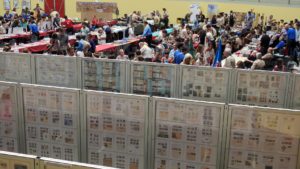 General view of the Exhibition

We were able to admire very interesting collections, such as: “Air Scouts and Scout Air Mail”, by Maurizio Cavalli (I); “The Cub Scouts” by Leif Niesen (DK); “The scouts like postmen” by Gottfried Steinmann (D); “Scout Maximaphily”, by Hallvard Slettebo (N); “Back to Gilwell”, by Steinar Halvorsen (S); “Once in Brownsea”, by Victor Manuel Peres Gonzalves (P), “Scouting”, by Luis Martinez de Salinas (E) or “National Swiss Camps and events”, by Martin Bosle (CH).

Darius Liutikas (LT) has presented his new book, “Scouting in the Baltic countries. A History in Philately”, about the Baltic Scout philately at home and in the exile. The book, with more than 1.ooo illustrations, is for readers of all ages, from the actual Scouts to the expert philatelist. 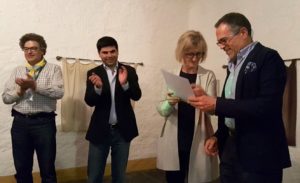 The Walter Grob Award, won by Benito González Bugallo, on the right side of the photo

The Walter Grob Award, in memory of this great Swiss collector, pioneer of the Scout Philately, is donated by his family. It promotes the new one-frame exhibits, never before presented. The most important criteria is the treatment, not the rarity or the value of the items. Also, it is focused to the open class exhibits. In this edition, six collectors have presented their works. And the winner has been Benito Gonzalez Bugallo (E) with his exhibit about the founder of Czechoslovakian Scouting “Josef Rössler Orövsky (drugs, sports and scouting)”. 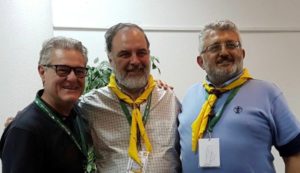 The new Board of the IFSCO. From left to right, Vice-President: Alessandro Pierotti, President: Estanislao Pan de Alfaro and Secretary: Julian Rodriguez Fernandez

The International Federation of Scouts & Guides Stamps Collecting Organisations (IFSCO) has had his Conference, with the assistance of ten clubs and one proxy. Also three observers were present, from Lithuania, Mexico and Chile. The Conference has received the news of the merge of the two oldest Austrian clubs. Also, the Conference has taken three important decisions:

The admission of Lithuania

The election of Italy for the next 13th EuroScout in 2020, at Commachio.

Finally, we have had some beautiful days with a lot of friendly philatelic activity, foreign friends, and kind Portuguese hospitality.

Our greetings to the Organization members by their great success.