Blog - Latest News
You are here: Home1 / News2 / FEPA’s Board holds virtual meeting with its Members 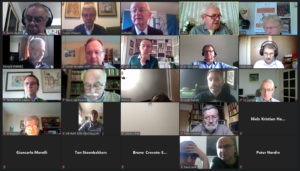 On 21st November 2020 the FEPA Board held a Zoom meeting with its Members, the national Federations, Associations and Unions. The meeting was joined by representatives from 31 Members and by the members of the Board. The FIP President, Bernie Beston, also joined the meeting by invitation.

The meeting was called because it has proved impossible to organise the annual FEPA Congress meeting this year due to COVID restrictions. However, the FEPA President, Bill Hedley, emphasised at the outset that it was not a Congress meeting, but rather an opportunity to bring the Members up to date with developments during 2020 and to discuss current questions with them. These included the current review of the FEPA Statutes and the  shift into on-line communication and exhibiting that has been such a major development forced on philately by circumstances during 2020. Many useful contributions were made during the discussion, especially on the subject of virtual exhibiting, that will help the Board to carry forward its studies on these topics.

The Board also took the opportunity to invite contributions from Members for the next FEPA NEWS, due to be published at the end of January 2021, and to outline the timetable for nomination of candidates for the next round of FEPA Awards. The date and place of the next FEPA Congress were also confirmed – it will be held in Athens on 23 November 2021 (the day after NOTOS ends).

Finally, the President informed the meeting that Ari Muhonen had decided to step down from the Board at the end of the year. He thanked Ari for his magnificent contribution to FEPA  as Webmaster and Board Member over the last few yearend said that we looked forward to continuing to work with him as Finland’s representative at the FEPA Congress.

In conclusion Bernie Beston brought good wishes from the FIP and everyone wished each other a Happy Christmas and New Year. It was also universally agreed that everyone fervently looked forward to meeting each other again in person.

The record of the meeting will be published in the next FEPA NEWS issue.

NOTOS 2021 – Bulletin 2 has been published
Scroll to top