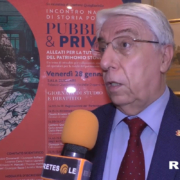 On 28 January 2022, at the Sala Zuccari of Palazzo Giustiniani (residence of the President of the Senate), Rome, an important conference took place among governmental officials and postal historians. It was titled “Public and private allies for the protection of the heritage of postal history”. All the major Italian philatelic associations were present: FSFI, ISPP “Aldo Cecchi”, ANPF as patrons, and AISP, AICAM, ANCAI, ASPoT, CIFO, Gruppo di Modena, Il Postalista, Post Horn, USFI as Supporters. The conference was coordinated by the postal historian Claudio Ernesto Manzati.

For a long time now the Italian public authorities have applied pressure to postal historians, collectors and traders regarding postal history documents. The point is they consider them part of the nation’s legacy and as such they belong in the State’s archives. In fact, the authorities have sometimes taken action to confiscate them.

On the other hand, collectors made clear during the conference that it is they who actually protect and promote the national heritage of postal history by collecting the material, studying and spreading it all over the world by their writings, exhibits etc. Among the speakers, Senator Carlo Giovanardi (FEPA Medal for Exceptional Support to Organized Philately 2019) took the floor in support of the philatelists’ arguments.

The Proceedings of the conference are now in print and will be available at the Federation’s stand at the upcoming Veronafil conference on 20-22 May. 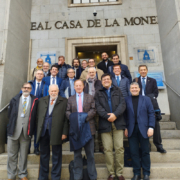 The Royal Spanish Academy of Philately and Postal History