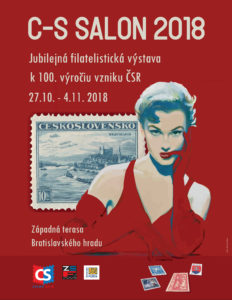 An inspirational philatelic exhibition on the 100th Anniversary of the formation of Czechoslovakia with the focus on the historical development of Slovakia as a country and Slovaks as a nation. 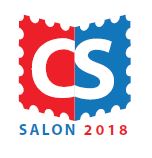 The Jubilee Philatelic Exhibition C-S SALON 2018 in Bratislava was a success not only because of the exhibition location at the one of the most attractive places in Bratislava – the Bratislava Castle attracting hundreds of visitors every day. In fact, how many exhibition premises could be found depicted on a postage stamp? 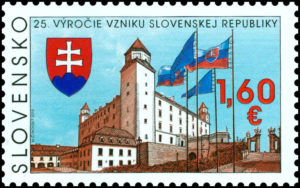 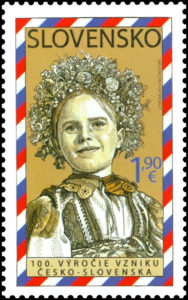 The main innovation, others might follow in future philatelic exhibitions, was that original concept, not everybody had trusted since the beginning. However, it has showed as a brilliant idea attracting many visitors and hopefully future stamp collectors.

Indeed, the organisational team under the strong commandment of Miroslav Bachratý (and with the great support of the Slovak post / POFIS) was able to compile an incomparable pile of great exhibits and eye-catching philatelic gems. They covered the overall historical journey of Slovakia and Slovaks from pre-stamp times until the most recent days with all the key milestones that long and not always easy development of the state and nation have brought. To cover all cornerstones and important aspects, the organisers invited the best Slovak as well as Czech philatelists to show not always whole but the most attractive excerpts of their competitive exhibits as well as their hidden philatelic collections never shown before. All connected by the red thread line on Slovakia and Slovaks and their historical struggle and self-determination presented by genuine pre-stamp covers, postage stamps, postal markings, postal stationeries, field post entires, postcards and other often unique postal documents. 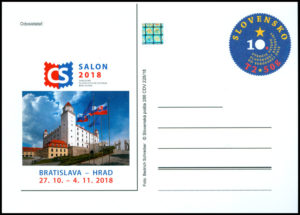 The first one was devoted to the use of the Austrian stamps (Austrian Postal Administration in Slovakia 1850 – 1867 by P. Severin) as well as postal routes (Postal Routes in years 1850 – 1866 on the territory of nowadays Slovakia by J. Máj) on nowadays Slovak territory, and regional postal history research (Postal Service in Spiš region until 1920 by F. Divok).

Naturally, a particular importance attracted the first Czechoslovak stamps Hradčany issued on 18. 12. 1918 and their author Alfons Mucha. They showed in several study exhibits on the stamps itself (Alfons Mucha – Hradčany by J. Škaloud, Hradčany – an Excerpt form the Specialised Collection by J. Džubák, Weipert Falzum by Z. Filípek) as well as its postal use on the Slovak Territory (Hradčany – The use in Slovakia by J. Škaloud, Hradčany – Postmarks from the Territory of Slovakia by J. Džubák, Perfined Hradčany by J. Píša). This inter-war period was complemented by an outstanding FIP Gold medal awarded exhibit on the gems of Czechoslovak philately (Czechoslovakia 1918 – 1939 by P. Lazar), study exhibits on Czechoslovak stamps and stationeries (Stamps 4 and 5 Kč Tatry 1927 and 10 Kč Bratislava 1936 by R. Květon, 80 Years of the Issue of the Exhibition Souvenir Sheet “National Exhibition of Postage Stamps Bratislava 1937 by R. Šulej, Postal Cards “Know Your Country”, 1937 by J. Jaššo) and several postal history exhibits (Czechoslovak Air Mail Related to Slovakia by B. Helm, Penal Porto by V. Malovík, Komárom – Komárno: Postal History of a Divided Town by P. Csicsay). 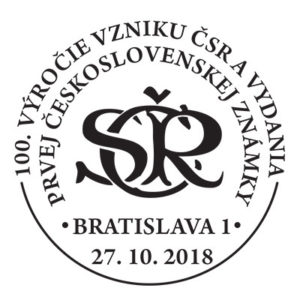 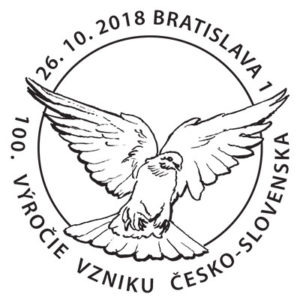 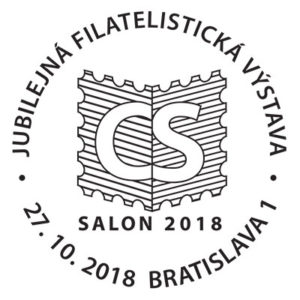 A special part was devoted to those unhappy period of WWII when two states were created on the previous Czechoslovak territory (Postal Service in Protectorate Bohemia and Moravia by M. Příkazský, German Field Post in Slovakia During the Attack on Poland in 1939 by P. Gebauer, State Coat-Of-The-Arms and Portraits with SLOVENSKÝ ŠTÁT/1939 Overprint by R. Rakovský, Souvenir Sheet “For Children” by M. Jurkovič, Holocaust in Slovakia 1939 – 1945 by O. Földes, Czechoslovakia in the Context of the 2nd World War 1939 – 1945 by J. Korený).

From the thematic point of view, one could find an excellent topical exhibit on M. R. Štefánik (Milan Rastislav Štefánik – a scientist, soldier, diplomat by J. Maniaček) as well as several frames on Czechoslovak and Slovak stamp art (Jozef Baláž – …The closest to my Heart” by the Slovak Postal Musem), most beautiful Czechoslovak and Slovak stamps (Appreciation of Czechoslovak Postage Stamps 1945 – 1992 by J. Frátrič, Perforated Treasures by the Postal Museum, International Successes of the Slovak Stamp Production and Slovak Gold for Postage Stamps by K. Milan), and joint issues of Slovakia (Joint Issues of Slovak Stamps by P. Hložka) 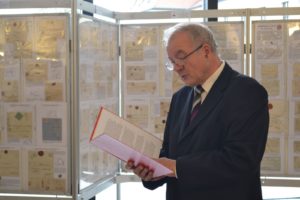 The main initiator of the C-S SALON 2018 exhibition and the head of the organisational team Miroslav Bachraty during the official exhibition opening speech.

Of course, we cannot mention all presented exhibits. However, those who want to get an overview might take in their hands a high quality full colour exhibition catalogue. It provides with six topical as well as study articles on several related topics as the Bratislava Castle, a fight for Slovakia in 1918 – 1920, Hradčany reminiscences, the Slovak country motifs on Czechoslovak stamps, the restoration of postal service after WWII, the Czechoslovak monetary reform 1953, Jozef Baláž as an author of the Czechoslovak and Slovak stamps, and the history of the Union of Slovak Philatelists. In addition, as a handful guide, short introductions of each particular exhibit complemented by a philatelic showpiece from that exhibit, and, of course, the list of all philatelic gems presented in the Treasury of Slovak philately section. Such an exhibition catalogue concept addresses both advance philatelists as well as wide public showing important philatelic and postal history artefacts. The catalogue will become not only a reminder of the great exhibition but also a good source of information for future generations and will bring an inspiration to new collectors and exhibitors. 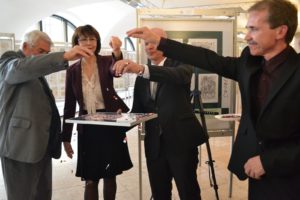 Traditional “christening” of the newly issued postage stamp “100th Anniversary of the Formation of Czecho-Slovakia” by the representatives of the Slovak post and POFIS as well the author of the stamp design Igor Piacka (right) during the official exhibition opening.

The exhibition complemented several public and philatelic events starting with the official exhibition opening – a bit rhetorical, a bit musical, and bit awarding, but still attractive for all invited officials, guests and participants. However, the most important part was the festive introduction (we call “christening”) of the new Slovak stamp “100th Anniversary of the Formation of Czecho-Slovakia” with the stamp design author, a recognised Slovak artist, Igor Piačka autographing. 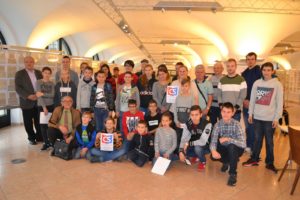 Young philatelic generation with their club leaders – hopefully success followers of nowadays exhibitors – could not miss the opportunity to attend the exhibition. Some of the youngsters are authors of presented exhibits.

Among the other activities, we can mention the most attention attracting ones as a public pool on the philatelic history and children contests for Slovak stamps. Highly evaluated by visitors was a permanent presentation of philatelic experts providing guided tours for visitors.

We consider, and many positive reactions we received confirm as well, that the Jubilee Philatelic Exhibition C-S SALON 2018 in Bratislava was something extraordinary as is extraordinary the 100th anniversary of the first Czech-Slovak Stamp celebrating the formation of the Czechoslovak Republic in 1918.