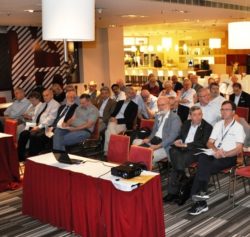 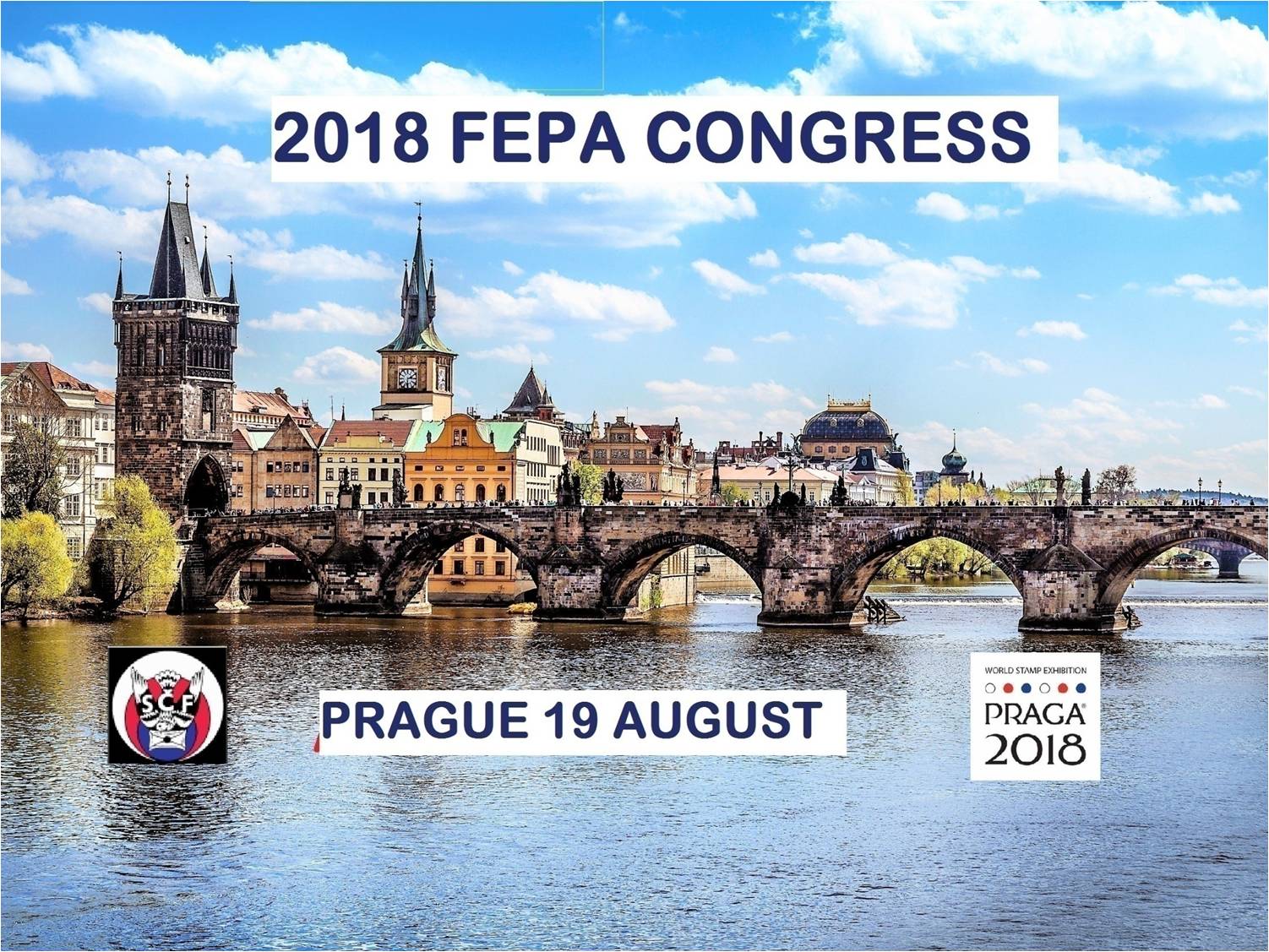 Presentation of the new FEPA Gold Pin to the Presidents of the FEPA  members present at the Congress. 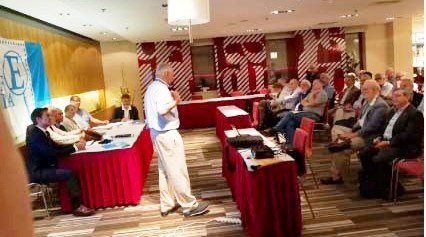 FEPA President José Ramón Moreno welcomed all participants, especially those attending the FEPA Congress for the first time, and thanked the Czech Philatelic Federation and the Organizing Committee of PRAGA2018 for their generous invitation to hold it in Prague.

Mr. Vit Vanicek, President of PRAGA 2018 and Vice-president of Czech Philatelic Federation, welcomed the attendants and wished them a successful work and a pleasant stay in Prague and in Czech Republic.

The Secretary Bojan Bračič made the roll call as follows:

Present were 38 out of the 44 FEPA Member Federations, representing an 86 % attendance. So, all decisions of the Congress were valid. Also attended the Congress 14 Observers appointed by their respective FEPA National Federations, Associations or Unions. 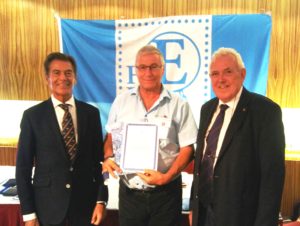 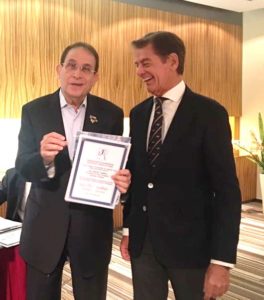 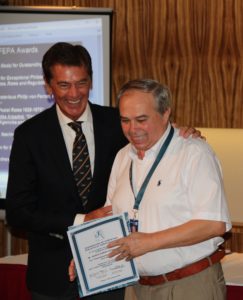 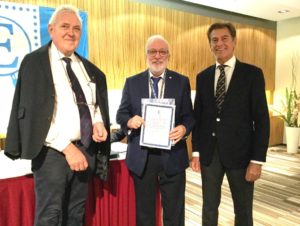 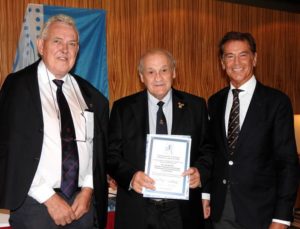 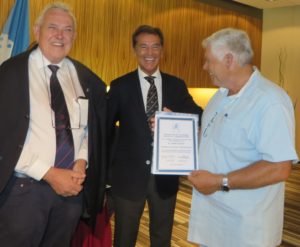 Presidents not present at the Congress will receive the FEPA Gold Pin when attending a future FEPA event.

Messrs. Ivan Librić and György Lövei were appointed as tellers.

The Minutes of the 2017 FEPA Congress were sent to all FEPA members by e-mail in due time. No member made any comment and the minutes were accepted unanimously.

All reports were sent by e-mail in due time. They were approved with no questions or remarks.

The Treasurer Alfred Kunz explained some of the most important items of income and expense of the financial report that had been previously circulated to all members. The most relevant ones, printing and shipping costs of the FEPA News magazine,were covered with advertisements in the magazine. The improvement of the FEPA financial situation was also due to the increasing number of members requesting the FEPA Patronage or Recognition and to the concurrent keen control of the expenses.

The FEPA President expressed his gratitude to Mr. Kunz for such effective work. There were no questions and the report was accepted unanimously.

The Auditor Mr Gerhard Kraner checked the whole Treasurer’s operations and found everything in good order. He congratulated the Treasurer for his good work.

Mr Moreno, in his capacity of Editor of the FEPA News magazine, explained why last number had more pages of advertisements as usually. As most FEPA events of 2018 happen in the second part of the year, there was less information material to fill the 84 pages of the issue and so more ads were accepted.He requested all members to send contributions about philatelic events in their area, which is important for magazine and for the Website “life”. Mr. Vaz Pereira congratulated the Board for the magazine and proposed that every FEPA member could have its own section on FEPA News to present the story of its national Post. 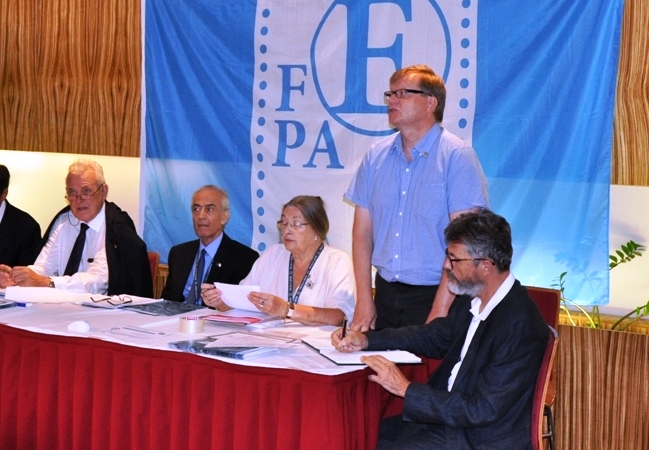 FEPA webmaster Ari Muhonen explained the whole situation about the six weeks “silence” of the FEPA website that was transferred to a new host in Finland. Now everything has been solved and is in the hands of FEPA, so no further technical problems are expected.

Birthe King explained that after some practice, jurors for Open Philately suggested changes to the FIP Guidelines for Open Philately. Treatment will not be divided to philatelic and non-philatelic part any longer but it will be united as one only criterion of Treatment. The change will be published in the FEPA News and in The FIP Flash.

Mr. Rafael Acuña in the name of the Spanish Federation presented the motion, aimed at addressing a major issue for the exhibitors in this class. The current FIP Guidelines specify that items shown should have been issued in the last 20 years approximately. However,the IREX of every Exhibition has a different validity date of issue for the material to be exhibited in this Class. Hence, the Spanish motion aims at harmonizing the dates in all the exhibitions.

FEPA President Mr. José Ramón Moreno agreed that to study this as a new Class could be very positive. It should be considered that one of the main objectives of the Modern Philately Class is to demonstrate to Postal Administrations that we, the philatelic institutions, encourage buying and collecting the new issues. Mr. Vaz Pereira will prepare a document that will be sent to the FEPA Board and to Mr. Bernard Jiménez, FIP Vice-President representing FEPA about this new “after 1950” Class.

The final proposal of the motion, after a positive suggestion of Jon Aitchison, was that material for Modern Philately Class should be from 2000 to 2020 period. After five years the period will be changed from 2005 to 2025 and so on in the future. Anyway as it is already at the present Guidelines “Modern Philately exhibits emphasize material issued in the last 20 years or so. However, this is not meant to be a rigid time rule and if the majority of the material falls inside the 20 year period, it can be shown as a Modern Philately exhibit“.

The motion of the Spanish Federation was approved with 36 votes in favour, 1 against and 1 abstention.

Mr. José Ramón Moreno explained that the FIP is about to adopt the FEPA Regulations at the next Congress in Thailand 2018  as an experimental class.

Mrs Birthe King remembered that the Regulations for the Evaluation of Picture Postcard Exhibits at FEPA Exhibitions were approved by the FEPA Congress in Athens, on 15 November 2015, subject to review by the 2018 FEPA Congress. The experience in this two and a half years has proven that the period was too short to get enough indications for modifying the regulations. So, it was proposed and agreed to postpone the review for the next two years and await further progress from the FIP.

The new Guidelines to the FEPA Regulations will be used at ITALIA 2018 Philatelic Literature International Exhibition with FEPA Patronage, and then final proposal will be presented to the next Congress.

Mr Chris King, candidate for next FIP President,presented his view of future tasks of the FIP and his goals in the FIP if he will be elected, including his seven promises for 2019 in a document that would be distributed to all Federations.

Mr Niels Kristian Hansen, President of the Danish Federation declared that the Nordic Federations will support Mr King and asked to vote for him.

Mr Pedro Vaz Pereira mentioned that Mr King is the right person for the needed changes in the FIP but that the better for Philately would be to create a new International Philatelic Institution independent from the FIP. 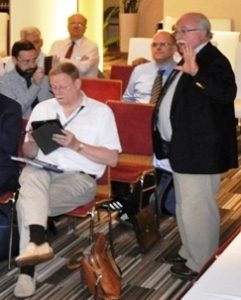 -The Great War. Verona, Italy. FEPA Recognition. Mr Crevato-Selvaggi called for participation to this exhibition which will be held from November 23rd to 25th 2018 in Verona. Exhibitors can have as many frames (12 A4 pages) as they request.

Details of all these FEPA exhibitions can be found at www.fepanews.com

During the Congress the FEPA Recognition was requested for the following exhibitions:

-ECTP 2019 in Verona, Italy, after agreement of the German and the Italian Federations. November 22nd to 24th. Requested by Mr. Crevato-Selvaggi.

All requests were unanimously approved and the FEPA Recognition was granted to this new five FEPA Exhibitions.

Mr. José Ramón Moreno pointed out that FEPA has constantly made all efforts to stimulate as much friendly as possible relationships among all FEPA members. In particular all invitations to foreign jurors or collectors should go through the relevant national federation and with its agreement, not directly to the individuals. This is strongly recommended also at regional or national level.

Mr. Ivan Van Damme, President of the Belgian Federation, explained the problem they had with a person from their country who is not even national accredited juror, but he served as a juror in other countries without any knowledge of the Belgian Philatelic Federation.

At the Congress were presented the following FEPA Awards of the year:

N.B. Will be published a separate post in the Website www.fepanews.com  and an article in the Magazine »FEPA News« about the Awards with all the information and photos of the presentations including those not handed out at the Congress.

The “Club de Monte-Carlo”, Monaco’s Federation, invited FEPA to host the next Congress during the MonacoPhil International Exhibition in December 2019. The invitation was unanimously accepted and so the FEPA Congress 2019 was granted to Monaco. 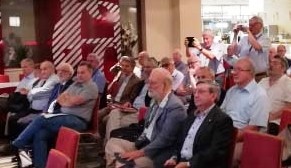 Mr Niels Kristian Hansen, President of the Danish Federation, requested all attendants to closely examine the philately in Scandinavia and can take advantage of their good practises to transmit to others.

Mr Crevato-Selvaggi explained that the Italian Federation prepared different documentation in e- form. And informed that it will be freely available to other federations.

The FEPA President informed the Congress about the request of the “Lebanese Association of Philately” to be member of FEPA, an association French speaking and which fell close to the French culture. According to the FEPA Statutes countries out of the European Continent or Nord of Africa could not be members of FEPA except if there is a special agreement with the FIP (Eg. Israel). So Mr. Moreno had a meeting in Prague with Bernard Jimenez, FIP Vice-President representing FEPA, and Mr. Prakob Chirakiti, FIP Director representing FIAP and President of FIAP. He informed that Mr. Jiménez was most cooperative and Mr. Chirakiti was very kind despite the unusual circumstances. There is already an association of the Lebanon member of FIAP. No federation or association from Lebanon is a member of the FIP. Some Delegates at the FEPA Congress said that we should not enter into internal matters of a country.

Mr Vit Vaniček thanked for FEPA Recognition to the exhibition Praga 2018 and for the decision of having the FEPA Congress in Prague. He also thanked to Mr Bernard Jimenez, FIP Consultant, for his help in organizing the exhibition and for his important contribution to the success of Praga 2018.

Finally, the FEPA President, Mr. José Ramón Moreno, emphasized that the main mission of all the members of the FEPA Board is to serve all FEPA Federations, Associations or Unions. And to do it in a proactive way. He also encouraged everybody not to hesitate to contact the Board when having questions, needing explanations or requesting help.This is FEPA Board’s task and we do it with pleasure.

The ECTP 2019 in Verona received the FEPA Recognition

It is still time to participate in ITALIA 2018, the most important Exhibition...
Scroll to top