Blog - Latest News
You are here: Home1 / News2 / New AEP publication on ‘Germany and its colonies’. 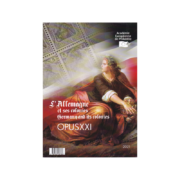 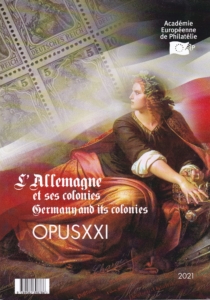 Rainer von Scharpen of the AIJP has drawn our attention to the latest Yearbook, OPUS XXI, published by the European Academy of Philately (AEP). As it was due to be presented at IBRA 2021 in Essen, the theme chosen  was ‘L’Allemagne et ses Colonies / Germany and its colonies’. Due to Corona, the event had to be postponed; the topic remained.

18 authors – among them not a single German – submitted papers that deal with postal routes from Bavaria to Italy, or Tuscany to the old German states, highlight the particular effectiveness of German postal offices in Morocco, trace the influence of the German Colonial Society in Rwanda-Urundi and explain the difficult border demarcation of German East Africa at Lake Kivu. In addition to postal-historical peculiarities of the colony of Cameroon, pioneers of German East Africa are presented. Two articles are devoted to aspects of the Franco-Prussian War of 1870/71. Portuguese prisoners of war in World War I come into focus, fiscal stamps of Alsace-Lorraine 1915-21 as well as the postal history of the Saar are examined. One article deals with the German Deep Sea Expedition of 1898-1899, another with space mail from and to German astronauts. Two articles on transatlantic mail between 1840 and 1885 round off the volume.

Thanks are due to the responsible editor, Dr Guy Coutant, who has ensured that this Yearbook lives up to the high standards set by the AEP over many years.