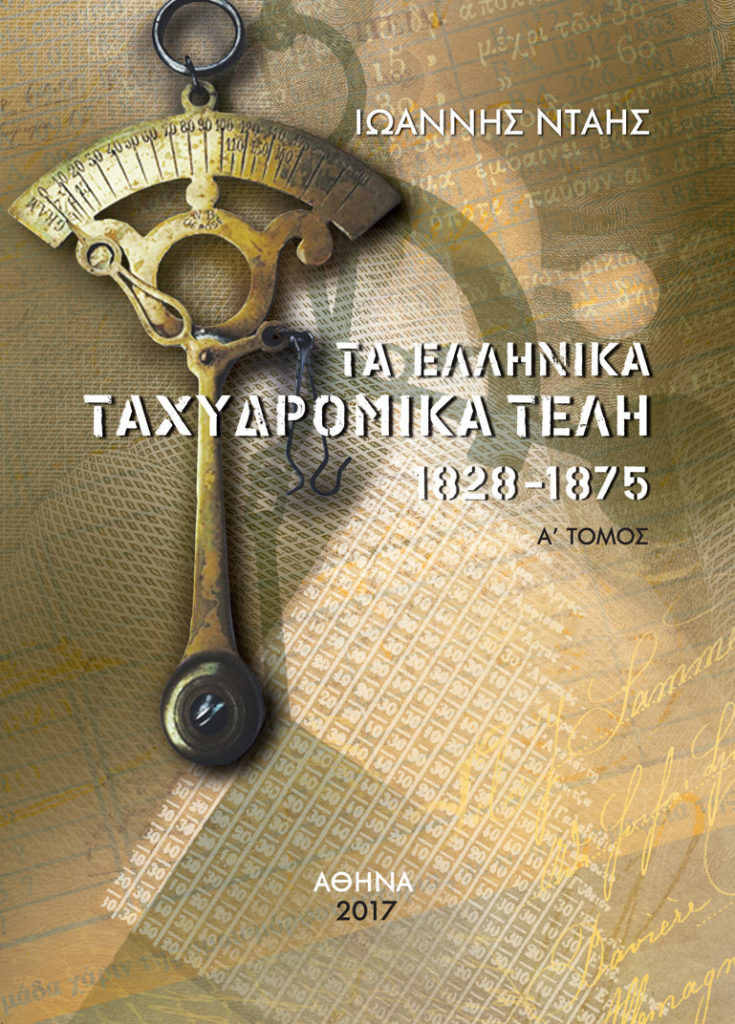 At the beginning of the year and following six years of painstaking study and exhaustive research, the most prolific and tireless of researchers, John Daes, presented us with a ground-breaking addition to international literature; a piece of work which, in my opinion, will be very difficult to surpass, by international standards and, even more so, by Greek standards. Worthy of note is  the beautiful cover designed by Mrs Myrsini Vardopoulou (Hon. AEP), which adds an exceptionally warm and artistic note, worthy of the content.

The author so far has written 7.000 pages on Hellenic postal history subjects in 14 books and has been awarded 6 times with the Hellenic Philatelic Federation’s annual literary award “C. Binos” till 2014.

The study of Hellenic postal rates poses insurmountable obstacles to every researcher, allowing them but a disjointed, rather than a comprehensive, understanding. This subject, in itself a challenging one to research, is rendered even more problematic by a lack of relevant analytical studies and, mainly, of primary sources, many of which still remain unknown. Unlike other countries where the existence of organised archives makes similar ventures an easier task, in Greece their absence poses the greatest impediment.

The work of J.D is by its very nature divided, as is to be expected, into two periods. The first concerns the evolution of the postal rates from the foundation of the Hellenic Post by Capodistrias in 1828 until the introduction of the postage stamp in 1861 (Volume A), whilst the second deals with the period up until Greece’s entry into the Universal Postal Union (Volume B).

2nd period: 1.1.1837-1.10.1861 – The rates are determined by the weight of the letter and the distance between the post offices of the letter’s dispatch and receipt. During this period the rates were modified nine times.

3rd period: 1.10.1861-1.7.1875 – The rates are determined solely by the weight of the letter. During this period Greece’s domestic and international rates remained stable for the sender. Only the international mail rates to and from abroad were altered, since they were influenced by other factors (e.g. cost of sea transportation, alternative routes, transit rates or the change of postal rates of the country of destination).

The author’s choice of method for negotiating the themes is the same one used in his previous works, and one which I feel has not received its due attention for its originality. After presenting the relevant legal contracts with other states or shipping companies regarding the transportation of mail, and the related Circulars of the Hellenic Post, he goes on to give examples of letters along with their accompanying descriptions as per the auctioneers or exhibitors, if they were taken from relevant exhibits. The author cites these descriptions as evidence to his sources, even though these descriptions are often incorrect or partially correct. Then he follows with the correct, according to the author, description of the letter and he sets out in detail the postal rates employed, with explanations of the manuscript notations or postal markings of the different rates, whilst at the same time presenting the relevant legislation in force. What is important in this endeavour is that the author does not restrict himself to merely presenting a letter as a sample, but instead tries to exhaust the subject by offering the reader letters of different weights or which arrived at their destination via an alternative routing, with all necessary explanations.

A further aspect is that in analysing the postal rates of a letter, the author does not refer the reader to the basic legislation but repeats, for each case, its key features. In doing so, he avoids forcing the reader to have to return to other pages for the relevant information. Instead, the readers have before them all they need to understand the postal rates of the specific example, which, as mentioned, are explained in detail, whilst at the same time referring the reader to the basic development of the relevant legislation. This didactic method allows the author to converse with the reader as equal to equal and not ex cathedra. This also gives the opportunity to the author to develop original thoughts that clarify specific cases where the bibliography has failed to cast light. What better relationship between author and reader, than when the former may take the latter’s hand and safely guide him through the difficult paths leading to the understanding of the given example? Even more so when the author confesses with all honesty that, in some instances, he does not know how to interpret a particular case.

The fields of research are revealed fully and in detail through each volume’s list of contents. That the list of contents are also translated into English, mitigates to a certain extent the disadvantage that this important work is written in Greek. However, the foreign reader who is familiar with the Hellenic philately of the period in question and is, therefore ,somewhat familiar with the Greek language, will have no difficulty in understanding the author’s thoughts.

As I previously mentioned, the work of J. D is a pioneering work also in terms of international literature. The foreign studies dealing with the development of national postal rates are on the whole limited to the presentation of the detailed postal legislation. They do not delve into the comprehensive presentation of examples; nor do they deal with the didactic aspect, which is of such importance.

It would not be an exaggeration to maintain that John Daes’ entire work to date, and especially the present magnum opus, should be considered a national work for which we owe him a debt of gratitude.