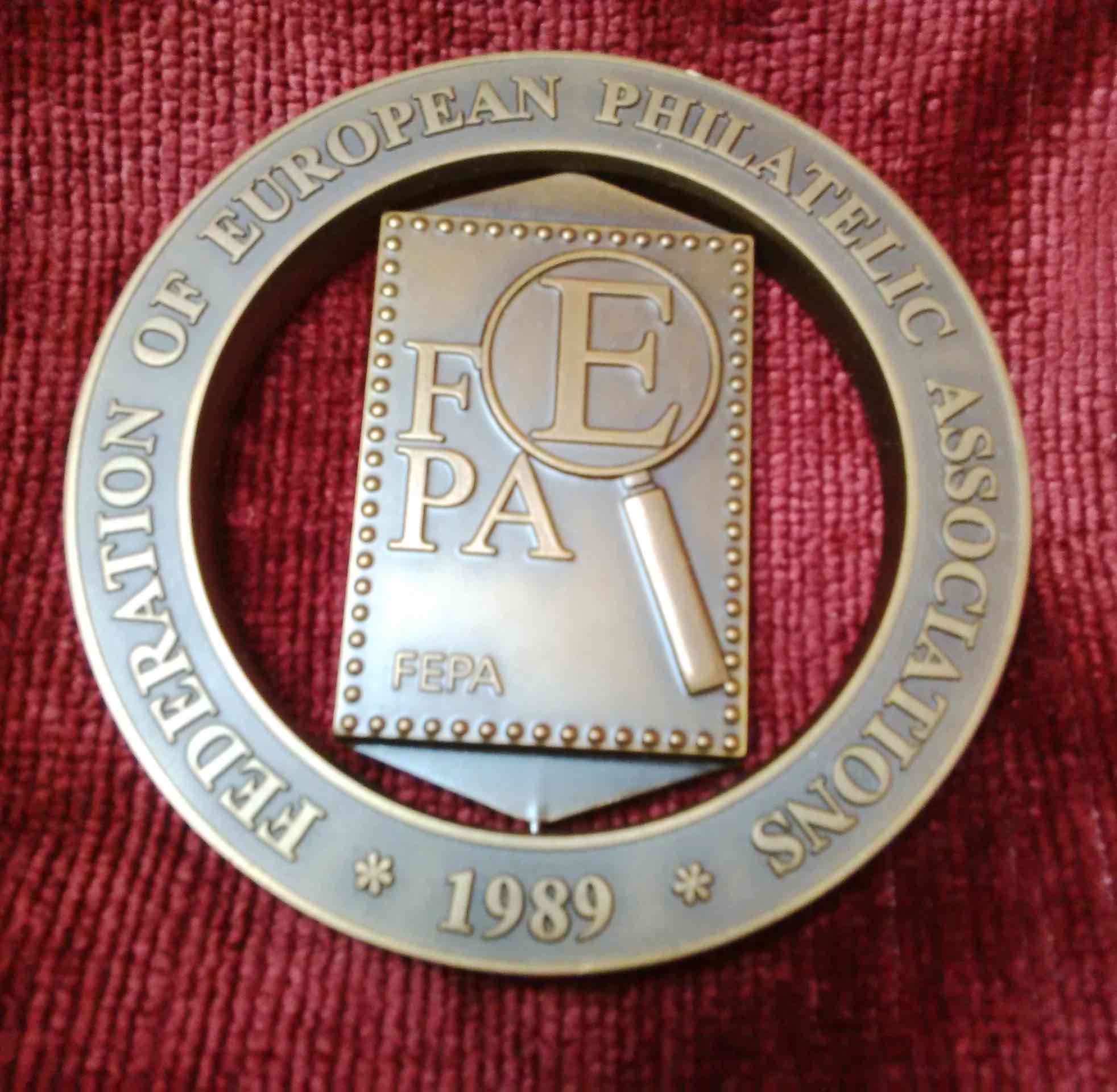 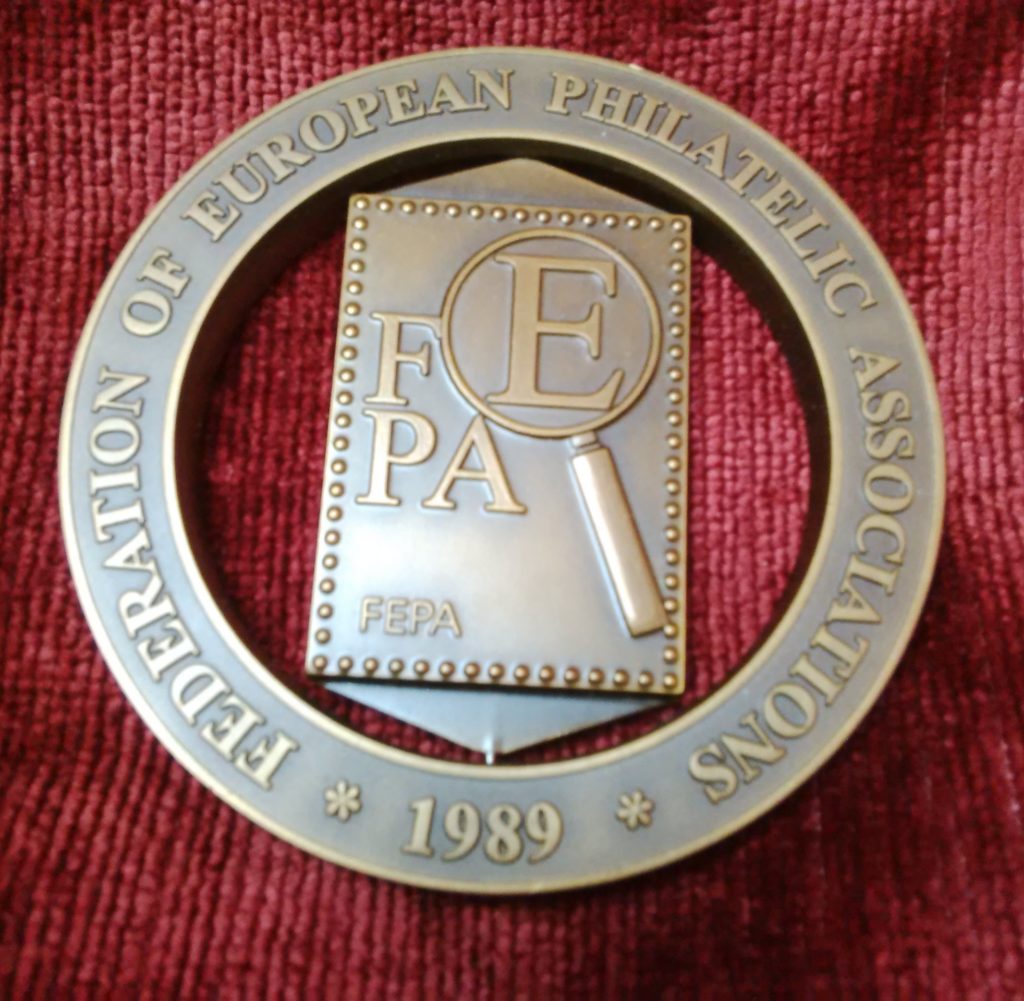 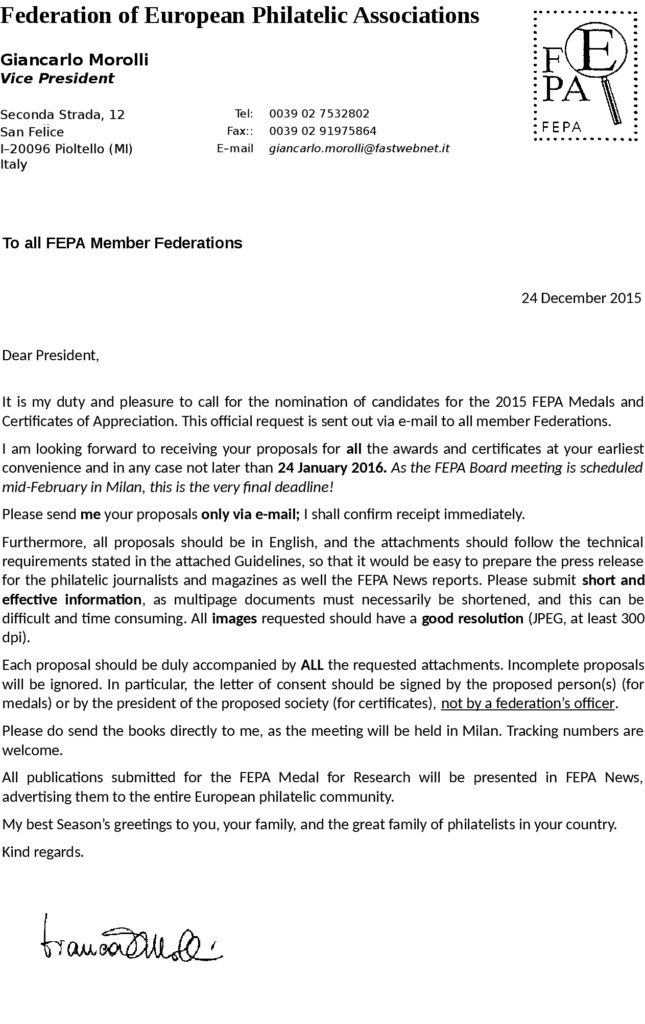 The medal is awarded to a philatelist or an organisation that has provided exceptional service to European organised philately.

The nomination must highlight the nominee’s service to European philately. Hence, nominations based on purely national achievements are not appropriate.

The nomination must be accompanied by:

Only the awardee’s name will be published by the FEPA Board; all other nominations will not be disclosed.

The medal is construed as a literary prize to be awarded to the author(s) of study and research to the furtherance of philately (not necessarily only European philately). Such research should have a European significance rather than just represent the best work of a country, which might be very good but address a subject lacking a continental relevance.

A member Federation can submit more than one nomination, presenting works published from 1.1.2014 to 31.12.2015 in printed form or otherwise.

Nominations concerning the work of more than two people should indicate the name of the leader of such effort. However, the medal is awarded to a maximum of two authors; in case of a larger number, only the leader will receive the medal and all other co-authors will be given a certificate.

Each nomination must highlight the relevance of the study and research.

The nomination must be accompanied by:

Furthermore, one copy of the book must be sent to Giancarlo Morolli. As the book is the basis for the start of the evaluation process, it must be received within the deadline, otherwise the relevant nomination cannot be taken into consideration.

All nominated works will be published in FEPA NEWS. The runners up for the medal will receive a certificate.

FEPA MEDAL FOR SERVICE OR SUPPORT TO PHILATELY

The medal is awarded to an individual, outside the philatelic family, who has provided a significant service or support to European Philately. Due to its nature, the medal is not to be awarded necessarily every year.

The nomination must highlight the nominee’s service to European philately. Hence, nominations based on purely national achievements are not appropriate.

A very short profile of the nominee has to support the nomination.

As the recipient should not belong to any philatelic organisations, his or her colour photo (300 dpi, JPG format) and the letter of consent will be requested after the decision of the Board.

CERTIFICATE OF APPRECIATION FOR OUTSTANDING ACTIVITIES FOR THE PROMOTION OF PHILATELY

It is awarded to Societies (max 5) which have given a significant service or support to European Philately on the regional or local level.

The nomination must highlight the Society’s service for the promotion of philately on the regional or local level.

3.      A letter with the consent of the President of the Society, with signature.

Only the awardees’ names will be published by the FEPA Board; all other nominations will not be disclosed.

® Each nomination,duly signed by the President of the Federation, must be sent by E-mail as PDF document to Giancarlo Morolli:

® Books must be sent to

MINUTES OF THE 2015 FEPA CONGRESS