Blog - Latest News
You are here: Home1 / News2 / Minutes of the annual FEPA Board Meeting 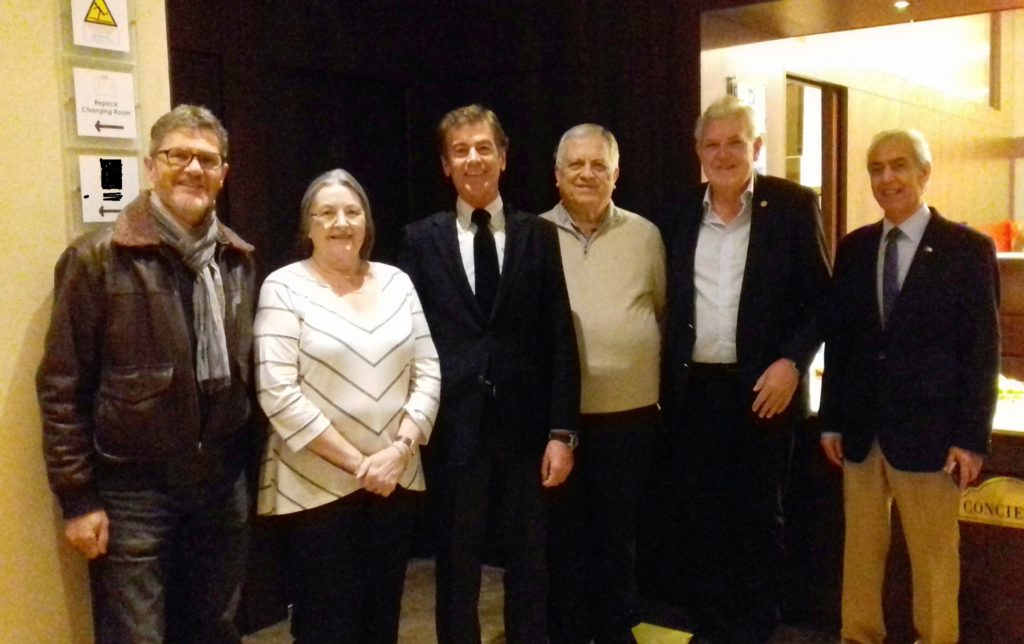 The members of the FEPA Board. From left to right: Bojan Bračič, Birthe King,José Ramón Moreno, Giancarlo Morolli, Alfred Kunz and Nicos Rangos

Part of the meeting was attended by Ari Muhonen, Web master.

Giancarlo Morolli welcomed all attendees as resident and on behalf of Italian Philatelic Federation.

After a report from Giancarlo Morolli and a brief discussion the following decisions were taken:

·         Christo Nikoltchev, Bulgaria, will receive the FEPA Medal for Outstanding Services in Philately.

Certificates as runners up were awarded to:

-Horst Diederichs, The Reshaping of the German Postal System Between the French Revolution (1792) and the Vienna Congress (1814/15).

2 – Amendments of the FIP Statutes and GREX approved at the FIP Congress.

Commented the importance for the European philately of going united, as it happened with the FEPA views on the proposed changes of the FIP Statutes and GREX, decided at the 2016 FEPA Congress in Portugal. The points requested by the FEPA members were accepted and so not presented at the FIP Congress in Taipei.

Mr Morolli pointed out that FREGEX can’t be a copy of GREX but a document by its own. He will present a draft to the FEPA Congress in Tampere.

Birthe King presented the list of activities which would strengthen FEPA’s work to make FEPA and its affiliated federations more united at all levels.

In the discussion it was pointed out that all listed activities are welcome and we find out that a lot of these activities are already running. Nicos Rangos is responsible for database of all European exhibits shown at FIP and FEPA exhibitions.

All seminars international and national can receive FEPA recognition free of charge.

Contents for seminars for exhibitors and jurors should be prepared while there is no change in the requirements for granting the FEPA Recognition of such events.

Both FEPA representatives in FIP Board will be asked to inform the FEPA Board about all decisions of the FIP Board meetings. On the other hand we will inform them about our work.

We will ask them also for the agenda of the FIP Board meetings before they occurred so we can make proposals in advance.

5 – Review of the FEPA vacancies at the FIP Commissions.

Bill Hedley was confirmed as FEPA representative in FIP Commission for Traditional Philately.

Henrik Mouritsen was co-opted to the Postal History Bureau, filling the vacant position on Bill Hedley’s election to the position vacated by Wolf Hess.

Ari Muhonen was co-opted in FIP Commission for Literature bureau.

Koenraad Bracke and Ari Majander were co-opted by the President of the Thematic Commission, Peter Suhadolc.

FIP doesn’t invite FIP commission presidents to the FIP Congress anymore and unfortunately this has resulted, together with other reasons, in the reduction of interest for these positions. As meetings of FIP Commissions are mainly in Asia in last years very few delegates from FEPA attended such meetings so FEPA will consider establishing its own commissions. For the beginning only on tentative basis, coordinating the current delegates from Europe so that they can transmit ideas and wishes from their federations to FEPA.

Mr. Moreno informed that the American Philatelic Society expressed the idea of having a closer collaboration with FEPA. Mr Morolli stressed that such collaboration must be mutual.

It was commented how positive motions presented from members of different Continental federations can be supported by the majority of the FIP members.

8 – What if FEPA organises its own Commissions?

This point was included in point 5.

Mr Rangos and Mr Morolli reported about the expert teams.

9a – SREV for Philatelic Literature.

Mr Morolli informed about changes in SREV for Philatelic Literature, which includes comments from national federations, unions and associations. New SREV should be accepted at the FEPA Congress in Tampere.

10 – Provisional information about the 2016 FEPA Finances.

Treasurer Mr Kunz reported that at present the situation in FEPA finances looks good. After discussion it was agreed that FEPA only pays travelling and hotel costs to Board members attending the annual FEPA Board meeting but their participation at the FEPA Congress shall be refunded only if they are not participating as national delegates at the same time or his/her nation federation doesn’t cover that costs.  For other FEPA events, the FEPA Board members will continue the policy of not charging FEPA for their travel expenses.

The FEPA website is currently registered on Denmark. This registration must be transferred to the current web administrator bearing the necessary cost for such operation, as it amount is supposed to be reasonable and it will give FEPA full independence for maintaining the site. FEPA Webmaster Ari Muhonen was requested to act in this respect prior to the FEPA Congress in Tampere.

Reports from different philatelic events should be allocated two pages only, exceptionally some more. Editor Mr Moreno explained why reports from events are published occasionally on more pages. It is not easy to complete the 84 pages of each number and FEPA members are happy being able to publish their full reports.

Mr. Moreno will send to the Board members the “Project Plan” of FEPA News number 31 before 31st of March.

13 – Report on the Picture Postcard Class.

Regulations for Picture Postcard Class have been already translated into French, Spanish, Polish, Danish etc. In short time will be also in Slovene.

Mrs King asked how to interest more exhibitors in this class? Mr Morolli suggested preparing a seminar with practical examples. A seminar of Deltiology (Picture Postcards) will be organized during the Finlandia 2017 exhibition.

Mr Morolli committed to translate the CIFT booklet about Open Philately into English by July 15th 2017. Exhibitors must be warned to explain at rare non-philatelic material why it is rare.

He also asked to review the point’s scheme currently in place, after the first test period.

Mr Moreno will translate an article about Open Philately published in Belgafila from the Belgian Federation.

FEPA must establish groups of jurors for Open Philately and Picture Postcards Class. To have a start point, the following decisions were accepted:

15 – FEPA Congress in May and elections to the Board.

Until given time the FEPA received only seven apply forms for candidates for members and positions in the FEPA Board – one candidate for each position. So secret ballot election will not be needed.

16 – Agenda for the FEPA Congress.

Agenda for the FEPA Congress proposed by Mr Moreno was accepted with additional point Changes of FREGEX.

17 – Request of the Association of Philatelists, Maximaphilists and Cartophilist from the Republic of Moldova to become a FEPA member.

Once revised the documents presented, the FEPA Board would be very pleased accepting Moldova as a member of the FEPA.

18 – Motion from Sweden to the FEPA Congress.

The Swedish Philatelic Federation suggests to the FEPA to try to change the new FIP regulations regarding Open Philately back to the earlier regulations taken by FEPA.

When possible jurors will try to evaluate exhibits in Open Philately using both regulation and then compare results with could be an interesting exercise.  According to Birthe King’s experience on the subject over several years, it has been shown that a good Open Philately exhibit will score very similar when using both scoring systems.

19 – Responsibilities within the FEPA Board.

The different responsibilities of the Board were distributed amongst the members.

Mr. Moreno did a review of all the FEPA events of 2016, looking for the best possible help to our members.

21 – FEPA Symposium of Youth Philately in Finland and others.

Mr Bračič reported that he received short informations from all speakers to the Symposium in Tampere except one, by now. The symposium will start with presentation of the approaches taken in the various countries for working with youth, followed by the explanation of concrete activities in working with young philatelists.

At present FEPA has only two flags. Because of the many requests for FEPA patronage, support or recognition, there is the need for more flags, so we should acquire offers for three another flags.

Mr Rangos proposed a FEPA Pin as occasionally FEPA award. It should be in white and blue colours. Offers for such pins should be requested. First opportunity would be in 2019 on occasion of the 30th FEPA anniversary.

Next meeting of the FEPA Board will be in Tampere on Saturday, May 27th at 14.00 to prepare the next day Congress.

We think that it would be fine for most FEPA members if the next FEPA Congress will be in Prague during the Prague 2018 exhibition (August 15th to 18th), as they will be represented by Commissioners and jurors.

José Ramón Moreno expressed to Giancarlo Morolli and to the Italian Federation the gratitude of the whole Board for their excellent arrangements for the celebration of the meeting and for their generosity.

Elections at the Romanian Philatelic Federation

Important notice: CHANGE THE PLACE OF CELEBRATION OF THE FEPA CONGRESS
Scroll to top