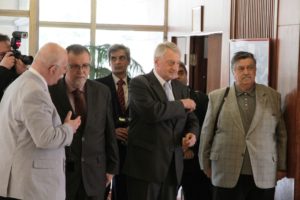 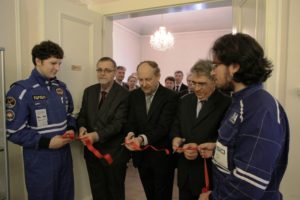 From the 12th to the 17th of  April was held the “Eurospace 2016″ International Astrophilatelic Exhibition at the Russian Centre of Science and Culture in Prague with FEPA Recognition and the participation of philatelists from Austria, Czech Republic, France, Germany, Italy, Russia, Slovakia, Spain and Switzerland.

The exhibition was organized by the Union of Czech Philatelists and the Russian Centre of Science and Culture. The exhibition received the FEPA Recognition. The event was devoted to the 55th anniversary of Yuri Gagarin’s space flight. The delegates of the FIP Section for Astrophilately and the members of the Russian National Academy of Philately took active part in all the activities organized in the frame of “Eurospace 2016″. 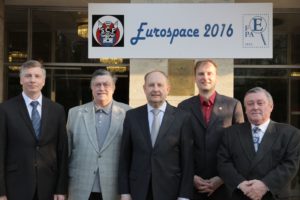 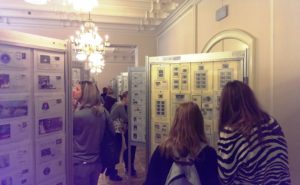 Right: View of the exhibition hall

Were awarded with Gold medals Margaret Schneider (Austria), Umberto Cavallaro (Italy), Jean-Louis Lafon (France) and Ivan Pehanek (Czech Republic). The main prize, a crystal trophy offered by Vladimir Remek, the first astronaut of Czechoslovakia, was  received by the Russian philatelist  Sergey Poznachirko for the exhibit “Chronicle of the space age”. The Special Prize of the Russian Center for Science and Culture in Prague was awarded to the Italian philatelist Umberto Cavallaro for his exhibit  “Italians in space.”

On the occasion of “Eurospace 2016″, Soviet cosmonaut-veteran Vladimir Kovalyonok visited Prague’s Planetarium where he had a meeting with about 250 Czech school children