The silvered tray they received was engraved with this text:

THE FEDERATION OF EUROPEAN

FOR HIS EXCEPTIONAL CONTRIBUTION

TO THE EUROPEAN PHILATELY 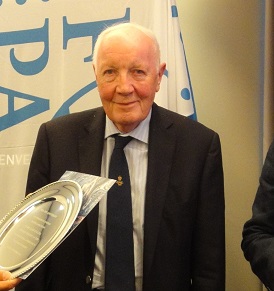 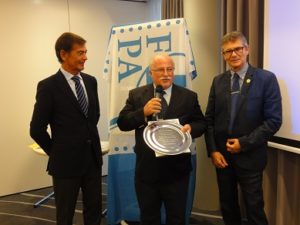 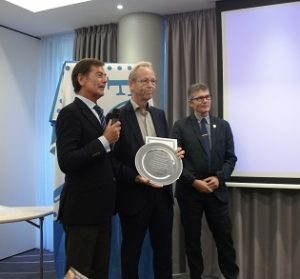 MESSAGES FROM OUR HONORARY PRESIDENTS

I greatly appreciate the kind invitation from our current President José Ramón Moreno to write a few words on the occasion of the 25th Anniversary of the formation of the Federation of European Philatelic Societies (FEPA).

The early history of the meetings held during 1987-89, which led to the formation of FEPA in 1989 was recorded in a FEPA Handbook published almost exactly twenty years ago and distributed at the FEPAPOST ’94 exhibition which was held in The Hague.

By that time FEPA had become ﬁrmly established alongside FIAF and FIAP as an Associate Member of FIP and was conﬁdently looking forward to the challenge of building up the position of European philately both within Europe and on a worldwide basis.

During the subsequent twenty years much has changed in the world of philately, and all those who love and continue to support the hobby face even greater challenges to—day if we are to maintain its appeal to future generations. To do so will require ever closer collaboration between philatelic organisations at local, national and international levels, and Continental Federations, such as FEPA , have an important ongoing role to play as we see the proﬁle of collecting progressively changing from often being the result of a common childhood experience into a more selective and specialized adult pursuit.

Having been directly involved personally with the initial formation of FEPA it gives me very great pleasure to see it celebrate its 25″‘ Birthday and wish it every success in the future. In addition I would like to express my warm appreciation to all those who have given, and continue to give, their time and commitment to achieve the objects set out in the FEPA Constitution for the beneﬁt of the wider philatelic community.

FEPA 25 Years
FEPA is celebrating this year an important date in its life.

I am very proud because I had the opportunity to work as President  in FEPA during 1/3 of its life!

Europe has different people, different countries, different languages. It is very difficult a FEPA President to maintain the unity of Europe …. and the other feel this and they are many times getting profit from this reality!

The FEPA target must be only the interests of the European National Federations.

However we have some people, who did not understand this reality and they are many times not defending the interests of the European exhibitors and National Federations, but mainly their personal interests. This never can happen.

It will be good in the future, if Europe is able again to elect in FIP Board their own representatives. This means that their representatives must defend the European interests and not also the South-American or Asiatic interests.

I did it during my 8 years as FEPA President, and I only request the same to everybody, who are working in FEPA Board.

Philately is today something very serious to be spoilt by people, who is not interest in the philately.

So I must congratulate FEPA by its 25 years, and I expect that FEPA can be better and better in the next 25 years, where Europe can be in reality the stronger Continent.

I must wish to the new FEPA Board the best success and I am sure that José Ramón Moreno is a very competent man to do it, followed by their colleagues.

The future and success of FEPA and European philately is only in our hands! It will be what we wanted!

My personal wishes at the 25th anniversary of FEPA.
First of all I will like to congratulate the 43 Member Associations and the FEPA Board with the 25 anniversary. Since the founding meeting in Bucharest back in 1989 the number of members is steady increased and FEPA counts actually most of the countries within Europe.

I see this development as a clear acceptance of the Founders idea: “Together we are stronger”.

All the FEPA associations actually face the same challenges – the numbers of organized philatelists are declining and the average age is increasing. How do we bend this trend? There is no simple answer to this challenge. But the result of 43 brains sharing their “best practices” among each other means to me that each individual member is better prepared for the future.

I wish for our hobby Philately – FEPA and all the national Member Associations a good luck for the next 25 years. Together we are stronger.
Jørgen Jørgensen, Honorary President

Certificates of gratitude to the FEPA Federations organizers of FEPA events...