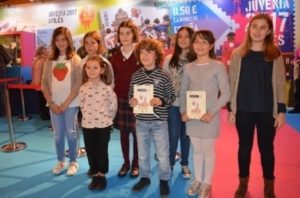 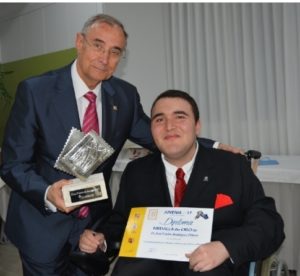 (English translation of the whole article at the end) 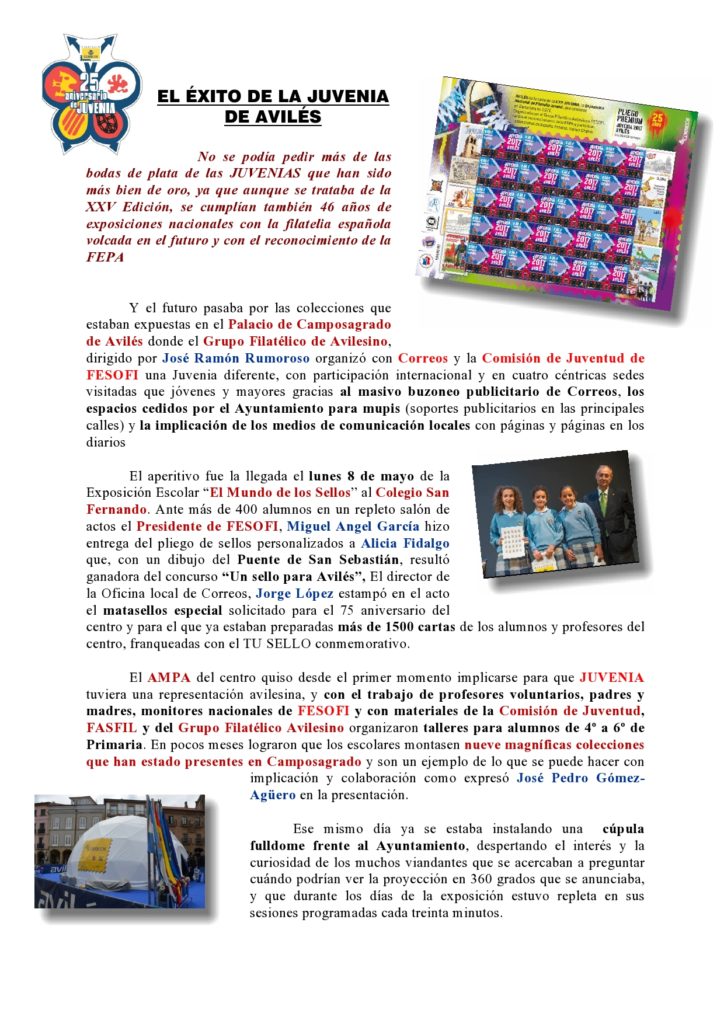 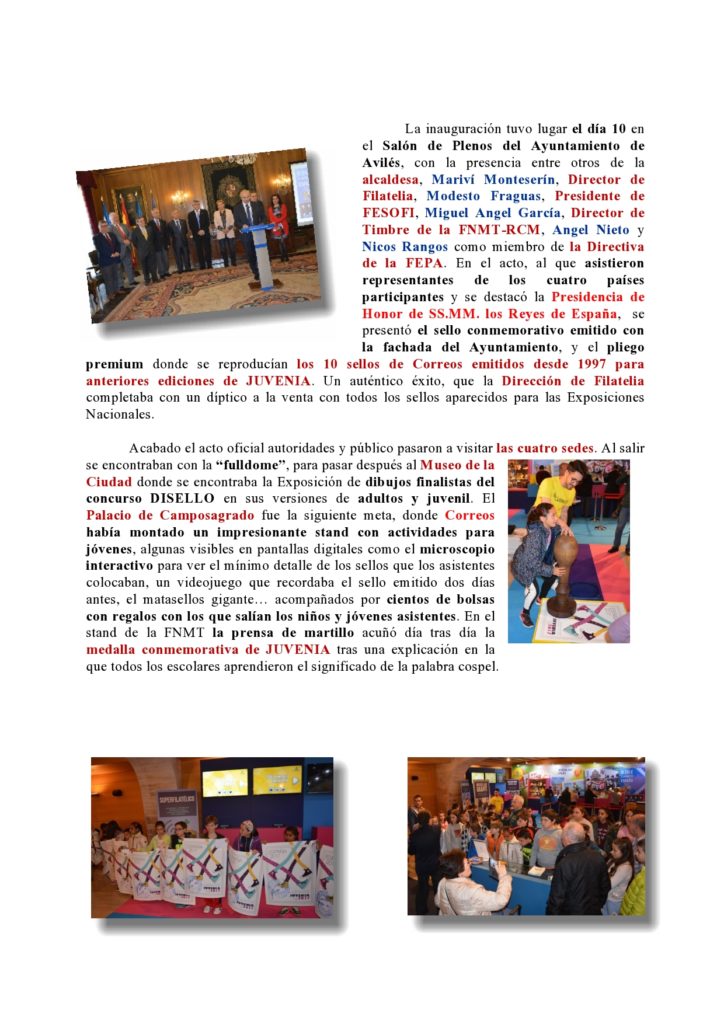 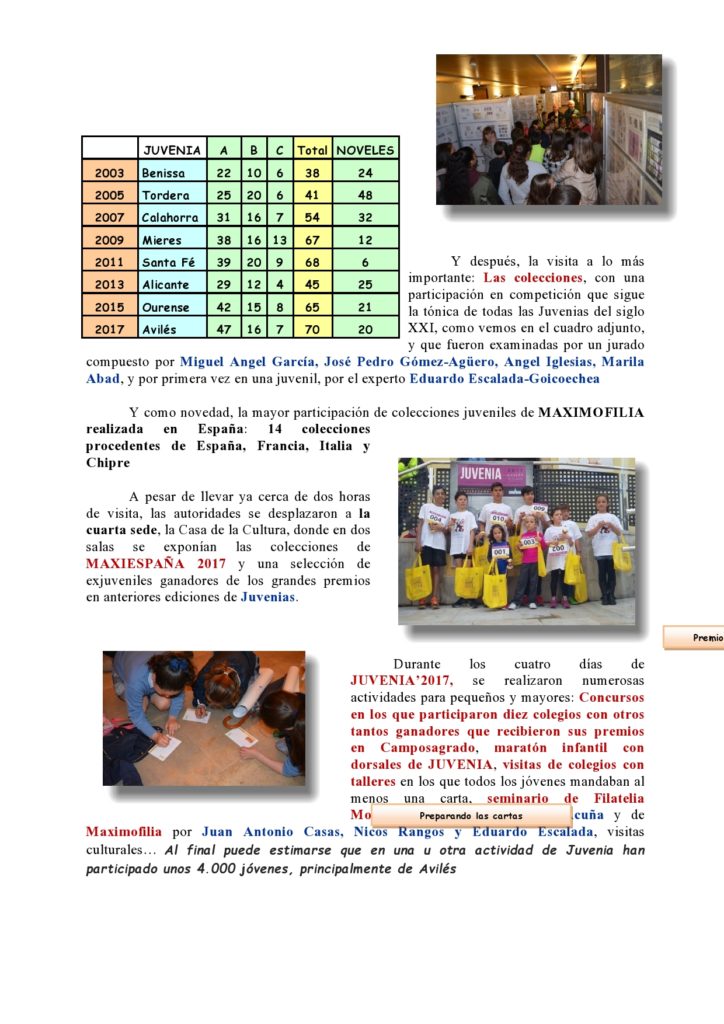 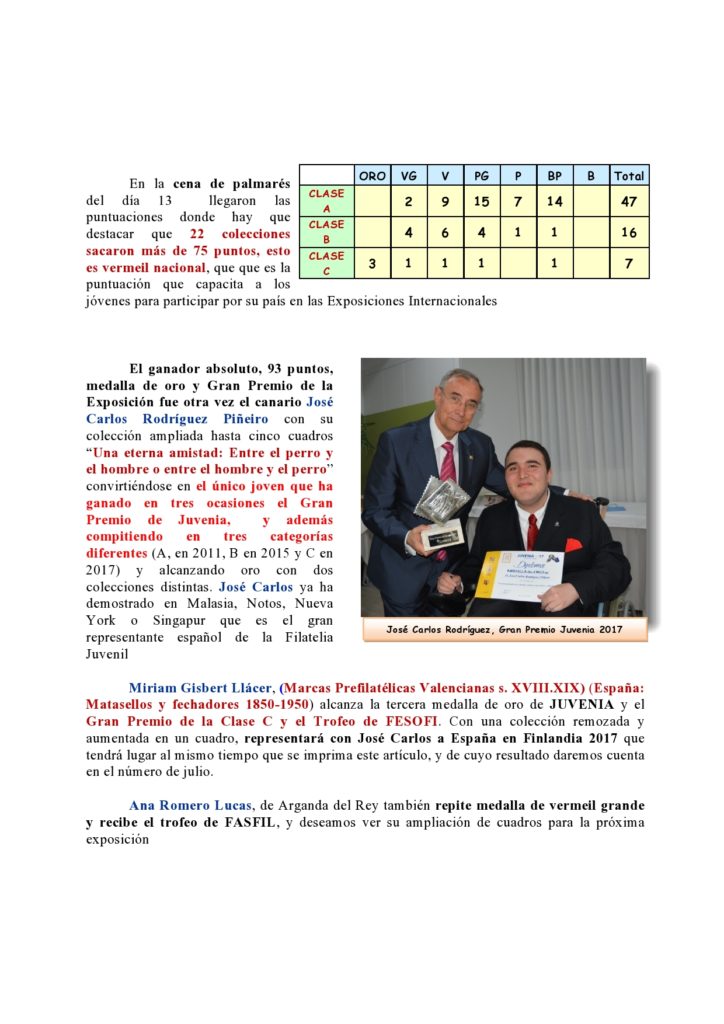 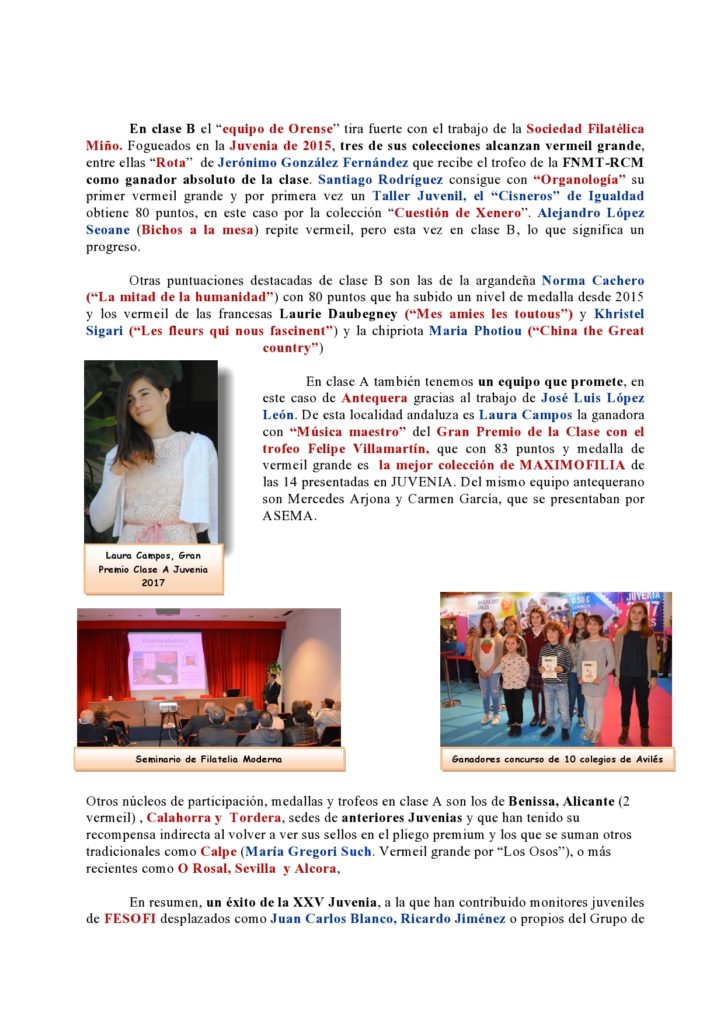 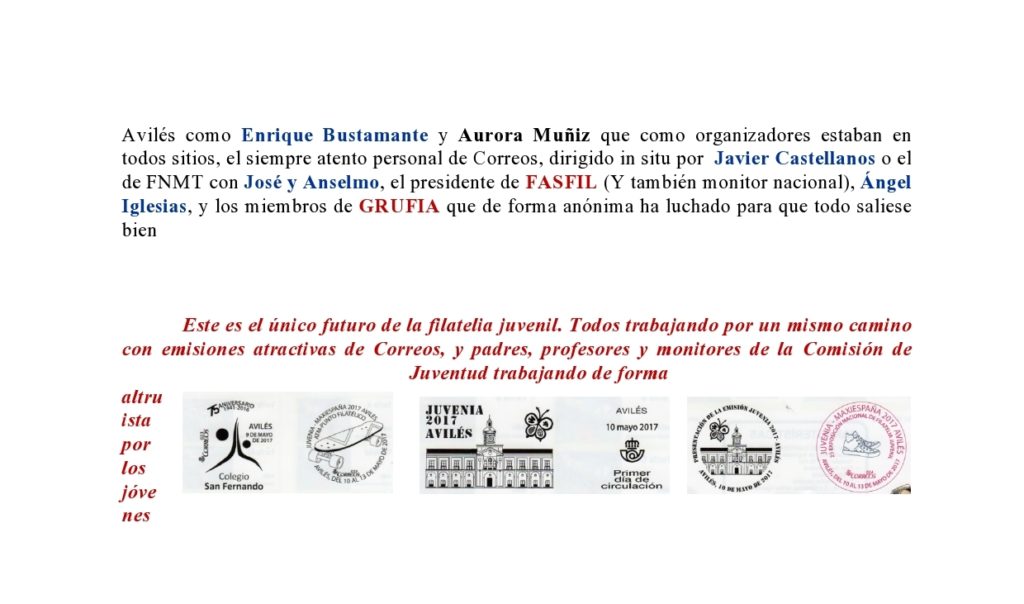 You could not ask for more on the silver weddings of the JUVENIAS that in fact have been more gold weddings, since although it was the 25th Edition, there were also 46 years of national exhibitions with Spanish philately turned the future and with the Recognition of FEPA

And the future passed through the collections that were exhibited in the Palace of Camposagrado of Avilés where the Philatelic Group Avilesino, chaired by Jose Ramon Rumoroso organized with the Spanish Post “Correos” and the Youth Commission of  the Spanish Federation, FESOFI, a different Juvenia, with international participation and in four spaces provided by the City Council that also provided advertising media in the main streets, adding on top of that the involvement of the local media with pages and pages in the newspapers.

The appetizer was the arrival on Monday May 8 of the School Exhibition “The World of the Seals” to the San Fernando School. In front of more than 400 students in a packed auditorium, FESOFI’s President Miguel Angel García presented the personalized sheet sheet to Alicia Fidalgo, who, with a drawing of the San Sebastián Bridge, was the winner of the “A stamp for Avilés” , The director of the local post office, Jorge López immediately stamped the special postmark requested for the 75th anniversary of the center and for which more than 1500 letters were already prepared by the students and teachers of the center, franked with the commemorative personalized stamp.

The Association of the Mothers and Fathers of Pupils was from the first moment  involved so that JUVENIA had an Avilesian representation, and with the work of volunteer teachers, parents and mothers, national monitors of FESOFI and with materials from the Youth Commission, FASFIL and the Philatelic Group of Aviles organized Workshops for students from 4th to 6th grade. In a few months they managed to have the students assemble nine magnificent collections that have been present in Camposagrado and are an example of what can be done with involvement and collaboration as expressed by José Pedro Gómez-Agüero in the presentation.

The Opening Ceremony took place on the 10th in the Plenary Hall of Avilés City Hall, with the presence of the mayor, Mariví Monteserín, Philatelic Director, Modesto Fraguas, FESOFI President, Miguel Angel García, Royal Mint Director Angel Nieto and Nicos Rangos as a member of the FEPA Board. At the ceremony, which was attended by representatives of the four participating countries and highlighted the Presidency of Honor of SS.MM. The Kings of Spain, the commemorative stamp issued with the façade of the City Council was presented, and the premium sheet where the 10 postage stamps issued since 1997 for previous editions of JUVENIA were reproduced. A real success, which the Philatelic Director completed with a diptych on sale with all the stamps that appeared for the National Exhibitions.

Finished the official act authorities and public happened to visit the four venues.

The collections, with a participation in competition that follows the trend of all the Youth of the XXI century, were examined by a jury composed by Miguel Angel Garcia, José Pedro Gómez-Aguero, Angel Iglesias, Marila Abad, and for the first time in a juvenile, by the expert Eduardo Escalada-Goicoechea

And as a novelty, the largest participation of MAXIMOFILY Youth collections in Spain: 14 collections from Spain, France, Italy and Cyprus.

During the four days of JUVENIA’2017, there were numerous activities for young and old: Contests in which participated ten schools, children’s marathon with JUVENIA backs, visits of schools with workshops in which all youth sent at least one letter, Seminar of Modern Philately by Rafael Acuña and Seminar on Maximofily by Juan Antonio Casas, Nicos Rangos and Eduardo Escalada, cultural visits etc… In the end it can be estimated that in one or another activity of Juvenia have participated some 4,000 young people, mainly from Avilés

At the awards dinner was noted that 22 collections received more than 75 points, this is national vermeil, which is the score that enables young people to participate by their country in the International Exhibitions

The absolute winner, 93 points, gold medal and Grand Prix of the Exhibition was once the canary José Carlos Rodríguez Piñeiro with his collection extended to five paintings “An eternal friendship: Between the dog and the man or between the man and the dog”. He become the only young man to win the Juvenia Grand Prix on three occasions, competing in three different categories (A, in 2011, B in 2015 and C in 2017) and reaching gold with two different collections. José Carlos has already demonstrated in Malaysia, Athens (Notos), New York or Singapore that he is the greatest Spanish representative of the Youth Philately

Miriam Gisbert Llácer, (Prefilatélicas Valencianas XVIII.XIX) (Spain: Matasellos and dates 1850-1950) reaches the third gold medal of JUVENIA and the Grand Prix of Class C and the Trophy of FESOFI. With a collection enhanced and enlarged in a frame, will represent Spain together with José Carlos, in the next  Finlandia 2017.

Ana Romero Lucas, from Arganda del Rey also repeated a large vermeil medal and received the FASFIL trophy, and we want to see her enlargement of frames for the next exhibition.

In class B the “Orense team” pulls strongly with the work of the Philatelic Society Minho. Fouled in Juvenia in 2015, three of its collections reach large vermeil, among them “Rota” of Jerónimo González Fernández that receives the trophy of the Royal Mint as absolute winner of the class. Santiago Rodríguez,  Alejandro Lopez Seoane,  Norma Cachero , the French Laurie Daubegney and Khristel and Cypriot Maria Photiou were also amongst the winners, showing outstanding improvement.

In class A we also have a team that promises, in this case Antequera thanks to the work of José Luis López León. From this Andalusian town, Laura Campos was the winner of the Grand Prix of the Class.  And was the best MAXIMOFILY collection, also the members of ASEMA, Mercedes Arjona and Carmen Garcia.

In short, a success of the XXV Juvenia, which have been contributed by FESOFI youth monitors displaced as Juan Carlos Blanco, Ricardo Jiménez or the Group of Avilés as Enrique Bustamante and Aurora Muñiz as organizers were everywhere, always attentive. Correos’s staff, led on the spot by Javier Castellanos or FNMT with José and Anselmo, the president of FASFIL,  Angel Iglesias, and members of GRUFIA who anonymously fought for everything to work out.

This is the only future of youth philately. All working along the same path with attractive postings, and parents, teachers and monitors of the Youth Commission working altruistically for young people.

In a few days is opening the biggest European event of the year: FINLANDIA ...
Scroll to top