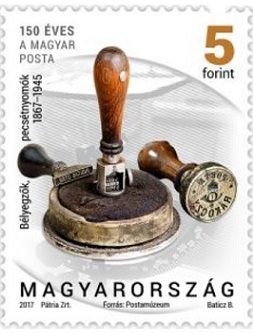 Magyar Posta is launching the renewal of its definitive stamps by releasing a series of stamps on postal history, starting with six stamps in 2017. The series containing self-adhesive stamps with face values of HUF 5, 10, 30, 100, 200 and 300 designed by the graphic artist Barnabás Baticz are produced by Pátria Nyomda Zrt. in quantities dependent on demand. The new issues will be available at first day post offices and Filaposta in Hungary from 4 May 2017, but may also be ordered from Magyar Posta’s online store.

Definitive stamps and stamp series are important publications of postal administrations that convey the values and characteristics of the issuing country and the issuing postal operator. Magyar Posta, celebrating the 150th anniversary of becoming independent, is starting the release of a new definitive stamp series under the title of Postal History 2017. The stamps of the series feature typical or unusual objects and work tools related to the postal service from its beginning until the present day. When designing the graphics, an important consideration was that the stamps support their basic function of paying postage with clearly visible face values. In order to make their use simpler and faster, the stamps are self-adhesive.

The HUF 5 denomination’s characteristic postal work tools include postmark stamps and handstamps. Standing in the middle there is a date and place stamp, which has rotating wheels to change the date. These contemporary handstamps were made for the Royal Hungarian Post primarily by Antal Klassohn’s firm under the name First Hungarian Stamp Factory. Resting on the stamp pad, there is a rectangular handstamp with the inscription FORWARDED LATER, used at post offices dispatching mail only once a day, while an engraved handstamp bearing the emblem of the crown and post horn lies to the right of the pad.

The HUF 10 stamp depicts a horse-drawn parcel delivery cart which served areas not covered by the railway network. In cities it collected letters and delivered parcels from the start but its use gradually declined until it was finally phased out (in Budapest in 1958).

The main motif of the HUF 30 stamp is a post box with an emptying mechanism, which was introduced in 1894 and significantly accelerated the collection of mail. These post boxes became such characteristic items of the Hungarian Post due to their red colour and distinctive shape with a tent roof and ridge decoration that similar post boxes are still in use today.

The post office sign with the arms of Hungary appears on the HUF 100 stamp. When on 1 May 1867 the Royal Hungarian Post gained independence with regard to its internal affairs, the most important measures of its first Postmaster General Mihály Gervay emphasised the institution’s national character. These included changing the post office signs. The German language signs with the Austrian arms were replaced within a very short time by new ones with a uniform design bearing the arms of Hungary.

The HUF 200 stamp shows a cap of the uniform introduced for postal carriers. It was made of dark blue cloth and was modelled on the shako, the military cap of the Hungarian hussar. A golden button bearing the crown and post horn is linked by a metal thread braid to the rosette, which is also made of a metal thread and is decorated with the Hungarian royal crown. The metal control number sewn above the black peak served to identify deliverymen in the capital city and was in use until the Second World War.

The HUF 300 stamp features a post horn. This instrument has been used since the Middle Ages and is today a common symbol of the post, representing the postal administration of many countries supplemented by their national colours and insignia. From the middle of the 19th century horse-drawn postal vehicles were only used to carry mail items and the post horn was a distinguishing sign on these routes. After 1867, the cord which the driver used to hang the horn on his shoulder or around his neck was in the Hungarian national colours under the new regulations.

We trust that the new Postal History 2017 stamps will become distinctive issues for our Company, frequently appearing on mail items.