You don’t need to wait for the printed version of FEPA NEWS, the whole magazine is already available here on the website. Do your philatelic friends a favour – tell them about this possibility!

Call for Candidates to the 2010 FEPA Awards

Read the procedures to be followed when nominating candidates for 2010 and see the winners of FEPA Awards and FEPA Certificates of Appreciation from previous years.

Change of FIP Statues.
The following motions passed the Congress:

Article 24.2 – this article was abolished.
Article 30.4 – the wording of this article was changed to:
All Continental Federations are to be represented on the FIP Board by a minimum of one Vice President and one Director.

Open Class:
The Open Class stays another 2 year as an Experimental Class.

Once again ECTP 2011 will be organized in Essen by the Association of Philatelists in North-Rhine-Westphalia.

ECTP is recognized by The European Federation of Philatelic Federations (FEPA) as official European Championship for Thematic Philately.

Will be held in the Museum of Turkish and Islamic Arts in the Ibrahim Pasa Palace in Istanbul from 5 to 15 December 2010. The exhibition is part of the Istanbul 2010 European Capital of Culture Project.

Participation:
Istanbul 2010 is open to all collectors and collections restricted to the timeframe 1840-1940 relating to the Ottoman Empire and the Turkish Republic. For more details please inspect the Bulletin.

From Monuments to Collectibles

At the FEPA Congress in Essen in 2009 it was decided – at future FEPA Congresses – to devote more time for discussion of  our core business “the development of philately”.

The first try were the FEPA Congress in Antwerp. Here Giancarlo Morolli chaired a discussion labeled “From Monuments to Collectibles”.

The following documents from the discussions are now available:

Report prepared after the meeting by Giancarlo Morolli.

It is important to stay updated about new trends within the area discussed above. YOU are most welcome to share your knowledge and experience with other philatelists.

All relevant contribution sent to jrgen@jrgensen.dk will be published on www.fepanews.com.

The Roll of Distinguished Philatelists

have been asked to sign The Roll of Distinguised Philatelists.

The Signing Ceremony will take place Friday 23rd July, during the 2010 Philatelic Congress of Great Britain.

Dr. Alan Huggins, RDP, founding Chairman of FEPA, has been awarded the FEPA Medal 2009 for his exceptional service to organized philately.

Dr. Alan Huggins has been extremely prominent in European Philately for many, many years. His position as Founding Chairman of FEPA is one aspect of his truly outstanding services to FEPA, as well as that as Chairman of the Postal Stationery Commission of FIP.

A Distinguished Philatelist, he was the chairman of the Royal Philatelic Society and the Great Britain Society.

Nino Aquilla and Francesco Orlando (Italy) is awarded the FEPA Medal 2009 for exceptional philatelic study and research with “Sicilia – I timbri del nuovo Re” (Sicily – The postmarks of the new King) published by Giulio Bolaffi. 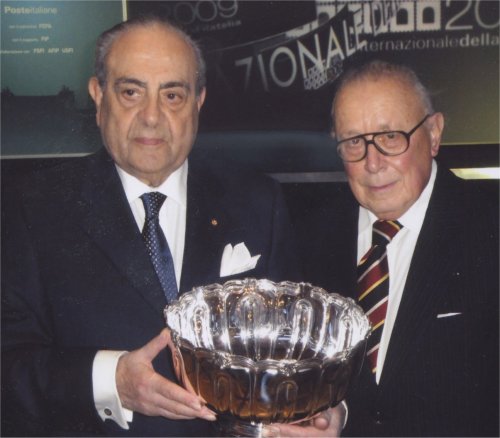 Nino Aquila and Francesco Orlando recieved the “Best in Class” award for their book at Italia 2009 in Rome.

The Organizing Committee has informed as follows:

Out of organisational reasons, the PHILALUX 2010 Organizing Committee has decided that the European stamp exhibition will not be held from July 1st to 4th 2010, but will be postponed to April 28th to May 1st 2011.

First of all, we would like to ask you to confirm the national commissioner from  your country or nominate a new one for PHILALUX 2011. The same applies to the jury members you nominated. This information must be sent by mail to the Commissioner General (joswolff@gmail.com) or to the Assistant Commissioner General (feckclau@pt.lu) before May 1st 2010.

As soon as your commissioner will be registered, we will send out the modified IREX (only changes of date) for PHILALUX 2011.

The registration forms for classes 2, 3, 4 and 6 (Traditional, Postal History, Thematic and One-Frame) that we have received for PHILALUX 2010 will be taken into consideration for PHILALUX 2011. Within a few weeks, your national commissioner will receive a list with these exhibits. We kindly ask to confirm that the owners of the listed collections still want to participate at PHILALUX 2011. The national commissioner has also the possibility to nominate new exhibits. If he wants to nominate new exhibits, he must ask for new entry forms and they will be sent to him.

The entry forms that we have received for classes 5 and 7 (Literature, Youth) till today are cancelled (date of publication, change from group A to B, …) . New entry forms are required for those two classes.

You can read most of the major articles here (link broken).

Candidates to the 2009 FEPA Awards

The following information has been distributed by e-mail to all member Federations:

“Dear President,
I am pleased to send you the Regulations and Procedures for the 2009 FEPA Medal, Awards and Certificates of Appreciation .

Kindly note that the nominations should reach me not later than 15 December 2009.

Please do not send any book until the Board has made the first selection. Just fill the proposal in detail as explained in the attached paper.

In case you send me nominations via regular post please send me also an e-mail with a scan of the proposals and the related form for the certificates. This way we could reduce the risk of missing an answer due to the heavy postal traffic before Christmas.

Click here to read the procedures to be followed for nomination of the candidates for the FEPA Medal and the Certificates of Appreciation (link broken).