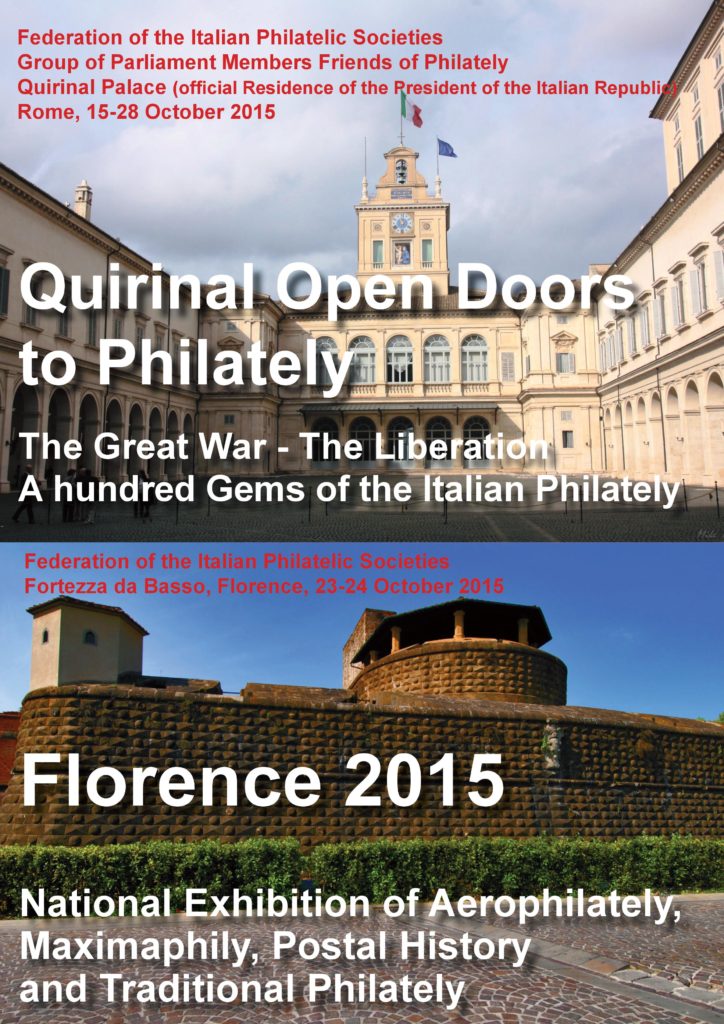 On 23 and 24 October the Italian philatelists meet in Florence, at the national exhibition “Florence 2015”. The town of Donatello and Michelangelo hosts exhibits of Aerophilately, Maximaphily, Traditional Philately and Postal History of the 20th Century. As a matter of fact, since many years the Italian Federation has chosen to hold more national exhibitions each year, large enough to include three or four classes. In 2015, two other exhibitions are held in Vasto (Abruzzo), and Martinengo (Lombardy). In a number of them, a foreign federation is invited as official guest: so the German philatelists of the BDPh have they exhibits on display in Florence, at the prestigious Fortezza da Basso, a fort inserted in the fourteenth century walls of the town, heritage of the Medici dynasty.

The fast train that takes just ninety minutes from Florence to Rome will provide a good opportunity for visiting a very special exhibition, outstanding for both the venue and the contents: “Quirinal Palace Open Doors to Philately”. The Quirinale palace, seat of the Popes, the Kings and now of the Presidents of the Italian Republic, hosts a top philatelic event arranged according to the criteria peculiar to cultural exhibitions. Items are displayed on ample panels with large format captions, and postal documents are presented aiming at gaining the attention of a large public, without ignoring their philatelic highlights. The exhibition covers three subjects. The first concerns the Great War (Italy entered it in 1915), the second the 70th anniversary of the Liberation, while the third, last but not least, presents hundred items among the rarest and most important of the Italian philately since 1850. By the way the exhibition is open from 15 to 28 October (two weeks!). Free admission.

Arrivederci a Firenze e Roma! See you in Florence and Rome!