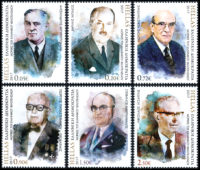 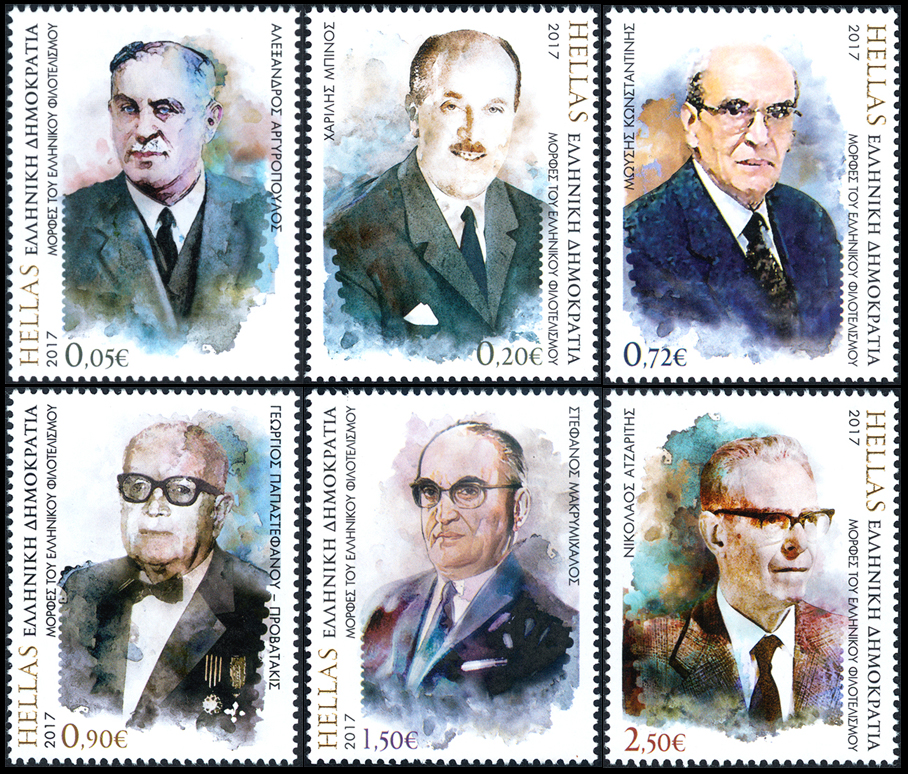 In the long history of stamp collecting in Greece, there have been many leading philatelists whose passion and enthusiasm have made a major contribution to the development and spread of philately, by publicizing and promoting Greek stamps, both domestically and internationally.

Five of these important personalities joined by the veteran philatelic consultant of the Hellenic Post are depicted in the new commemorative set of six stamps, issued by the Hellenic Post on 16 November 2017, in panes of 25, designed by Ms. Marina Lassithiotaki.

Charilis Binos (1909-1978) (€ 0.20, quantity 750.000): A prolific philatelic researcher and writer, he served first president of the Lesvos Philatelic Society after its re-opening (1960). He received major awards at both national and international level. He was elected associate member of Académie de philatélie in 1964.

Moses Constantinis (€ 0.72, quantity 750.000): Philatelic Consultant to the Hellenic Post since 1970. A regular or honorary member of numerous philatelic organizations. The most important among his many writings is his lifetime work, The post offices in Greece, their history and their evolution (2002).

Georgios Papastefanou-Provatakis (1890-1978) (€ 0.90, quantity 750.000): Founder and first president of the Philatelic Society of Athens (1937), as well as great donor of the Philatelic Olympic Museum in Olympia, where he displayed his great Olympic collections. In 1965 he was named an honorary member of the International Olympic Committee for his contribution to the Olympic Ideal.

Nikolaos Atzaritis (1900-1976) (€ 2.50, quantity 100.000): A sculptor, engraver, painter and an expert on the large Hermes heads and Hellenic pre-philately. He reconstructed the 20 lepta large Hermes heads plate, using stamps of the 1862-67 issues. A tutor of many younger collectors of his time.

FEPA CONGRESS 2018: All the details