Blog - Latest News
You are here: Home1 / News2 / Philotelia into the digital age 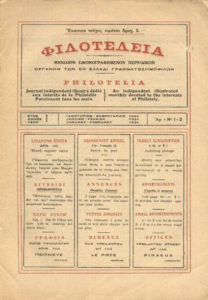 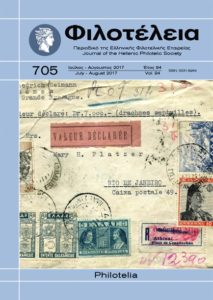 In July, the scanning of Philotelia, the journal of the Hellenic Philotelic Society (HPS, www.hps.gr), was completed, i.e. from the first number of 1924 until the last of 2001. Soon, this valuable archive, together with the numbers from 2002 until today, which are digitally stored as a common practice, will be accessible via the internet at a modest fee for the user. This valuable work of digitizing the older numbers was carried out gratis, in the premises of the Historical Archives of the National Bank of Greece by its experienced staff, on the initiative and under the supervision of the good friend of the HPS and Head of the Archives, Gerassimos Notaras.

Philotelia is bimonthly, produced in 17×24 format and 64 pages per number. Its research articles cover mostly the philately of Greece and areas and are bilingual in Greek and English. Since 2002, its annual volume is available on CD. During its long history the journal has received numerous awards and distinctions. The latest -most distinguished- was in 2010, when Philotelia was honored by the Académie Européenne de Philatélie (AEP) with the Prix AEP de la Presse Philatélique.

SPRING STAMPEX 2018 WILL INCLUDE EPHEMERA EXHIBITS

Board of the Union of the Bulgarian Philatelists: Corrected information
Scroll to top