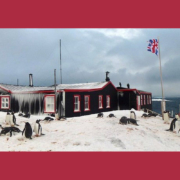 A British charity (the UK Antarctic Heritage Trust) is searching for people to spend five months in Antarctica, to run the world’s most remote post office.

Candidates are required to have good level of physical fitness, environmental awareness and a knowledge of minimum impact living. They will be tasked with running the gift shop and post office, as well as conducting a penguin count as part of efforts to protect the Gentoo penguin colony. The team will also look after the artefacts and museum inside Bransfield House.

People wishing to apply for the role can do so on the UKAHT website, with the final deadline being 23:59 BST on Monday 25 April. Those successful will do a week’s training in Cambridge in October 2022, before leaving for Antarctica later in the year, where they will live and work until March 2023.

HELVETIA 2022 second miniature sheet to be released
Scroll to top