An international philatelic exhibition, organized by the Union of Philatelists of Armenia, opened on October 25th in Yerevan History Museum dedicated to the 2800th anniversary of Yerevan’s foundation.

The exhibition featured over 20 collections of participants, including six from the US.

During the event, a special two-sided postcard, dedicated to the International Philatelic Exhibition has been cancelled by “HayPost” CJSC with a special postmark in the premises of Yerevan History Museum within the framework of the International Philatelic Exhibition dedicated to the 2800th anniversary of Yerevan arranged by the Union of Philatelists of the Republic of Armenia. 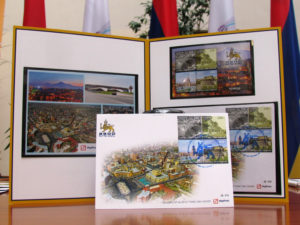 On November 29th, 2018 a souvenir sheet with four stamps dedicated to the theme “Armenian history. 2800th anniversary of the foundation of Yerevan” has been put into circulation by “HayPost” CJSC in the premises of Yerevan Municipality. 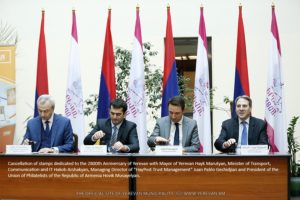 The postcard depicts a fragment of a panoramic view of night Yerevan at the background of Mount Ararat, “Zvartnots” airport, the aerial view of the Republic Square and a photo taken from the stairs of Cascade. The souvenir sheet was cancelled by the Acting Deputy Minister of Transport, Communication and Information Technologies Armen Arzumanyan, the Director of the Yerevan History Museum Armine Sargsyan, the Chairman of of “HayPost” Juan Pablo Gechidjian, the President of the Union of Philatelists of the Republic of Armenia Hovik Musayelyan.

Yerevan is the capital and largest city of Armenia as well as one of the world’s oldest continuously inhabited cities. Yerevan is the administrative, cultural, and industrial center of the Republic of Armenia. It has been the capital of the Soviet Armenia, and modern, the third First Armenian Republic, the Second or republic existing since 1918. The city also serves as the seat of the Araratian Pontifical Diocese of the Armenian Apostolic Church.

Yerevan was named the 2012 World Book Capital by UNESCO. Yerevan is an associate member of Eurocities. Dozens of world capitals are sister cities of Yerevan.

On November 7, 2017, a souvenir sheet with five stamps was put into circulation at the Museum of History of Yerevan  during of the exhibition dedicated to the 200th anniversary of Aivazovsky. The stamps are entitled “World Famous Armenians: 200th Birth Anniversary of Hovhannes Aivazovsky”.

“Hovhannes Aivazovsky is a great individual for both Armenian and foreign art lovers. Such exhibitions and the redemptions of such stamps are of major significance for us Armenians. They serve as a wonderful way of helping the world’s philatelists recognize great Armenians and become familiar with their works,” President of the Union of Philatelists of Armenia Hovik Musayelyan stated. 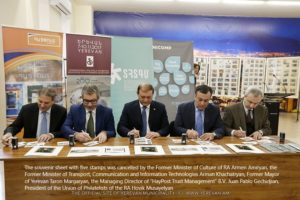 The souvenir sheet  was cancelled by the RA Minister of Culture Armen Amiryan, the RA Deputy Minister of Transport, Communication and Information Technologies Arman Khachatryan, Mayor of Yerevan Taron Margaryan, the Managing Director of “HayPost Trust Management” B.V. Juan Pablo Gechidjian, President of the Union of Philatelists of the RA Hovik Musayelyan.

Aivazovsky’s anniversary has been included in the UNESCO’s list of memorable dates.His works are preserved in major museums around the world, including in the Louvre in Paris and the Hermitage Museum in St Petersburg, as well as in some private collections.

Unique in the world?