Blog - Latest News
You are here: Home1 / Updates2 / A friend and a teacher have left us 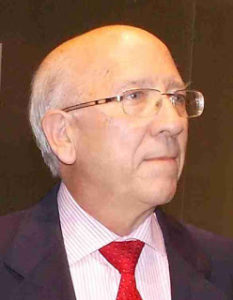 A friend and a teacher have left us

Mr. Francisco Gilabert, known by all as “Paco” has passed away at the age of 72.  He was awarded with the highest decorations of the Spanish Post and the Philatelic Federations of Spain, Italy, Argentina, Costa Rica, Cuba, Ecuador, Honduras, Panama, and the Dominican Republic. He was the main organizer of the successful FIP Exhibitions “Granada 92” and “Lorca 98” both at his town of Granada and of course of the 29 editions of the “Capitulaciones de Santa Fe” international cycle of yearly international exhibitions for the Hispanic-American Federations.

His simplicity, his kindness or his good character, did not prevent him from imposing his enormous personality and his exceptional didactic skills. He always knew what words and arguments to use to convince his friends (very often also disciples) how to orient their collections or which philatelic items were the most appropriate to be used.

His studies led him to graduate in Philosophy and Literature (Geography and History), to be a professor of History of the Contemporary World and of Spain and of Philosophy at High School with specialization courses that he did not leave until his early retirement in 2000. All this helped him to advise and collaborate by teaching as much as he was asked.

He chaired the Philatelic Society of Granada for 20 years and then elected Honorary President. President of the Federation of Philatelic Societies of Andalusia (FEFIAN) for six years. He participated as responsible of Commissioners of the Spanish Federation acting himself in dozens of world exhibitions, positions in the Committees of Thematic and Youth, FIAF and National Jury, etc.

Few Spanish or Latin American Philatelists do not asked him for advice on starting or correcting their collections, nor do I think there was anyone who did not listen with real attention and enthusiasm to his accurate advice.

He traveled around the world carrying Spanish collections, in his capacity of national Commissioner. He was in most of the world exhibitions to which Spain was invited in the last 30 years. In all the countries he went to, he was known and highly appreciated. To speak of Paco in America, was to speak of an institution of the Spanish Philately, he was the best representative that Spain never had in the entire American continent. He was loved and respected in all the Federations across the Atlantic, where he was continually required to give courses or philately workshops, to give lectures or to organize seminars.

We will always remember him in the many articles he wrote, in the many books in which he participated and in the many philatelic collections in which he collaborated. Dear teacher, dear friend Paco, wherever you are, rest in peace. We will never forget you