Blog - Latest News
You are here: Home1 / Updates2 / Digital and internet possibilities for promotion of Philately: The Estonian... 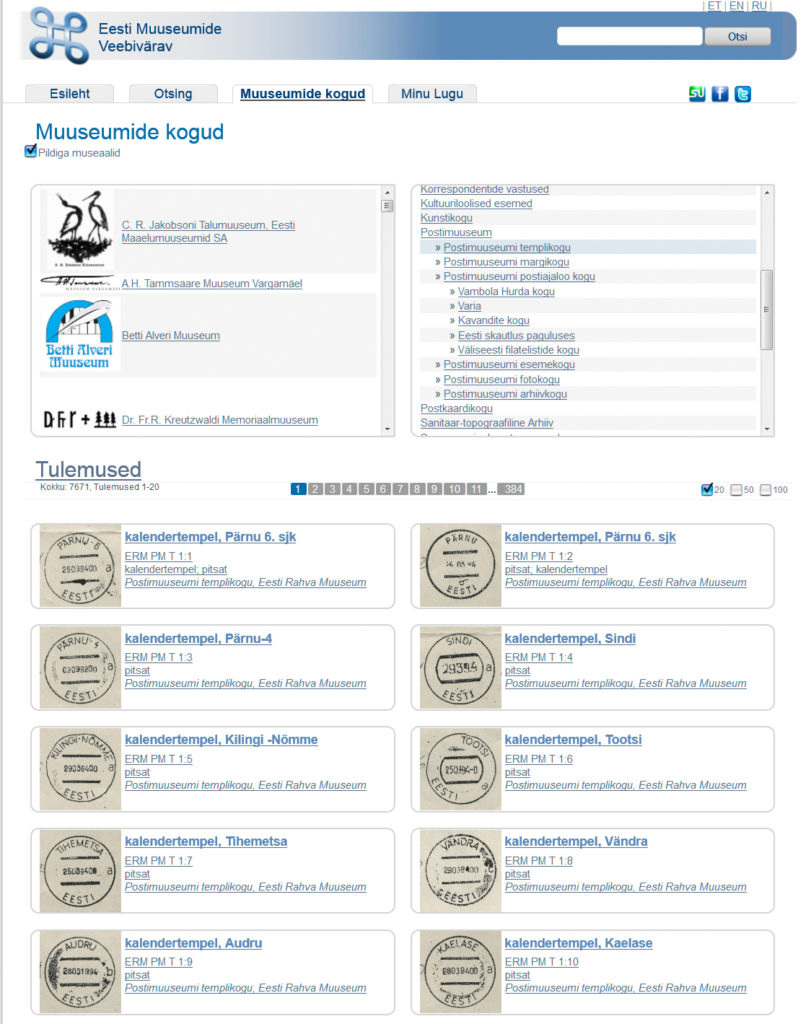 Estonian postal history goes back to the year 1638, when Christina, Queen of Sweden introduced a state postal system in what is now Estonia, while last year marked the centenary of the national postal service. Estonia’s postal history collections are in the stewardship of the Estonian National Museum.

We live at a time when information is increasingly shared online. Museums are naturally also following this path. The museum information system established by the Ministry of Culture in 2008 is one example. The system allows us to administer museum collections while making them available to both specialists in the field and hobbyists.

The information system, accessible at www.muis.ee, provides an overview of postal history collections. To access them, select “Objects” on the top bar or “Muuseumide kogud” if using the Estonian-language version, then “Eesti Rahva Muuseum” in the scrollable list of sites, “Postimuuseum” on the right side, and tick the checkbox reading “Pildiga museaalid” in the top left corner. Entering and digitizing the museum items is a continuing process and so the collections will expand over time.

One way of sharing collections with the public is virtual exhibitions, a process we started in 2017. Now the Estonian National Museum website features the following virtual exhibitions: “Trace of Time” (“Aja jälg” Part 1, Part 2 and Part 3), “The Estonian Postage Stamp Centenary” Part 1 and Part 2, and “Echo of the Song Festival” (“Laulupeo kaja”).

“Trace of Time” takes the visitor back to the years of the War of Independence (November 1918 – February 1920). The museum’s postal history collection has close to 700 postcards sent during the years of the war, bearing field postmarks used in different military units. The first part deals with the creation of the national units in 1917-1918 and field post in 1918-1919. The second part introduces the postal history of the healthcare system during the War of Independence, and the third part examines the postmarks used in the military units. 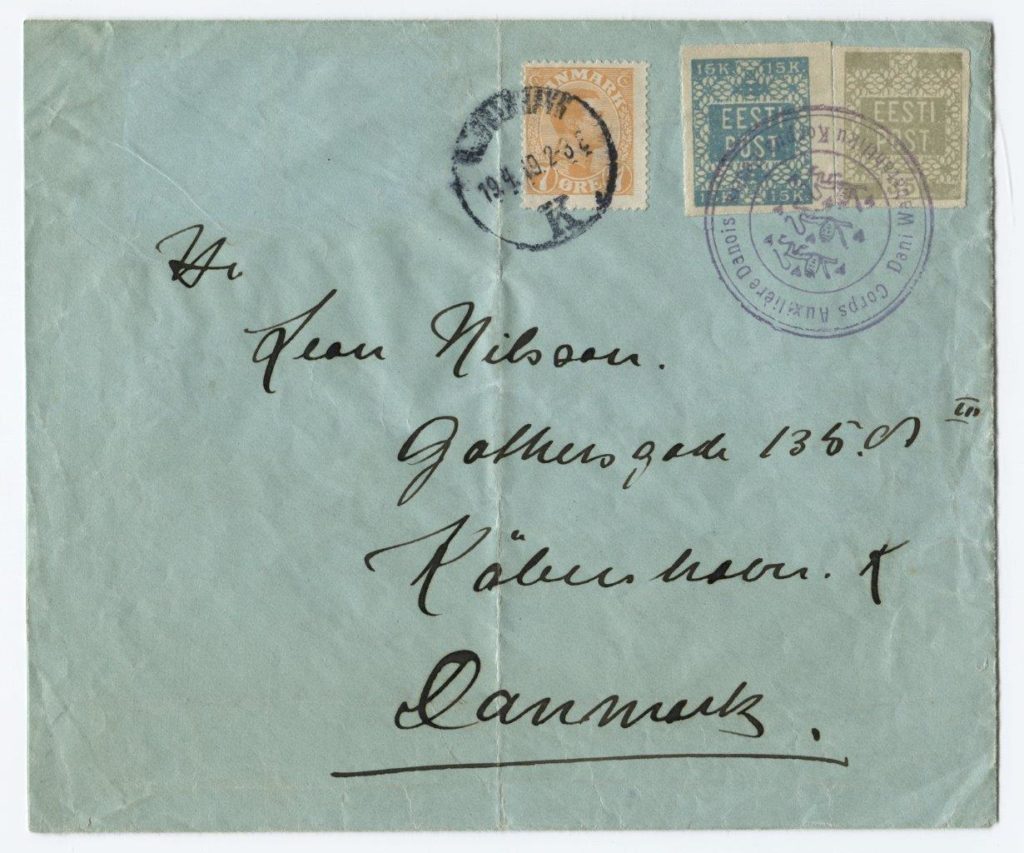 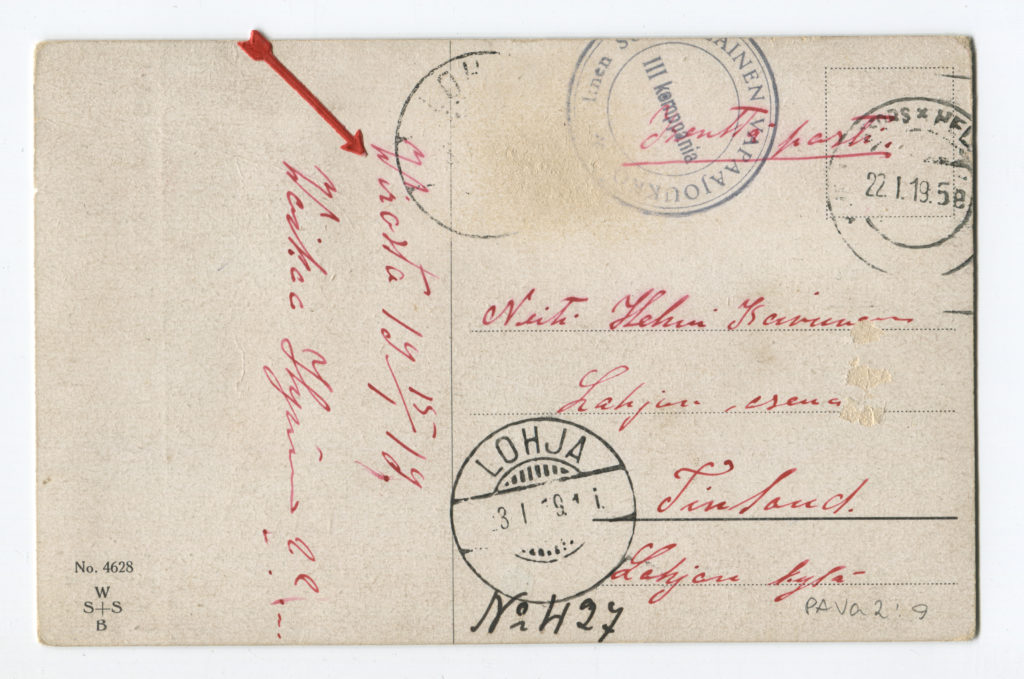 The first Finnish volunteer unit arrived in Tallinn on 30 December 1918 aboard the icebreaker Tarmo under the command of Major Martin Ekström. The 1st Company had 140 men, who reached the front on 5 January 1919. One-third of the Estonian army was ethnically Finnish in January 1919 (3,700 men). 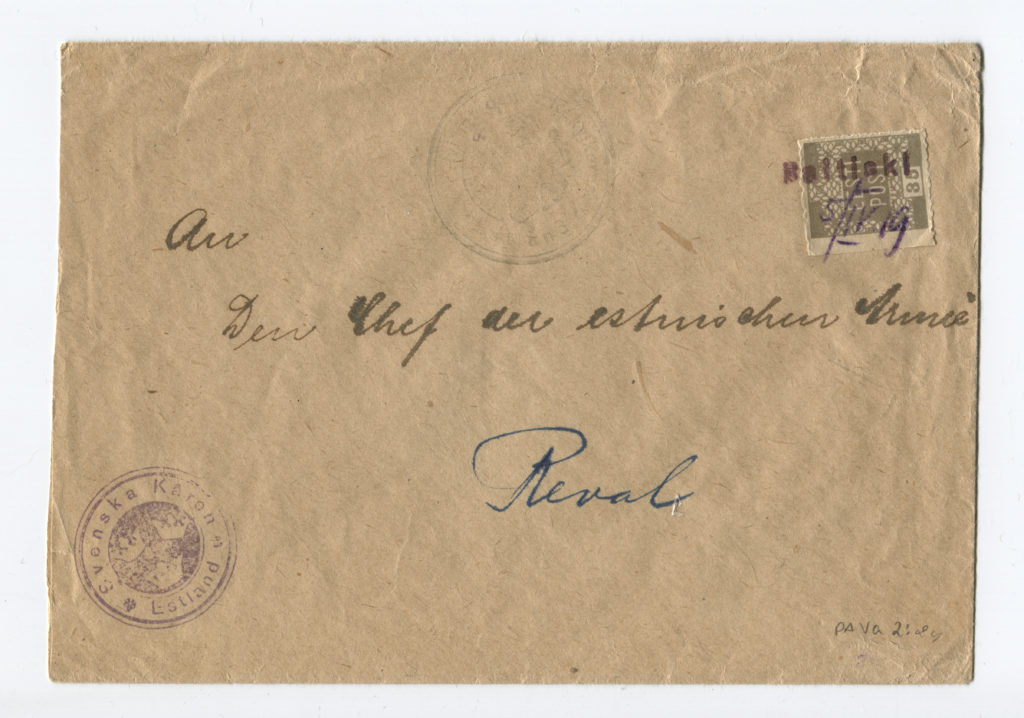 On 13 February 1919, a company of Swedish volunteers arrived in Estonia, led by Carl A. Mothander.  By 13 April of that year, the company consisted of 173 men. On 12 March the company was sent to Paldiski for reorganization and from there on to the Viru front. In the first days of April, the company was assigned to the southern front at the disposition of the commander of the Scouts Battalion. 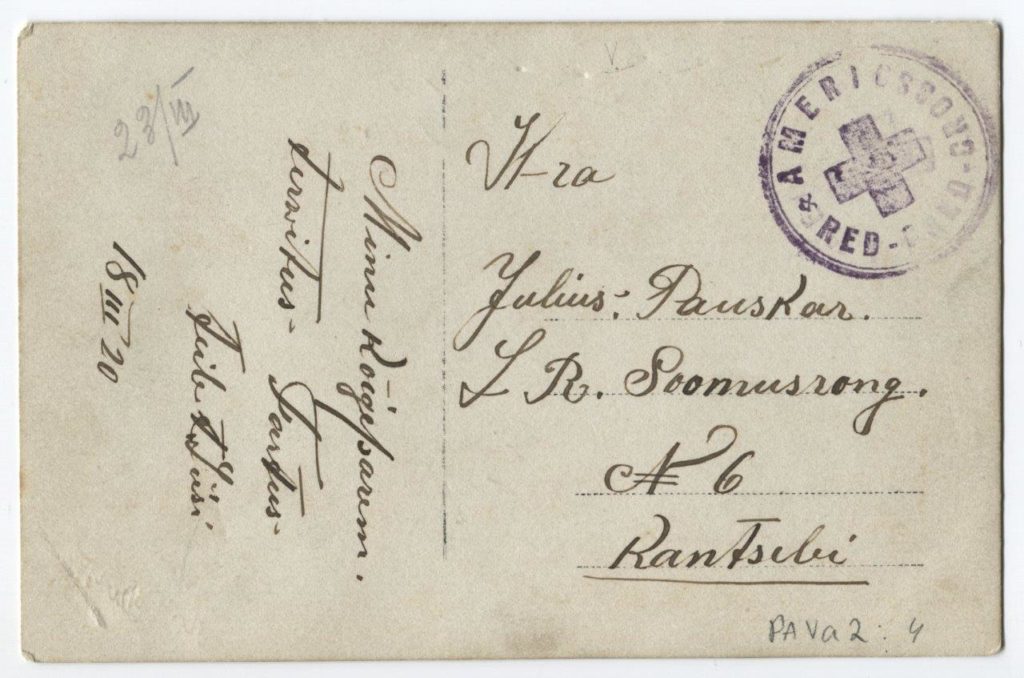 The American Red Cross headquarters was located on Vana-Posti Street in Tallinn. This organization was in charge of transport of injured in the war and ran a hospitals behind the front lines. The Estonian Red Cross opened hospital with support from the American counterpart and purchased medical trains. Assistance was also given by the Danish and Swedish Red Cross.

The “Estonian Postage Stamp Centenary” is a virtual exhibition that chronicles the most significant moments in Estonian postal history. The first stamp of the Republic of Estonia was issued on 24 November 1918, and the first part of the exhibition is devoted to this issue. The second part focuses on another set of stamps known as the Rakvere issue. The virtual exhibition is also viewable in English. The exhibitions are supplemented regularly. 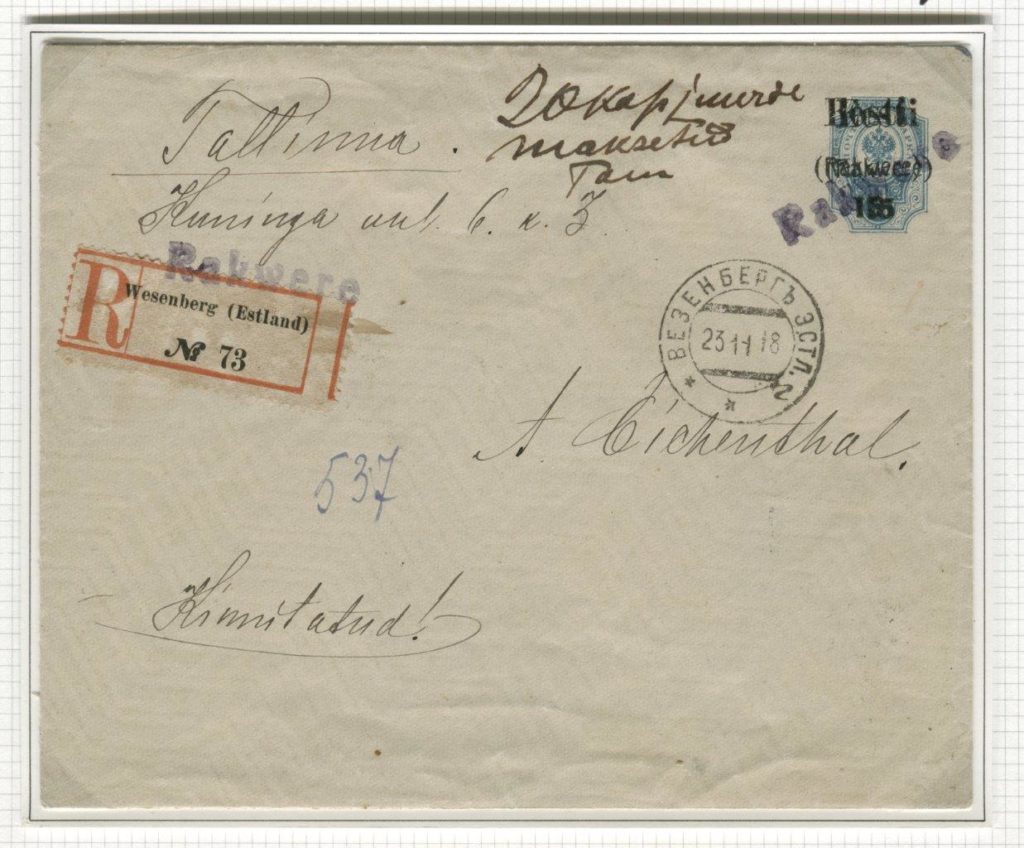 Registered letter (R-letter) from 23 November 1918. Local overprint of a piece of Russian postal stationery (Rakwere) and 15/20 kop. The surcharge for registered post – 20 kopecks – is handwritten. Letter sent to A. Eichenthal.

The “Echo of the Song Festival” is dedicated to Estonia’s major event held every five years and in particular, the 150th anniversary festival to be held this year. At the previous festival in 2014, 33,000 singers participated, 25,000 simultaneously standing on stage under the arch at the Song Festival Grounds. This summer’s 150th anniversary instalment of the event will take place from 4-7 July in Tallinn.

The virtual exhibitions are being produced in cooperation with the members of Estonia, the International Estonian Philatelic Society.

Besides web-based channels, traditional exhibits have not been neglected. The centenary of Eesti Post, the national postal service, was marked with the National Museum exhibition ”Waiting for the Postman” in the open depository. 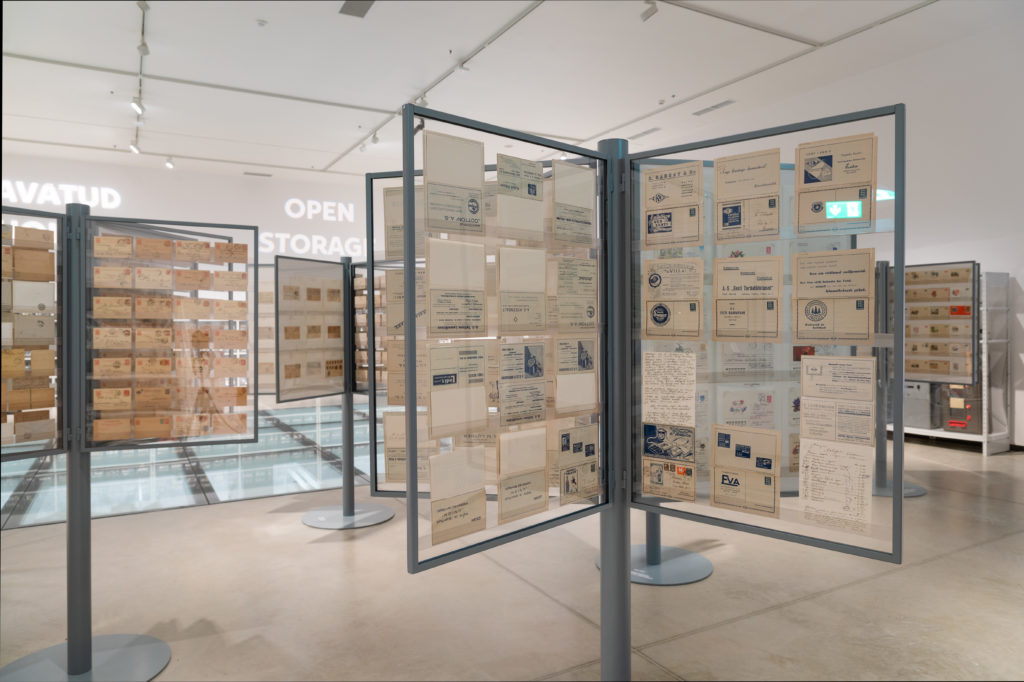 The exhibition of the postal history collections “Waiting for the Postman”. (B. Vosman)

The 64 display stands feature a selection of postal history, including pre-philately and postal stationery from different periods, the full collection of Red Cross card-letters, wartime field post and more. The oldest letter in the National Museum’s postal collection from 156 and two letters of Gustav II Adolf from 1614 and 1615 deserve highlighting. Communication devices are also on display, from telephones to franking machines, over 2,000 postmarks, among other exhibits. The exhibit will run until autumn 2020. All Estonian postage stamps and Estonia-related stamps that were in used during foreign occupations can be found on the touchscreen that will also become accessible on the museum’s website in the near future and which will be supplemented once every months. 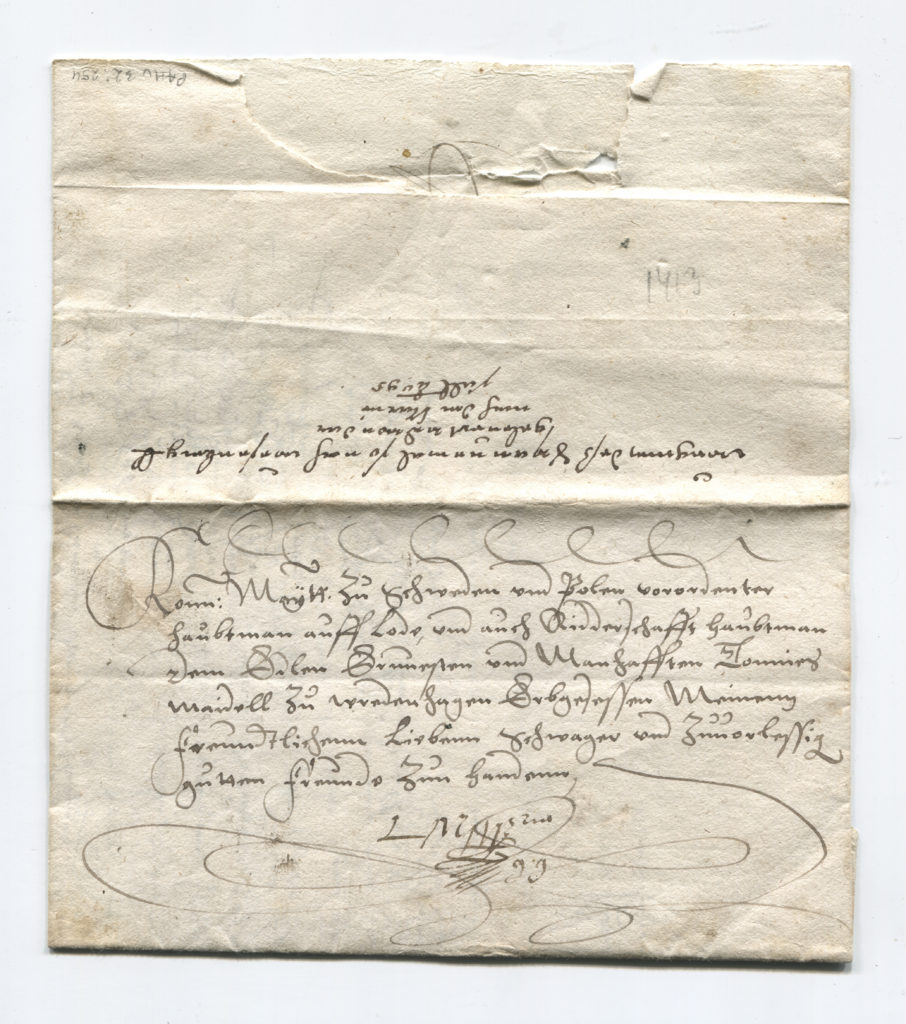 The oldest letter in the National Museum’s postal history collection dates from 1596; it was sent from Rakvere to Tallinn.

The Estonian National Musum library has 4,800 volumes on postal history and philately and the collection is growing each year. The records can be found in the electronic catalogue ESTER https://www.ester.ee/search~S53

See you on the National Museum website and the museum itself, which won the prestigious Kenneth Hudson Award last year for daring achievement and challenging common perceptions of museums.

China 2019: Not only big but a great exhibition
Scroll to top