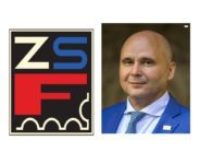 At the 2nd Session of the ZSF held on September 28, 2019 in Trenčín, new representatives were elected to the bodies of the Union of Philatelists of Slovakia – the ZSF Council and the ZSF Auditing Commission.

The current President, p. Miroslav Ňaršík, by acclamation, became the honorary chairman of ZSF in recognition of the work done for the union during three terms of office as chairman.

More informations is published at the  website of the Union of Philatelists of Slovakia – ZSF: www.slovenskafilatelia.sk

Congratulations and best wishes for success!