Blog - Latest News
You are here: Home1 / News2 / Federations of South East Europe meet in Sofia with FIP Board

MEETING OF FIP BOARD WITH MEMBER – FEDERATIONS OF SOUTH EAST EUROPE

There is a practice of F.I.P. Board to hold its meetings in different regions and to meet with local representatives of member federations. It was proposed to the Union of the Bulgarian Philatelists to organize such a meeting on the occasion of the 80th anniversary of Bulgaria’s membership in F.I.P. Our guests were the F.I.P. Board Members: Mr. Tay Peng Hian, RDP, President, Mr. Bernard Beston, Vice-President, Mr. Bernard Jimenez, Vice-President, Mr. Prakob Chirakiti, Director, Mr. Yigal Nathaniel, Director and Mr. Aldo Samamé y Samamé, Director. 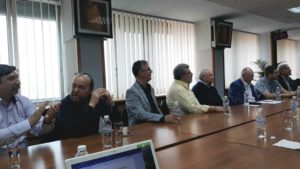 Bulgaria is an active member of the Balkanphila Group, which unites the Balkan federations. The first exhibition of the group was held in 1965 in Varna, Bulgaria. Currently, the group consists of 11 federations, 9 of which are FEPA members. All Balkan federations were invited to the meeting as well as federations from Eastern Europe. Finally, Presidents and representatives of Bulgaria – Mr. Spas Panchev, Romania – Mr. Serban Draguseanu and Mr. Ferenz Ambrus, Croatia – Mr. Nenad Rogina, Serbia – Mr. Alexandar Boricic, Russia – Mr. Sergey Eftushenko, Montenegro – Capt. Tomo Katuric, and Turkey – Mr. Edip Agaogullari met in Sofia. On April 15th, the Presidents and representatives of the federations introduced the activities of their federations and presented to the F.I.P. Board the challenges they were facing. The main issues raised by them include:

On April 16th F.I.P. Board realized their Board meeting and in the evening the Board members also had a Royal Audience of the President of Honor of the Union of Bulgarian Philatelists H.M. King Simeon II of Bulgaria. 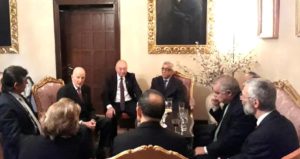 H.M. King Simeon II of Bulgaria, second from left, shares his passion for philately with Mr Spas Panchev and FIP Board members.

On April 17th The President of the Union of Bulgarian Philatelists Mr. Spas Panchev organized meetings – talks of F.I.P. Board members with the Deputy Ministers of the Ministry of Transport, Information  Technologies and Communications and the Ministry of Culture of the Republic of Bulgaria, where the future development of philately in Bulgaria was discussed. It was recommended that schools to return the philately workshops. Minister of Culture awarded the F.I.P. President Mr. Tay with the Sign of Honor “The Thracian Mask of King Teres”. 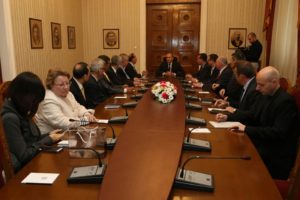