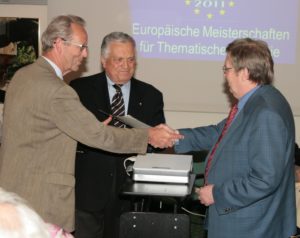 Photo: Herbert Kroog (right) – head of the Exhibition section of BDPh – receives the Certificate of Appreciation, on behalf of the Philatelisten-Club Berlin-Mitte – at the Palmares for the European Championship for Thematic Philately ECTP 2011 in Essen.