FEPA Certificate of Appreciation for the year 2010 was awarded to the local philatelic club in Jihlava (Iglau in German) at the 27th FEPA Congress in Opatija, Croatia. It is a great honour not only for the philatelic club but for the Union of Czech Philatelists (SČF), too. 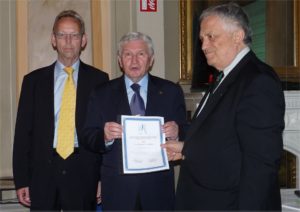 Lumir Brendl former president of the Czech Philatelists receives the Diploma on behalf of the Jihlava Philatelic Club, at the FEPA Congress in Opatija.

Jihlava is a medieval silver-mining town in the Czech-Moravian highlands. It was the centre of social and cultural life of Czech, German and Jewish citizens for many years – till the end of World War II in 1945.

The local philatelic club Nr. 06-40 was founded in 1965 and was – and still is – very active in organizing philatelic exhibitions, competitions for young philatelists (called Youth Philatelic Olympiades), annual stamp collectors meetings from the whole of the Czech Republic, and in publishing regular Jihlava Philatelist bulletin.

One of the most important events was the 2nd Czech-German Stamp Exhibition OSTROPA 2003 held in cooperation with the local and regional governments, the Union of Czech Philatelists, the Czech-German Fund for the Furure, the Ministry of Foreign Affairs of the Czech Republic and the Czech Post. The Exhibition was a good occasion for meetings and talks of BDPh, VÖPh, and Czech and Slovak philatelic delegations. Planting the Tree of Czech-German Philatelic Friendship in the town park was the highlight of OSTROPA 2003. The event was one of many steps towards the Czech-German Treaty of Mutual Philatelic Cooperation signed in October 2008 in Weiden/Oberpfalz.