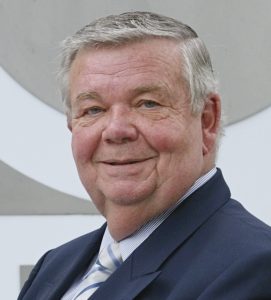 DIETER HARTIG, President of the Federation of German Philatelists (BDPh).

During his decennial presidency he has led an intense cooperation with the neighbor countries as well as with other European and non European Federations, hosted two outstanding European exhibitions, IBRA 2009 and IPHLA 2012, and supported the European Championship of Thematic Philately in Essen since its creation in 2006.