Last month the exhibition Gouda 2019 took place in Sports Centre De Mammoet in the Dutch ‘city of cheese’. It was with over 760 frames and over 20 literature exhibits the largest Nation Exhibition in the Netherlands since 2008. However the frames were the same as 11 years ago, the organiser, Stichting Filatelistische Evenementen, realised a number of innovations. Some of them were new in the Netherlands (and improved) and some were even not seen before elsewhere at exhibitions.

Let us take a closer look at the innovations.

Certainly not unique was a real medal for all exhibitors. This was not seen for decades at Regional or National exhibitions in the Netherlands.

Together with the medal the exhibitors got a certificate, which also the logo of the main sponsor on it.

Most innovative were the frame cards and the catalogue listing. 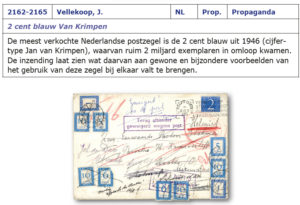 All exhibitors where invited to send a piece out of the collection to the organiser. This was used with the catalogue listing (1), which contained all possible information needed to get good idea about the collection showed. Of course the organiser was dependent on what the exhibitor presented, but by this it became a lively and well to read catalogue with all possible information. Together with 13 articles, it was not less than 224 pages in total. 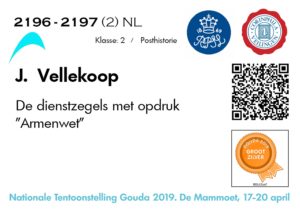 Normally all frames in the Netherlands have a magnetic number on the frame and not more. In Gouda for the first time ever those numbers were not used at all. They had their own model of frame card (2) – also magnetic –  mounted on the frame, but only on the first one. These frame cards had all possible information needed and where complete in order that the public got all necessary information, even without looking in the catalogue. What was very special, and you can still see it by scanning, was the QR-code. When scanning it with a QR-reader on your smart phone, you will see the plan of the exhibit. Of course, the award sticker was glued on the certificate at the end of the exhibition. There was a special and large section of members of the Royal Philatelic Society London. Those frame cards got the Royals logo.

However this should be at every exhibition, the lightning, temperature, width of the lanes and routing was excellent. However spread over three exhibition halls, it was easy to find what was where.