We have been informed by his son Anders that Gunnar Dahlvig has died after a long fight against pancreatic cancer.

Gunnar was a specialist in thematic philately and was a prolific exhibitor and juror. He served in many roles and was Vice-President of the FIP Thematic Commission between 1992 and 2000. In 2000 he signed the Roll of Distinguished Philatelists and in 2013 he was awarded the FEPA Medal.

Giancarlo Morolli, who worked with him for many years, said:

Since we met at Praga 78 he was a real friend and an invaluable delegate and then a very supportive vice president of the FIP thematic Commission as well as a fine juror and lecturer. His contribution to the creation and the international development of the Open Class, as well as many other services to the world of national (e.g. President of the Swedish Federation) and international philately, resulted in his signature of the Roll of Distinguished Philatelists in 2000. Furthermore, he was granted the FEPA medal 2013 for outstanding services to organized philately.’ 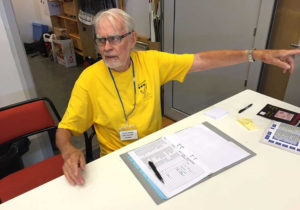 Estonia 2020 welcomes exhibits from all over the world