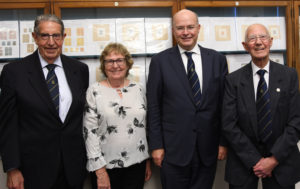 Introducing the displays, President Patrick Maselis RDP FRPSL commented that Latin America is a part of the world not often featured in displays given to the Society. Sadly Glen Stafford could not be present, but Ray Todd had come over from Australia, accompanied by his wife Elsa.

Giving the vote of thanks, Brian Trotter RDP FRPSL reiterated that Latin America is an area not seen often in the UK, yet on show was ‘beautiful, fascinating material’, with items to appeal to all – stamps, including essays and proofs; postal stationery, again with essays and proofs; and postal history. Brian added that all three displaying had been inspired by the late Brian Moorhouse, who devoted so much of his life to promoting the philately of the area.

Those wishing to visit The Royal Philatelic Society London at 41 Devonshire Place, London W1G 6JY, or be a guest at one of its meetings, are asked to contact the Administrative Office (020 7486 1044).