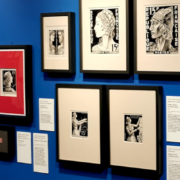 “Marrianne, les visages de la République” is an exhibition at the Musée de la Poste, scheduled to remain open until September 2023. Marianne is a female figure which dates back into the years of the French Revolution, appears continuously on regular French stamps since 1944, changes its appearance only after a presidential mandate, and is expected to be modified once more in 2023.

The exhibition invites visitors to discover and find out all the proposed figures of Marianne during the past years, whether they have or haven’t been approved.

Iceland: NORDIA 2023 to be held in Garðabær
Scroll to top