Blog - Latest News
You are here: Home1 / News2 / Lumir Brendl has passed away. 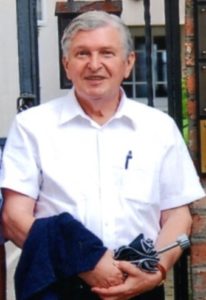 With great regret we announce the death of Lumir Brendl on 8th October 2020.

We received the following obituary notice from Vit Vanicek.

It is with deep regret that we have to announce the death of Mr Lumir Brendl on 8th October 2020 at the age of 85.

Lumir was born on 8th March 1935 in the teacher´s family and stamp collecting he loved from his childhood. Later he developed his interest in the field of the thematic philately. Everybody of us know his famous exhibit „Troubled Times in Bohemia and Czechoslovakia“ which has been awarded with many FIP gold medals.

He dedicated his life to Czechoslovak and world philately. This untiring organizer and juryman was the very successful functionary of the Czech Republic especially as the President of the Union of Czech Philatelists in the years 1995 – 2011.

On a nationwide level he devoted himself to promoting of Czechoslovak stamps and contributed significantly to co-organizing of successful International philatelic exhibitions BRNO 2000 and BRNO 2005 and World exhibitions PRAGA 1998 and 2008.

He mastered many world languages. This was one of the reasons for his long-standing engagement within the Federation of European Philatelic Associations (FEPA) and also as Director of the Board of International Federation of Philately (FIP) since 2000 till 2008.

As FIP juryman he participated at many FIP exhibitions in all over the world, in the France, GB, Spain, Italy, Germany, Poland, Cyprus, Rumania, Israel, USA, Australia, India, Thailand or Russia.

During this period he initiated a number of new rules connected with organizing philatelist competitions and exhibitions. Highly important was his contribution to the evaluation of exhibits in the one-frame class, open class, maxima-phily and post cards philatelic.

Mr Lumir Brendl will be long remembered as one who devoted his life to philately.

Rest him in peace.

José Ramón Moreno added that Lumir was a spectacular person, always kind and ready to help. And of course a great philatelist. He has so many pleasant memories of him.

FEPA thanks Lumir for his service over many years.