Blog - Latest News
You are here: Home1 / Updates2 / Minutes of the 2019 annual FEPA Board Meeting

Minutes of the annual FEPA Board Meeting

Pedro Vaz Pereira welcomed all attendees on behalf of Portuguese Federation of Philately and wished a successful work.

Jose Ramon Moreno welcomed all the present Board members to the last meeting as FEPA President. He pointed out the great collaboration of the members doing a fantastic work and in a friendly and pleasant atmosphere all the time.

1.1 – Sometimes problems occurred because there are more good candidates for FEPA medal but under regulations medal can receive only one in each category. Mr Morolli will prepare a proposition on how to improve this with some changes of the awards guidelines. The idea is that proposal for one person may be prolonged to next two years.

After a report from Giancarlo Morolli and a brief discussion, because all received candidates were of high quality, the following decisions have been taken:

Certificates as finalists were awarded to (in alphabetical order of the countries):

The FEPA Certificate of Appreciation for outstanding activities for the promotion of philately 2018 is awarded to (in alphabetical order of the countries):

– National Club of Collectors of the Registration Labels and Stamps, Poland

– The Philatelic Society of Ljubljana, Slovenia

All books are were donated to the Library of the Portuguese Philatelic Federation.

The FEPA board found out that some bigger federations (unions or associations) didn’t presented candidacies to awarding their clubs and societies.

2 – Review of the FEPA Golden Pin presented to Presidents of our members Federations, Associations or Unions and those to be presented along 2019.

All 16 Presidents of National Philatelic Federations, Unions or Association present at the FEPA Congress 2018 in Prague received their FEPA Golden Pin there. Others are receiving it in different FEPA events of their choice.

The historical Archive of FEPA will be keeping in premises of Royal Philatelic Society London.

3 – Provisional information about the 2018 FEPA Finances.

Treasurer Mr Kunz reported that present situation in FEPA finances is still improving and we hope that such situation will continue. For the FEPA Congress should be prepared report with reasons why the situation is so positive now. Fortunately some members of the FEPA board are making “donations” to the FEPA – not asking for refund of the cost of philatelic trips representing FEPA. The question is what will be with such system in the future.

Alfred Kunz received the congratulations and gratitude of the Board for the accuracy to which he keeps the FEPA accounts.

Ari Muhonen reported that everything is settled in everything goes smoothly. Statistics shows that web site has more and more visitors. In 2018 editor Jose Ramon Moreno posted 108 news on it.

Jose Ramon Moreno explained procedure how FEPA News Magazine spring up. After the FEPA Congress in November 2019 FEPA News Magazine will get new editor so all of us most thinking about this changes, because we wish the same efficiency for the magazine also in future.

Bojan Bračič offer his help in printing and distribution of the magazine also in future although he will not be member of the FEPA board any more. Bojan Bračič was warmly thanked.

FEPA Regulation for Picture Postcard exhibits have been adopted by FIP as experimental class for the time being. For this reasons we will wait with comments before suggested changes of the regulations. Mrs Birthe King is dealing with the O.C. of LONDON 2020 in order to have a new Seminar there of the Picture Postcard.

7 – Implementation of the FEPA SREV for Literature into the FIP.

Longer time as 10 years should be the limit for multi-volumes works.

Birthe King suggested that organizer of the exhibit should offer also one frame for display different data and details about exhibit in literature class.

The FEPA Congress 2018 approved changes in the FEPA Regulations of Modern Philately. The Board has to include these changes in the Website and to inform the FEPA members with the Documents to be sent for the 2019 Congress.

Seminars for Youth philately as it was in Tampere – thinking where and when. Again Mrs Birthe King is very kindly dealing with the O.C. of LONDON 2020 in order to have a new Youth Seminar there.

FEPA President will send a letter to all FEPA members to prepare report of best practise in their countries and present it during the London 2020.

Seminar about printing techniques at printing Picture Postcards already promised in Prague 2018 can be realised at OSTROPA 2010 in Berlin.

10 – Review of the future FEPA Events with FEPA recognition.

11 – Coordination of the FEPA Flags for the FEPA Exhibitions.

At the next FEPA Congress part of the FEPA Board be change: President and Secretary can’t be candidates having finished their terms. It is also on election one Director. So, we are looking for the candidates for mentioned positions. FEPA members are welcome to send proposals to the FEPA secretary till the 29th of August (three months prior to the next Congress) at the latest.

All FEPA members will be informed of the details for the elections by e-mail, by the FEPA Website and in the printed magazine “FEPA News”.

13 – Next Year Board Meeting

Will be decided after the election of new FEPA Board members

The Portuguese Philatelic Federation sent comments to the Regulation for Picture Postcards Exhibits.

As regulations was adopted from FIP short time ago, we recommended to wait a little with such comments.

Have been received a kind request for FEPA Recognition of an International Exhibition, from a member of another Continental Federation. According to the FEPA FREGEX, FEPA can give recognition, support or patronage only to its members. FEPA President will send mentioned explanation to the federation non FEPA member that asked for the FEPA Recognition. 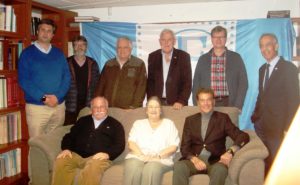 At the end of the meeting, Mr. Pedro Vaz Pereira, President of the Portufuese Federation of Philately and Mr. Rui Alves, member of the PFP Board meet the members of the FEPA Board

The Use of Picture Postcards in Open Philately