The 23rd World Olympic Collectors Fair was conducted in Bratislava, Slovakia from 8 – 10 September 2017 with participants from 29 countries around the world. Branislav Delej, President of the SSOSC and a member of the Executive Board of AICO, was the President of the successful Organizing Committee. 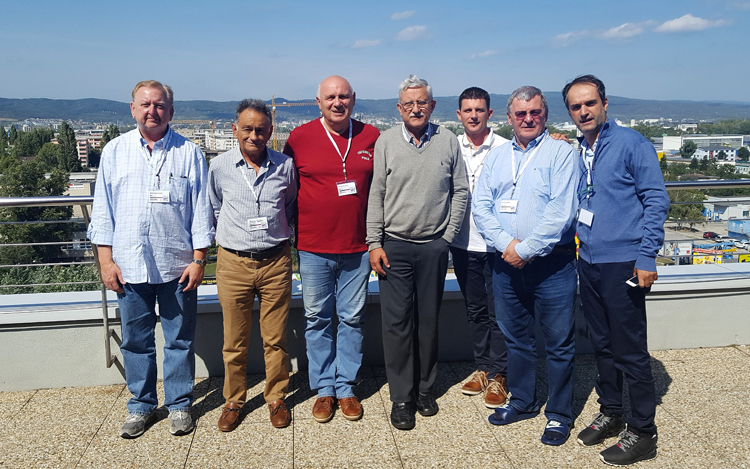 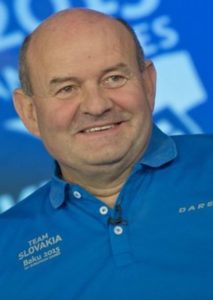 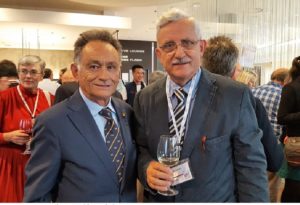 Left photo:  Branislav Delej, President of the SSOSC and a member of the Executive Board of AICO, was the President of Organizing Committee.Right photo: Pablo Galán, member of the –Spanish Olympic Committee and Secretary of the Spanish Olympic Academy, prepresenteing UEFO, Spanish Union of Olympic Philately, and Thomas Lippert, Presidente of the German IMOS- Internationale Motivgruppen Olympiaden Und Sport.

The 23rd World Olympic Collectors Fair was conducted in Bratislava, Slovakia from 8 – 10 September 2017. The Fair was organized by Slovak Society of Olympic and Sports Collectors, with the support of the Slovak Olympic Committee and the Slovak Olympic and Sport Museum following the decision of the International Olympic Committee. Branislav Delej, President of the SSOSC and a member of the Executive Board of AICO, was the President of Organizing Committee. Since China withdrew its bid to organize the 23rd WOCF on very short notice, the Bratislava 2017 committee had only 3 months to organize the fair. Typically, the time period is 3 years or more. Despite this, the committee succeeded in attracting 135 registered participants from 29 countries around the world (USA, China, Japan, India, Brazil, Hungary, Serbia, Croatia, Czech Republic, Poland, Russia, Lithuania, Latvia, Germany, Norway, Spain, Austria, Finland, Italy, Canada, Monaco, France, Greece, Switzerland, Romania, Netherlands, Turkey, Macedonia and Slovakia). In addition, there were about 200 visitors from Slovakia and the Czech Republic for whom entrance was free. The day prior to the official opening of the fair, early registration was held in the late afternoon at which over 75% of participants were registered. During the registration, there was a Slovak wine tasting which was enthusiastically enjoyed by all participants. The remaining participants were registered the next day. On Friday, 8 September – the first day of the fair which was held at the NH Gate One Hotel in Bratislava – the Slovak post office (Pofis) was at the participants’ disposal. One could purchase special postage stamps and postcards bearing the fair logo, and obtain a special unique postmark created especially for the Olympic Fair. At the entrance table, participants and visitors could also buy a special pin, made only for this occasion, with the logo of the Fair.

The Opening Ceremony took place in the afternoon of the first day. In attendance at this ceremony were the President of the Slovak Olympic Committee, Mr. Anton Siekel; General Director of Sport at the Ministry of Education, Science, Research and Sport, Mrs. Bozena Gerhatova; the representative from the International Olympic Committee, Mrs. Patricia Reymond; the Director of the Slovak Olympic and Sport Museum, Mrs. Zdenka Letenayova; and President of AICO, Roman Babut. During the Opening Ceremony the President of the Organizing Committee bestowed upon the ceremony guests, the full set of three commemorative pins with a personalized plaque. Following the Opening Ceremony there was an opportunity to obtain autographs of Slovak Olympic Medalists: Miloš Mečíř, gold and bronze medalist in tennis (singles gold, doubles bronze) in Seoul 1988. Next was Juraj Minčík, bronze medalist from Sydney 2000 in canoeing slalom; Zuzana Rehák-Štefečeková, two-time silver medalist in shooting (trap) in Peking (Beijing) 2008 and London 2012; Jozef Gönci, two-time bronze medalist in shooting (rifle) in Atlanta 1996 and Athens 2004; and judoka Jozef Krnáč, the silver medalist from Athens 2004. Special cards were prepared for each Olympic medalist to autograph and hand to collectors.

In the late afternoon, following the conclusion of the first day of the fair, participants were invited to visit the Bratislava historical museum in the center of the city for a special exhibition “Find your own Hobby” created by the Slovak Olympic and Memorabilia collectors. A special sightseeing tour by train, organized by the fair committee, took participants to the Bratislava Castle and historical center of the old town of Bratislava. Day 2 of the fair was devoted to extensive exchanges of collectibles with the avid participation of domestic collectors. At noon, there was another autograph ceremony with silver medalists from the Rio 2016 Olympic Games in the K4 1000m kayak sprint (Erik Vlček, Juraj Tarr, Denis Myšák – Tibor Linka was unable to attend) and their coach Peter Liker. Then, all participants were presented a Certificate of Participation by IOC representative, Patricia Reymond, and 2017 WOCF Organizing Committee President Branislav Delej. That evening, a Silent Auction was conducted which included a dozen artifacts donated to the auction by the Olympic Museum in Lausanne and from domestic collectors. The auction received a great deal of interest mainly from collectors from China. Following the auction, a Gala Dinner was held at which the special guest was the President of the Slovak Olympic Committee.

Sunday, the final day of the fair, saw collectors concluding their business; the fair closed at 2 p.m. in the afternoon. Collectors, it seemed, were pleased with the fair, departing with new artifacts for their collections, and happy memories of making new friends and getting reacquainted with old ones. In addition to the activities of the WOCF, the AICO Executive Board held meetings that included those open to the public as well as, for the first time, meetings of the various Committees of AICO designed to greatly enhance the community of Olympic and sport collectors. I would like to thank all those who participated and attended the fair. I would especially like to thank the Organizing Committee for their perfect organization of the Fair on such short notice. My personal warm thanks go to the representatives of the International Olympic Committee – especially to Stéphanie Coppex – the Slovak Olympic Committee, the Slovak Olympic Marketing Association, the National Sport Center, the Slovak Olympic and Sport Museum, AICO, and the Slovak Post (Pofis) as well as to the NH Gate One Hotel Bratislava. 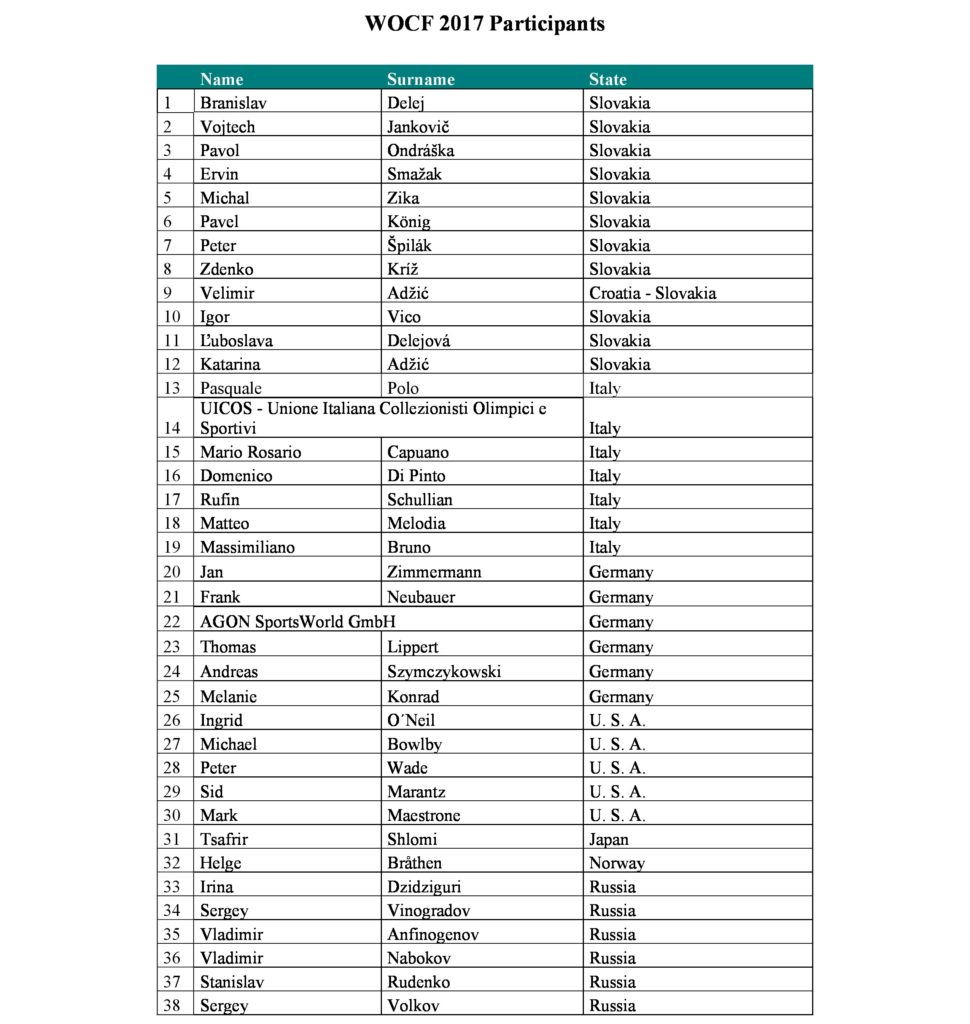 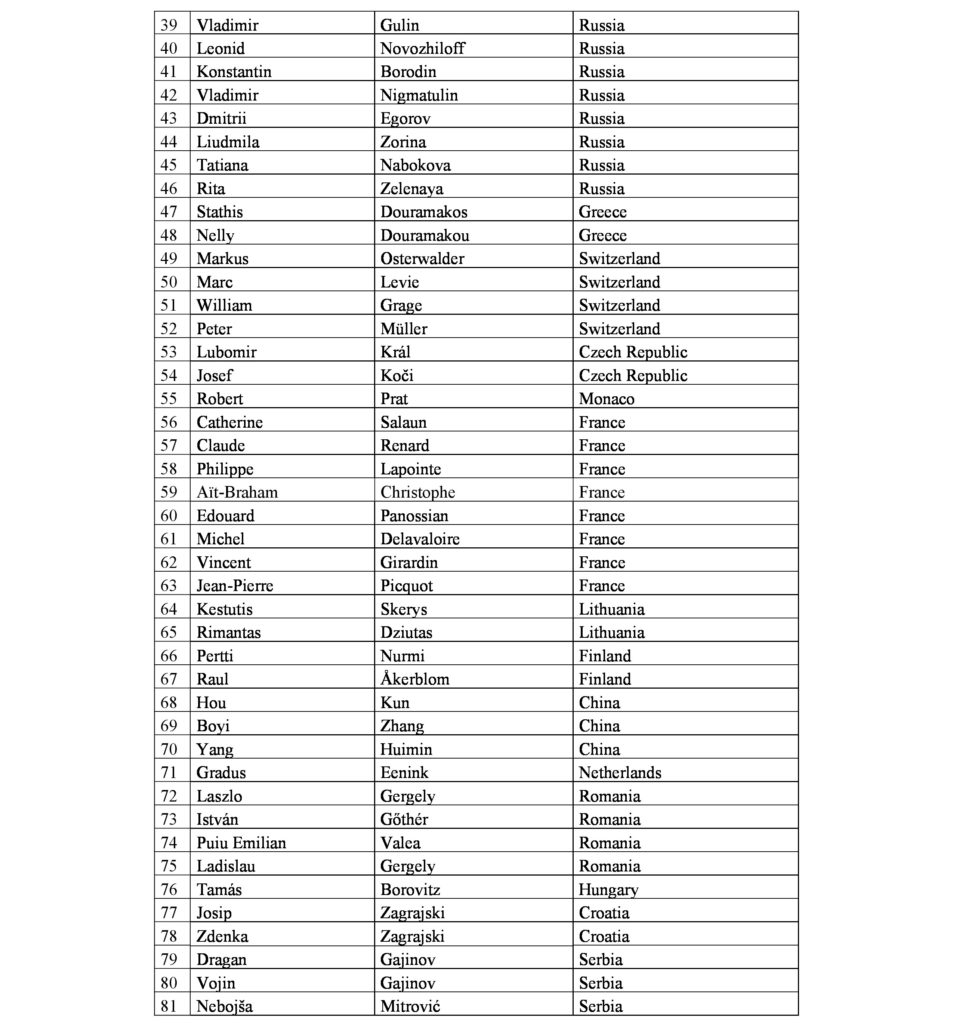 Giancarlo Morolli “Journalist of the Year”

Exceptional overprint on 10.000 souvenir sheets to celebrate the designation...
Scroll to top