Blog - Latest News
You are here: Home1 / News2 / At Milanofil 2016 were presented the FEPA Certificates of Appreciation... 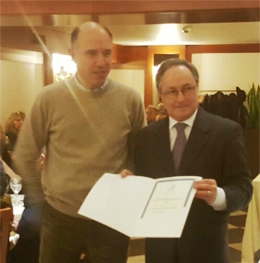 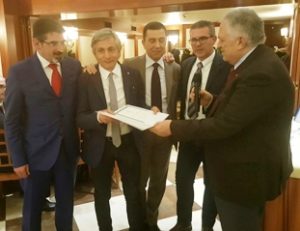 Left, the representatives of the Club Filatelico of Lugano (Switzerland). Right those of the Circolo Filatelico of Bergamo (Italy) receiving the award from the FEPA Vice President Giancarlo Morolli.

The Palmares of a very successful 2016 edition of Milanofil, which had as highlight the presentation of the FEPA Certificate of Appreciation to the Club Filatelico of Lugano (Switzerland), town that hosted our 2014 Congress, and the Circolo Filatelico of Bergamo (Italy). FEPA Vice President Giancarlo Morolli introduced the significance of the FEPA awards and gave the certificates to the representatives of both societies: Adriano Bergamini and Gianfanco Bellini; Mario Bonacina, Vinicio Sesso, Marco Panza and Giovanni Nembrini (Bergamo) They were congratulated by Piero Macrelli, FSFI President, Pietro La Bruna, responsible for Philately of the Italian Post, Andrea Mulinacci and Fabio Bonacina, respectively presidents of the National Associations of Philatelic Dealers and Journalists. Regrettably Jvo Bader, VSPhV  president, could not join due to a recent surgery, but he sent his best wishes through Giancarlo.

Milanofil 2016 had also French participation and a very relevant particularity: 40 % of the 59 exhibits were new ones!

Congratulations to the awardees and to the Organizers of Milanofil 2016!

Solidarity with Belgium
Scroll to top