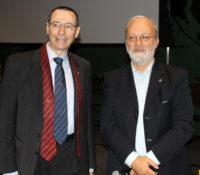 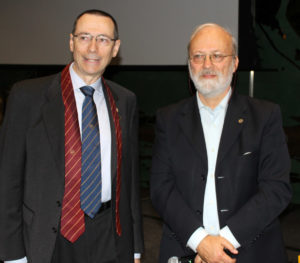 In the photo the two presidents: the new one has the “presidential” red tie donated by the former one

At Monacophil the change of presidency of the Académie Européenne de Philatélie between Bruno Crevato-Selvaggi, Italy, and the new president, Jean Voruz, Switzerland, took place.
Bruno Crevato-Selvaggi who had done a wonderful work for the European Academy during the last four years, said: “with a little regret for the things I have not been able to do, with so much satisfaction for the beautiful things done”.

The new President, Jean Voruz said: “I will try to be a worthy successor after Bruno’s presidency. It is not that easy as he made numerous ideas and initiatives work in favour of our academy. The job he performed will allow me to take over serenely. My intend is to go ahead with the actions undertaken and of course to make our functioning constantly progress.”

Then followed Jean Voruz’s thoughts about the Vision, the Mission and the Values of our AEP:

“Vision:
Adding value to organised philately. Because we have to keep our eyes opened: philately is going down on our continent. We still have less collectors (bad news) of which levels are continuously improving (good news).

Mission:
A social mission: to develop networking which proceeds from the vision of the AEP.

Values:
Philatelic excellence: giving a sense to what is called a hobby (which is actually very much more);

International friendship around a common passion: Europe is living strong changes, is put to probation and to severe tests. Our AEP exists to show that people linked by a common passion can overcome peoples’ divisions and experience our differences. Philately can really set an example.”