On the last days of 2016 out of the blue Dutch postal operator PostNL informed their retailers holding a postal counter (as there are no PostNL post offices in the Netherlands anymore) that as of January 1st 2017 all handed in parcels and registered letters, franked with postage stamps were to be striked with an ordinary ballpoint! Monthly Filatelie reported on her website www.filatelie.nu on January  2nd 2017.

This means that used stamps would be of no value at all to the collector! There hasn’t been made any official announcement besides the internal instructions to their retailers. Also the Dutch philatelic federation KNBF had not been informed about this unbelievable decision.

Early November 2016 PostNL had announced that as of January 1st 2017 all handstamp devices were to be removed from the postal counters. This news was already a shock, as collectors of modern postmarks wouldn’t be able to collect anymore!

The only postmarks remaining – besides of commemorative postmarks – are those for FDC’s, the postmark of the Collect Club, the ‘stamp shop’ of PostNL and the so called roller killers in the sorting centers. For normal letter mail the only ‘postmarks’ remaining are those from the sorting machines which in reality are no postmarks but inkjet prints.

After the November announcement to Dutch collectors the suggestion was made by PostNL that they might get postmarks from the sorting centers on the parcels that were delivered at the postal counters. Not nice at all, but anyway a postmark. However at New Year’s Day it turned out to be dramatically because of the ballpoint strike.

Dutch philatelic world is in shock and the February issue of monthly Filatelie is dedicated to this matter with three open letters towards the CEO of PostNL ranging from collectors to dealers organizations.  There has been a very loud protest to Executive Board Members of PostNL and there has been an intensive silent diplomacy towards PostNL. At the end it lasted nearly two months before a solution was reached. On February 23 it was announced that handstamp devices will return at short term to the postal counters as soon as a new postmark has been chosen, produced and distributed. 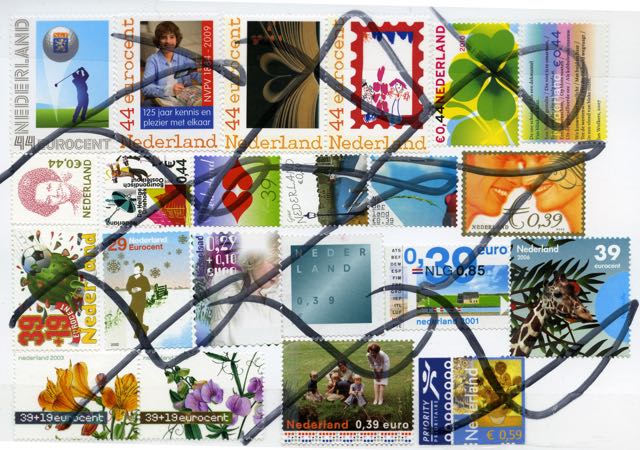