Blog - Latest News
You are here: Home1 / News2 / LONDON 2015 EUROPHILEX Seen for myself – Letter to Frank Walton from...

I was fortunate to be a Commissioner at the LONDON 2015 EUROPHILEX FEPA EXHIBITION, which I will never forget. In spite of the short duration of only four days, it was a great exhibition that all of us enjoyed with many different and interesting shows, duties, and activities. Thank you for the welcome arrangements at the airport and the nice hospitality at the hotel.

The day before the opening ceremony, I joined the volunteers’ team helping all day to mount the exhibits. On the last day I helped to dismount the exhibits. I was impressed by Tony Bosworth’s excellent experience and by the volunteers’ speed in mounting and dismounting the exhibits earlier even faster than expected. Fortunately the “lost” French exhibit, we were looking for, was found and presented very early the following day. The first and second day I enjoyed staffing FEPA’s stand, where I met many philatelic friends and hundreds of visitors. A FEPA research survey was carried out on the third day to find out the preferred way of numbering exhibition pages. The great majority of the exhibitors printed the page number in the bottom right hand corner or on the back. Almost no pages numbers could be seen. The FEPA board will consider what might be the best place.

The innovative aspect of London 2015 Europhilex, the European Championship for Thematic Philately held in Essen, Germany, on 7-9 May 2015, the great Business Design Centre in London, the security measures, the very efficient work in the Bin Room, the many high quality philatelic presentations by the European Philatelic Academy members (AEP) organised by Chris Hitchen and Peter Kelly, the presence of the Association of British Philatelic Societies (ABPS), the many, many interesting philatelic seminars, the excellent and quick work of the Jury, the presence of and co-operation with the RPSL, PTS, AIJP, CSA, the Club of Monte Carlo, the Royal Mail, SPINK, Stanley Gibbons, Christoph Gärtner, Köhler and Corinphila, the over 100 smiling dealers and postal administrations, the 1400 frames of competitive exhibits, and a great number of visitors kept everyone happy up to the last minute. The Palmares reception in the Library at the Guildhall and the RPSL President’s dinner were enjoyed by all of the guests. The show was celebrating the 175th anniversary of the very first issue of the Penny Black but also the 125th anniversary of the Londonexhibition itself.

I would like to express my personal warm congratulations and heartfelt thanks to you for your two years long hard voluntary work and the excellent preparation for LONDON 2015.

For the same reasons, I kindly ask you to convey my personal warm congratulations and heartfelt thanks to the Chairman of the Organising Committee Bill Hedley, to the Jury Chairman Francis Kiddle, to the Treasurer Nigel Gooch, and to all other OC members: Mike Smith, Ben Palmer, Martin Sands, Richard Stock, Peter Cockburn, Tony Bosworth, Richard West, Jon Aitchison, Graham Winters, Gavin Hardy, Brian Trotter, Chris King, Deborah Gooch, Werner Müller and Birthe King. All of you must be proud of the positive results of the excellent and successful exhibition LONDON 2015.

Usually, at all major international exhibitions the President and members of the Organising Committee rightly accept our recognition for the great contribution to the success of the exhibition.

However, I noticed that there was another group of highly skilled and experienced philatelists, who worked hard “behind the scenes”. They were the 90 volunteers, who silently, quickly, and efficiently were necessary in enabling LONDON 2015 to be run successfully. From mounting and dismounting the exhibits, to assisting stand-holders, and giving advice to visitors, it would not be possible to hold such an exhibition without their vital contribution.

Now you know how to organise a successful European exhibition without the financial underwriting of a postal administration.

With my friendly regards 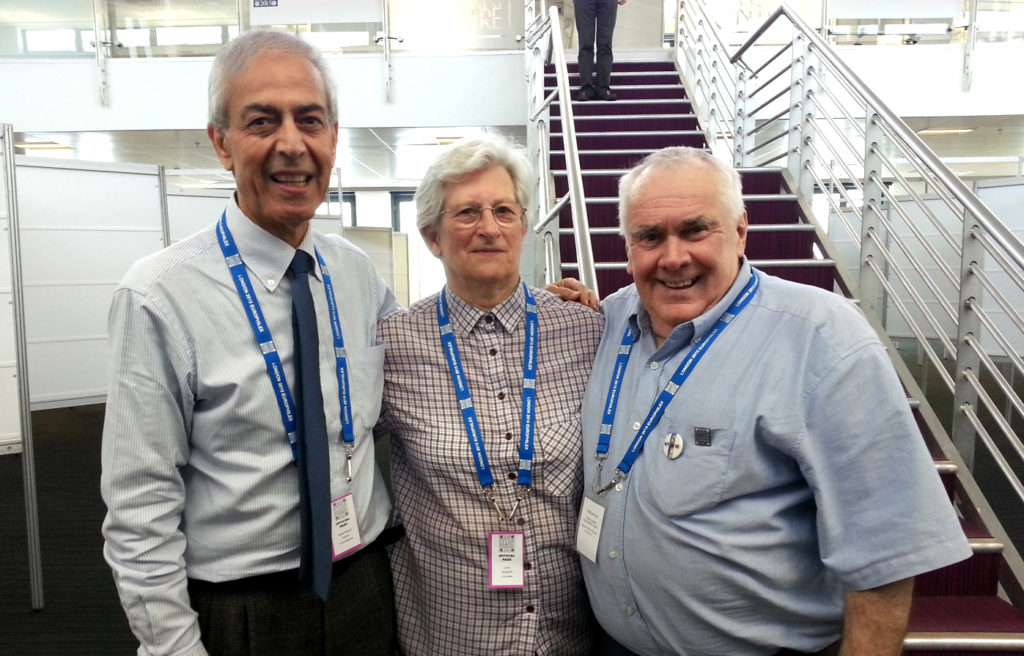 The last people to leave the exhibition hall, smiling that everything was in order, from right to left: Tony and Lindsey Bosworth and Nicos Rangos

Thank you for your thoughtful comments – much appreciated.

I will forward it to the team.

I have seen your very kind letter to Frank about the show.

It was very good of you to name Tony, Peter and Richard, responsible for the mounting, the bin room, and the volunteers respectively.

No show happens without a large number of volunteers to work on the back office activities. There are also those dealing with the accountancy, the organiser’s office, the shop, and generally sweeping up problems, often without much recognition.

In the UK this is the only way that we can put on an exhibition. The only funds from the Post Office are from their stand fees.

I was pleased to see that you have seen how we do it with your own eyes. The only paid staff were those who put up the frames, and the hire of the hall includes the building of the dealer stands and security. We also paid for a small group to hand out material in the entrance, but that was it. We also get help from volunteers from around the world, including yourself!

The awards ceremony (and the RPSL dinner) also paid for themselves without subsidy, although Birthe managed to get sponsorship for the four seminars (£750 per seminar), and Stanley Gibbons paid £2500 to sponsor the opening ceremony. The frames were each sponsored both by a commercial auctioneer and by individual British philatelic societies.

We also had individual patrons who each put £250 into the event. The Americans ask for much more from a patron, but they have a different tradition.

I’m so pleased that you enjoyed the event, and we look forward to seeing you in Athens in the autumn.

Meeting and display of the Académie Européenne de Philatélie (AEP)

New Board of Directors of the Norwegian Philatelic Association. Tore Berg, re-elected...
Scroll to top