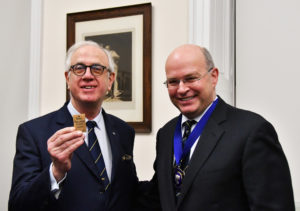 ‘The best I have ever seen. The depth and quality is mind-blowing, and the condition wonderful.’ So commented Murray Gellatly FRPSL, Chairman of the GB Overprints Society, at the display of Morocco Postal History (1852-1925) given by Maurice Hadida FRPSL to the members of The Royal Philatelic Society London on 11 January.

Every post office in Morocco was included in what Peter Kelly FRPSL, giving the vote of thanks, described as a ‘testimony of the research undertaken by Maurice of a difficult and complicated country to study’. Peter further remarked on the tenacity of the runners used by the local posts.

Those wishing to visit The Royal Philatelic Society London at 41 Devonshire Place, London W1G 6JY, or be a guest at one of its meetings, are asked to contact the Administrative Office (020 7486 1044).