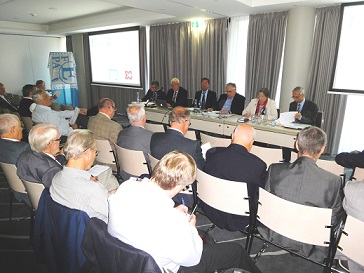 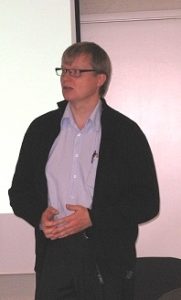 1. Welcome.  FEPA President José Ramón Moreno opened the Congress and welcomed all participants. He asked a minute of silence in memory of  Nikolla Xharo, President of the Albanian Philatelic Federation, who passed away one month ago. The FEPA President then gave the word to Mr. Seydoux, President of the Swiss Philatelic Federation, which hosted the Congress. Mr. Seydoux welcomed all participants and wished them a good and successful work.

The Congress continued following the agenda:

There were 31 delegates present out of 38, an attendance of 81,5 %. Consequently all decisions adopted by the Congress were valid.

Federations, which had not paid their membership fee for 2014, are not shown on the list.

4. Reports from the Board members. As the reports had been sent to the National Federations previously, no presentation was needed. Pedro Vaz Pereira congratulated the Board on a very good website and remarked on the president’s report that the relationship with FIAF should be better than it is now. President José Ramón Moreno explained the situation and promised to work on this matter. Pedro Vaz Pereira also asked all delegates why to pay the membership fee to the FIP, when its board had become a “Tourist agency”. For European philatelic federations (association or unions) it would be quite enough to be members of FEPA.

7. Report of the Auditor. The Auditor report showed that the Treasurer’s work was correct. The FEPA accounts showed exactly the real situation of the FEPA finances. Both documents were approved unanimously by the Delegates, giving thanks to the FEPA Treasurer.

8. Motion from the Portuguese Federation to change the FREGEX in reference to the nomination of Jurors. Pedro Vaz Pereira explained the reasons for the motion, which had been sent to the National Federations previously.

Chris King agreed with the motion in its essence, but stressed the need to trust the organising committees for the exhibitions, the FEPA consultants and the jurors, who all already work according to the spirit of the motion. FEPA has its matters well settled.

Jussi Tuori pointed out that the principle expressed in such motion is already a high priority for the organising committee for FINLANDIA 2017, but a larger number of jurors would create problems for the organisers, so he asked not change the FREGEX. He also informed that a prejudging system would be implemented to make the jury work more effective.

Giancarlo Morolli pointed out that the appointment of jurors is not easy work, as it requires the balance of several factors: experienced and new jurors, country representation, coverage of the main philatelic areas of the exhibits, rotation, and suitable number of team leaders. However the main priority is to create the best team for giving exhibitors the most competent assessment of their work. He considered the spirit of the motion suitable for inclusion in the Guidelines for the FEPA consultant’s work.

Jose Ramon Moreno remarked that there was a general agreement on the spirit of the Portuguese motion, but changes in FREGEX could cause problems for some organising committees or even make the organising of an exhibition impossible.

The Portuguese Federation withdrew the Motion.

9. Motion from the Portuguese Federation to change the procedures for the election of FEPA Honorary Presidents. Peter Suhadolc suggested that such a change would bring a lot of bureaucratic problems on the one hand and the unusual system of two kinds of honorary president on the other. If somebody was elected as honorary president it was because of his/her work for FEPA.

Giancarlo Morolli observed that a lot of presidents exist around the World in the different fields of life and nearly all of them are elected by a majority, not unanimously. Mr Pereira agreed not to vote about motion.

10. Regulations for Electronic Literature. Giancarlo Morolli explained the problem and the fact that the FIP had not made any moves to solve it till now. The German Federation had already prepared the regulations used at IPHLA and tested again and at the recent Multilaterale in Haldenlsleben. The Spanish Federation had also prepared a draft on the subject. The FEPA Vice President shall contact member federations on this subject and propose them a document base on the German and Spanish work, so that it can be agreed and presented to the Commission’s Chairman, Mr Virvilis. All federations would be requested to send their comments within one month of receipt.

11. Presentation of the new Regulations for Aerophilately. Fernando Aranaz, FIP Vice-President responsible for Aerophilately, made a presentation explaining the different problems, which had occurred in the last years when judging Aerophilately exhibits. The Commission for Aerophilately had prepared some changes in the Regulation. The idea would be to bring in two subclasses which would enable the use in exhibits also of stamps for air mail, cancellations and other marks connecting to air mail.

D. Läge, C. King and G. Morolli discussed about the problems which could occur with new subclasses and suggested only a new definition of material suitable for competitive exhibits in Aerophilately Class. Alan Huggins asked that also Postal Stationery be added to this material.

F. Aranaz was asked to send the presentation about proposed changes to all FEPA members.

13.  FEPA News Magazine. José Ramón Moreno reported that fortunately the number of advertisements in the magazine had increased. The FEPA board had decided that the next number of FEPA News would be printed in Slovenia, because of lower prices for printing and lower postal rates.

All FEPA members were asked to send information about best practices and news about their activities. Pedro Vaz Pereira pointed out that FEPA News Magazine is the “blood” of FEPA and congratulated its new editor José Ramón Moreno on his work.

14. Fepanews.com Webmaster Ari Muhoneninvited member federations to contribute to the website. The website needs news for its “life” so news and notices about philatelic activities, changes etc. are welcome. All national federation were asked to put links to the FEPA website on their websites. Information about the FEPA website, fepanews.com, is welcomed also in all philatelic magazines and other philatelic publications.

Chris King observed that people look for information about different activities, hence the need to put all this information on fepanes.com.

The Society for Danish Postal History (Denmark) wasawarded the FEPA Certificate of Appreciation for 2013, and this was received by Søren Chr. Jensen, President of Danish Philatelic Federation on behalf of the Club.

The  Associação de Coleccionismo do Vale do Neiva (Portugal)was awarded the FEPA Certificate of Appreciation for 2013, and this was received by Pedro Vaz Pereira on behalf of the Club.

16. Request for FEPA Patronage and presentation of FINLANDIA 2017.

Jussi Tuori presented the project of FINLANDIA 2017, a European exhibition to be held in Tampere from May 24th to May 28th 2017 to celebrate the 100 anniversary of the Independence of Finland. Picture postcards will be promoted as an experimental class, and prejudging exhibits in e-form will be arranged. The FEPA Congress unanimously granted FEPA patronage to FINLANDIA 2017. FEPA Consultant is Birthe King.

The exhibition will be held in Athens from November 11th till November 16th 2015. The FEPA Congress unanimously granted FEPA patronage to NOTOS 2015. Alfred Kunz was appointed FEPA consultant to NOTOS 2015.

The proposal that the next FEPA Congress be held during the NOTOS 2015 in Athens was also accepted unanimously.

18. Next FEPA Congress. This point was treated under 17.

19. Other matters. There were no further comments.

FEPA President José Ramón Moreno and Secretary Bojan Bračič presented Certificates of Recognition to the representatives of the Federations, present at the Congress, and who had provided outstanding contributions to FEPA by having organised a FEPA event. With Rewards were presented to Ludwik Malendowicz and Eddy Van Vaeck, who had served for two or more terms on the FEPA board, and to the Honorary Presidents Alan Huggins, Pedro Vaz Pereira and Jørgen Jørgensen.

At the end Bojan Bračič presented a personalised stamp with FEPA logo and inscription 25 YEARS, issued by Post of Slovenia and donated by Slovenian Philatelic Association, to all present.