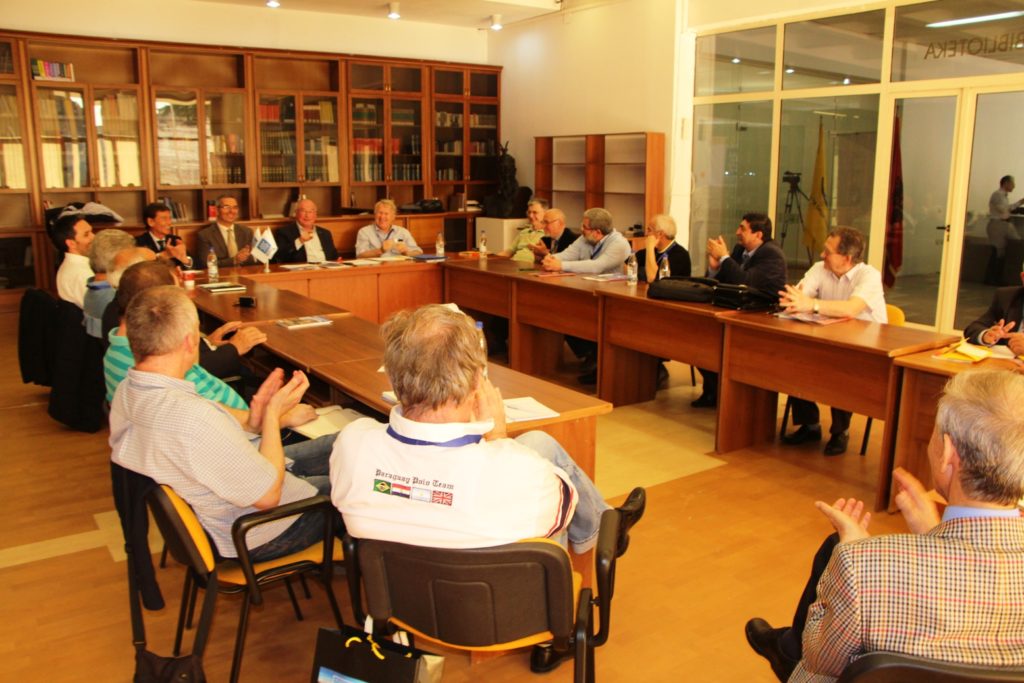 Following the tradition of the Balkanfila group, has been elected as new President the Chairman of the Federation which hosted the last exhibition, now Muharem Gimjani, President of the Albanian Federation. Igor Pirc was reelected as Secretary.

MINUTES OF THE 9th MEETING
OF THE BALKANFILA WORKING GROUP
National Art Gallery Tirana, Library Room, May 6th, 2016, at 17.00
The roll call was made and the following attendance was registered:
Albania: Muharem Gimjani, new BF President,  Edmond Budo, Vasil Xhitoni, Argir Panariti, Julian Demeti,
Bulgaria: Spas Panchev, former BF President, Boncho Bonev, Lazar Lazarov,
Croatia:  Ivan Drašković, Dario Filjar
Greece: Pantelis Leoussis,
Macedonia: Viktor Gaber,
Moldova: Constantin Ciobanu,
Montenegro: Tomo Katurić,
Romania: Francisc Ambrus,
Serbia: Nikola Ljubičić, Jukub Nakri,
Slovenia: Igor Pirc,
Turkey: M. Ziya Ağaoğullari,
BiH: absent
Observers:  Cyprus: Nicos Rangos, FEPA: Jose Ramon Moreno, President
Agenda of the meeting:
1. Confirmation of the Minutes of the 8th Meeting in Vidin 2014
2. Resume of the XVIII. Balkanfila Exhibition in Tirana
3. Organiser of the next – XIX. Balkanfila Exhibition
4. Election of the New Balkanfila President and Secretary
5. Miscellaneous
Ad. 1 Minutes of the 8th meeting in Vidin 2014 have been accepted without comments. President of the Balkanfila Spas Panchev has greeted successful efforts of the organizer of the first international philatelic exhibition in Tirana, who with the support of the Albanian Post did his work excellently. He mentioned also the role of the Balkanfila coordinator of this exhibition Bojan Bračič,  BF secretary Igor Pirc, the BF web-site technical editor Francisc Ambrus and finally the Greek Post, which gave the exhibition frames for the time of the exhibition free of charge. He prised also the task done by the jurors and commissioners, and finally also the exhibitors, preparing and giving their exhibits for the show. He remembers also Mahmut Emirmahmutoğlu, honorary president of the Balkanfila Working Group, whio celebrates in this days his birthday (applause of the auditorium!). Balkanfila exhibitons are not only philatelic events, they are also meeting of friends in the Balkan region. Mr. Panchev suggested also to use other regional events to come together, as f.e. Plovdiv Philatelic Fair, Maximaphila etc. The article of Alexandru Bartoc in the Balkanii şi Europa (Nr. 163, April 2016) Exposiția “Balkanfila” has been mentioned: we should promote our movement in the FEPA News and in the local media. Mr. Jose Ramon Moreno greeted the event in the role of President of the European Philatelic organization FEPA. His opinion was that the regional working groups – Balkanfila is one of the oldest and biggest – are the base for the future development of the philately. President of the Albanian Philatelic Federation Muharem Gimjani expressed the honor and joy to host for the first time the Balkanfila exhibition in his country. They (Albanian Philatelic Federation) did as organizer all possible efforts to make the exhibition on the highest level and for the convenience of the attendants. 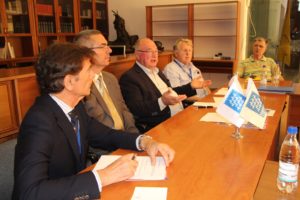 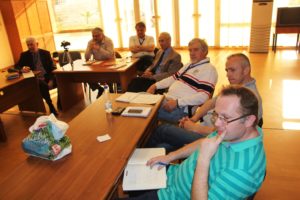 Ad. 2  General and unanimously opinion of the representatives was that the exhibition BALKANFILA 2016, organised by the Albanian Philatelic Federation, was excellently prepared and carried out. The exhibition hall offered enough place and light for the visitors and jurors to admire the exhibits, hotel accommodation was appropriate and close to the exhibition hall. The accompanying program was rich and diversified, showing to foreign and domestic participants the insight into the history and present life of the city of Tirana and Albania as well. Opening ceremony, the presence of 9 TV cameramen and reports on TV stations will popularize the philately and collecting in the country.
Ad. 3 Organizer of the XIX. Balkanfila exhibition: At the moment no definitive proposals have been given. It is obviously that the support of the National Post is the base for it. Some representatives promised to encourage their Post authorities for the organization of the next exhibition. It was agreed that the positive proposal of the national organizer will be discussed and confirmed by e-mail correspondence. The BF coordinator will be appointed too.
Ad. 4  Election of the New Balkanfila President and Secretary : According to the practice, the organizer of the current exhibition, Muharem Gimjani has been unanimously elected the new President of the Balkanfila Working group and Igor Pirc  the Secretary  for the mandate till the next exhibition.
Ad. 5  Miscelaneous:  Balkanfila Working Group Exhibition Regulations have been signed also by the President of the  Moldovan Philatelic Federation Constantin Ciobanu.
Spas Panchev suggested to collect all relevant data and informations on the Balkanfila history to be issued at the 65 Jubilee (2020) as printed edition. Alexandru Bartoc, whose foundation has collected almost all materials, took over this project. Mr. Panchev announced possible exhibiton – 2018 in Sophia (European Sport Capital in 2018).
Mr. Jose Ramon Moreno offered the possibility of joint issues with Posta Espaňa in 2018 (with Slovenia?) and 2019 (with Bulgaria?) – to be comunicated.
Boncho Bonev introduced the candidature of the president of the Bulgarian Philatelic Union Spas Panchev for the FIP director at the congress in Taipei and asked for the support. Igor Pirc added the information of the candidature of the president of the Slovenian philatelic Association  Peter Suhadolc for the presidency of the FIP commission for thematics. Nobody was again, for the region will be stronger through our presence in the FIP structures.
The meeting ended officially at 19.00 with taking the photograph of the attending representatives.
Prepared by

Philatelic Seminars for the general public: an excellent experience

Minutes of the 2016 FEPA Congress
Scroll to top