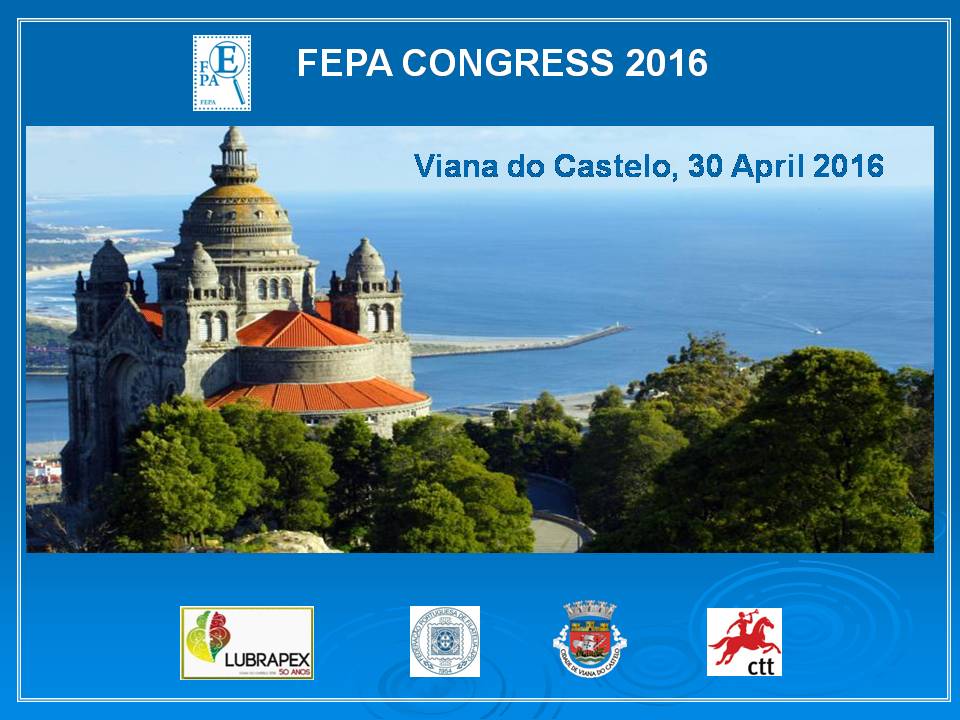 Minutes of the 2016 FEPA Congress, Viana do Castelo, 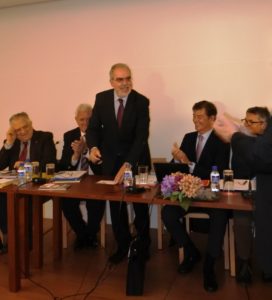 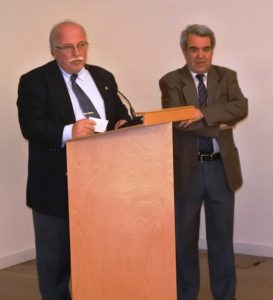 Before starting the Congress work, the Mayor of Viana do Castelo, Dr. José María Costa welcomed all participants, greeted them for their coming to Viana and wished them a successful work and a pleasant stay in Viana do Castelo. Then Dr. Costa and the Philatelic Director of “CTT Correios of Portugal”, Mr. Raul Moreira, stamped the FEPA commemorative Postmark. The FEPA Honorary President, Mr. Vaz Pereira introduced Mr. Luiz Frazao who made present of his fantastic book “Portuguese Pre-Philately” to all the Delegates.
1. Welcome. FEPA President José Ramón Moreno opened the Congress and welcomed all participants, emphasizing the presence of FIP Honorary President Mr Jos Wolff. Then he gave the word to Mr Pedro Vaz Pereira, President of the Portuguese Philatelic Federation, which hosted the Congress. Mr Pereira welcomed all participants and wished them a good and successful work. Mr Moreno expressed thanks to Mr Pereira for his generous and kind hospitality.
The Congress continued following the Agenda:
2. Roll Call and choice of tellers
3. Minutes of the 2014 Congress in Athens
4. Reports of the Board members
5. Financial Statements 2015
6. Budget 2016
7. Report of the Auditor
8. FIP Congress
– Changes in the FIP Statutes
– Changes in the General Regulations of the FIP for Exhibitions (GREX)
– Election of the European representatives at the FIP Board
9. Regulations for Electronic Literature
10. Review of the 2016 FEPA events and those planned for the next years.
11. Request for FEPA Recognition from Members Federations
12. FEPA News Magazine
13. Fepanews.com
14. Motion presented by the Hellenic Philatelic Federation to increase from 6 to 7 members
of the FEPA Board
15. Next FEPA Congress
16. FEPA Awards
17. Any other matters
2. Roll Call. The Secretary Bojan Bračič made the roll call as follows:
There were 38 delegates present out of 43 FEPA members. Three of them had not the right to vote because the membership fee had not been paid. Attendance was 81,4 %. Consequently all decisions adopted by the Congress were valid.
Mr Sherif Samra and Mr Bruno Crevato-Selvaggi were appointed as tellers.

From left: Jan Cees Van Duin, Netherlands; Joao Soeiro, Portugal; Bernard Jimenez, France; Yigal Nathaniel, Israel; Jos Wolff, Luxembourg; Eddy Van Vaeck, Belgium, amongst other Delegates.
3. Minutes of the 2015 Congress in Athens. President José Ramón Moreno asked the delegates for comments or questions on the minutes of the 2015 FEPA Congress in Athens that had been sent to all National Federations. Such minutes were approved unanimously.
4. Reports from Board members. As these reports had been previously sent to the National Federations, no presentation was needed. Delegates had no comments to such documents. Delegates approved the reports with unanimous vote.
5. Financial Statements 2015 and 6. Budget 2016. Mr Alfred Kunz asked if anybody had any comments or questions concerning the reports that had been previously sent to the National Federations. No comments or questions were presented. Mr Moreno stressed the fact that, at the current date, FEPA has sufficient reserve so that no increase of FEPA membership fee will occur in next future. Delegates approved the reports with unanimous vote.
7. Report of the Auditor. Mr Kraner’s Audit report stated that the Treasurer’s work was correct. He gave thanks to Mr Kunz for his exceptional and very transparent work as the FEPA treasurer.
8. FIP Congress
– Changes in the FIP Statutes
– Changes in the General Regulations of the FIP for Exhibitions (GREX)
– Election of the European representatives at the FIP Board
Changes in the FIP Statutes and GREX.
Mr Moreno explained that, as agreed in the last Congress in Athens, the FEPA Board made a Summary of the comments received from the FEPA members on the proposed amendments to FIP Statutes and GREX. Such Summary was sent in advance to all FEPA members.
Mr Morolli presented the most relevant considerations of such Summary:
·         A lot of the proposed changes by the FIP Board are good and useful but some of them interfered with the structure of the FIP Statutes.
·         Continental federations (FEPA, FIAF, FIAP) have no proper position in the FIP Statutes.
·         Electronic communication not mentioned anywhere in the FIP Statutes and the GREX, in spite of their usefulness in simplifying and speeding up organisational processes.
·         Terminology in text is not clear enough in some cases.
·         Bringing the deadline for giving suggestions and proposals from 5 to 6 month before the Congress is a big nonsense in the time of electronic communications.
Mr Moreno asked the delegates to agree on the Summary presented according to the wishes expressed by most FEPA members. On such basis he then would ask the FIP Board to withdraw those proposals.
Nearly all FEPA members do not wanted to change the present texts regarding the Continental federations by introducing a new system of geographical units, which is one of the FIP proposed amendment.
If changes from the continental federations (FEPA, FIAF, FIAP) to the geographical units (Europe, Americas, Asia) were implemented, some federations as Turkey, Israel, Egypt, South Africa would not be represented and could not be candidates to the FIP positions.
Mr Vaz Pereira said that it is not time for nice and pleasant words, it is time for revolution, time to change all FIP documents to be more democratic. Europe lost its power in the last years and nobody knows what kind of future we can expect if this process will continue.
Mr Morolli pointed out that the FEPA Board as such has not any right to comment at the FIP Congress on proposed amendments. Hence the whole discussion was just to converge into a unified European point of view, towards the FIP Congress.
Chris King appreciated the effort of the FEPA Board towards such common objective.
Bernard Jimenez explained that some proposals for changes the FIP Statutes had been already withdrawn: Open Philately would stay as a specific class, Aero and Astro Philately would remain as separate classes. He will do his best to explain the FIP Board why the change from continental federations to geographical units must be cancelled as it is message of the FEPA Congress.
Mr Van Duin mentioned that it would have been of great importance if all delegates from Europe had a united voice about the mentioned matter.
Mr. Moreno fully agreed to Mr. Van Duin words. If we reached unanimity within FEPA, we would have much more possibilities that the FIP accepts our suggestions for withdrawals of the more controversial proposed changes to the FIP Statutes and GREX.
Mr Virvilis pointed out that a clear opposition to the FIP proposals could motivate the FIP Board to look into the point of view of continental federations concerning the FIP Statutes. Mr Virvilis asked what could happen if FEPA send message to the FIP board that it does not support changes of the FIP Statutes and GREX. What shall do the FIP Board? What shall do the delegates? We don’t know.
Mr Crevato-Selvaggi warned that possible changes will come in force only at the next FIP congress in 2018, so the election of the FIP Board in this year will be according to the present FIP Statutes.
Mr. Vaz Pereira informed that he would vote against the Summary of the proposals that the FEPA Congress wants to be withdrawn for the FIP.
Before proceeding to vote, Mr. Moreno reminded that this resume was not the opinion or the proposal of the FEPA Board, but the comments received from the FEPA member Federations, and that of course they had the right to change opinion afterwards. Mr. Vaz Pereira said that by solidarity he would agree to the suggested Summary.
So it was not necessary to vote as all the Delegates supported the FEPA Board suggested Summary of the comments received from the FEPA members on the proposed amendments to FIP statutes and GREX. This Summary will be send to the FEPA representatives at the FIP Board. 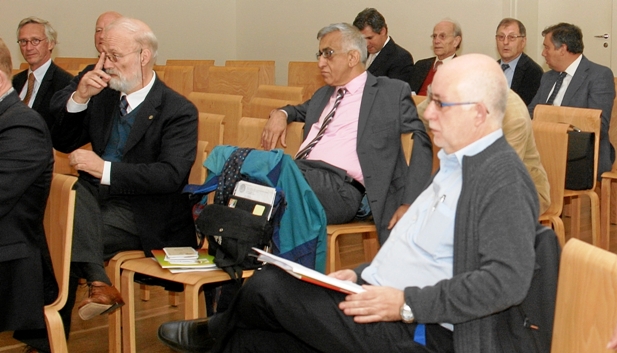 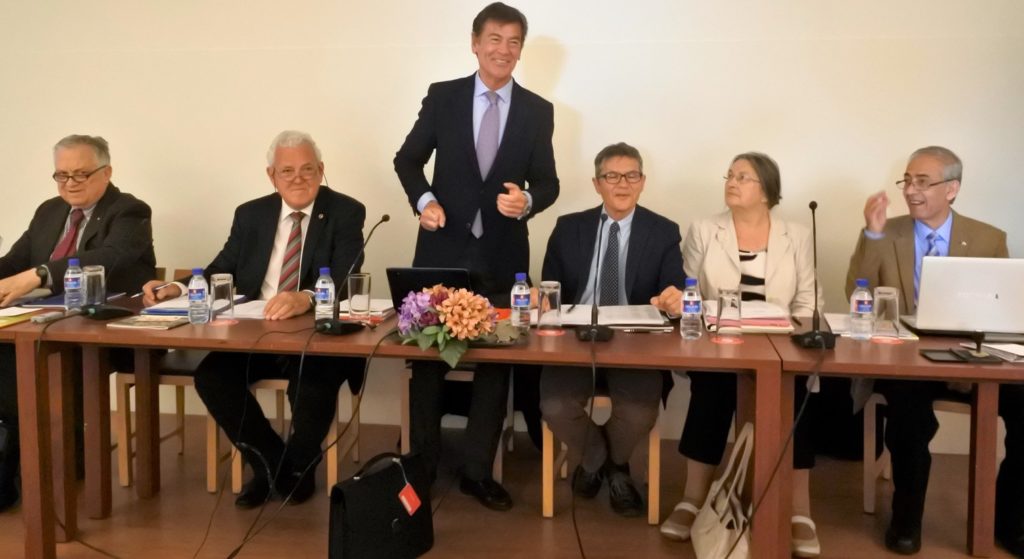 The members of the FEPA Board. From left: Giancarlo Morolli, Alfred Kunz, Jose Ramón Moreno,  Bojan Bračič, Birthe King and Nicos Rangos
Mr Moreno expressed the gratitude of the FEPA Board for the appreciation shown by so many FEPA members that realized the benefits deriving from the FEPA status being granted to their exhibitions.
On the FEPA web site has been published a resume of the conditions for FEPA Patronage, Support and Recognition to make it easier to understand, as Statutes and FREGEX are not such clear. This resume and the whole Presentation to the Congress will be sent to all FEPA members.
11. Request for FEPA Recognition from Members Federations.
·        Mr. Chris King, delegate of the U.K., asked for the FEPA Recognition for STAMPEX 2017, London, U.K., February 15th to 18th.
·        Mr. Jose Antonio Arruego, Delegate of Spain, requested the FEPA Recognition for EXFILNA 2017 in Portugalete-Bilbao, from the 7th to the 12thOctober 2017.
Mr. Vit Vanicek, delegate of the Czech Republic, requested the FEPA Recognition for PRAGUE 2018, from the 15th to the 18th of August 2018.
·        Mr. Spas Panchev asked for the FEPA Recognition of PLOVDIV 2019, Bulgaria, in May 2019.
The FEPA Recognition to these exhibitions was unanimously granted.
12. FEPA News Magazine. Mr Morenopresented the draft of the expected contents of No 29, which will issue in June 2016 and asked for any other interesting information, which could be submitted by national federations. Those who intend to publish articles with no previous reserve of space should communicate their intention urgently, as the issue is nearly completed.
13. Fepanews.com. Mr Muhonenexplained how a problem about domain hostage would be solved and asked for information about all philatelic events from FEPA members.
14. Motion presented by the Hellenic Philatelic Federation to increase from 6 to 7 members of the FEPA Board. Mr Virvilis explained the reasons for motion. The FEPA Board is doing much more works than in the past, including the Website and the high number of FEPA Exhibitions. The motion was accepted with 1 vote against and 1 abstention.
15. Next FEPA Congress. On behalf of the Organizing Committee of Finlandia 2017, Mr. Muhonen invited the delegates to hold the next FEPA Congress in Tampere along to the Finlandia 2017 exhibition. The Congress unanimously accepted the invitation.
16. FEPA Awards. Mr Moreno and Mr Morolli handed out the FEPA Medals and Certificates of Appreciation 2015 to:
-Mrs Maire Kiddle, in memoriam of Mr. Francis Kiddle, U.K. ,FEPA Medal for Exceptional Service to Organised Philately
-Mme Michèle Chauvet, France, FEPA Medal for Exceptional Philatelic Study and Research for “Les tarifs helléniques des lettres internationales 1861-1878 »
-Mr.Calin Marinescu, Romania, as 3rd runner-up for Exceptional Study and Research for his book “Revenue Stamps used In the Romanian Postal Service 1872-1915”.
-Mr. Spas Panchev, President of the Bulgarian Federation received the FEPA Certificate of Appreciation for Outstanding Activities for the Promotion of Philatelygranted to the
Philatelic Society of Sofia „Petko Karaivanoff”, Bulgaria.
-Mr. Eckerhard Fromm, President of the Club, received the FEPA Certificate of Appreciation for Outstanding Activities for the Promotion of Philatelygranted to the Briefmarken-Sammler Verein Gotha 1890 e.V., Gotha, Germany
With no other matters to discuss, the Congress was closed in an atmosphere of harmony and friendship, where the Delegates demonstrated their great interest for the important matters discussed. The Congress was followed a lunch kindly offered by the Portuguese Federation to all Delegates and their partners.
Bojan Bračič
FEPA Secretary
11.6.2016
/wp-content/uploads/2017/09/1-2016-FEPA-CONGRESS_0.jpg 720 960 José Ramón Moreno /wp-content/uploads/2022/03/fepanews_logo-300x138.png José Ramón Moreno2016-06-11 19:10:492017-11-04 08:27:54Minutes of the 2016 FEPA Congress