After the Amphilex 2002 exhibition in Amsterdam two enthusiasticphilatelists – Mihael I. Fock and Igor Pirc –decided to publicise one-frame exhibiting within the Alps Adria region and former Yugoslavia countries. The first one-frame exhibition under the name EnoOkno 2003, EnoOkno meaning OneWindow, was arranged in the Museum of the Gorenjska region in Kranj in October 2003. The reason for choosing the exhibition name was that a one-frame exhibit is a window looking over a story…

The specialised biennial philatelic exhibition with international participation OsmoOkno (»EighthWindow«)  Kranj 2017 was therefore already the eighth meeting of one-frame exhibits from ten countries – Austria, BiH Republika Srpska, Croatia, Germany, Hungary, Italy, Macedonia, Serbia, Slovenia and – for the second time – Israel as a special guest. The event, organised by the Slovenian Philatelic Association under the patronage of the Alps Adria Philately Working Group, with the co-operation of Gorenjskimuzej Kranj and sponsored by the Slovenian Post, took place in the France Prešeren House, part of the Gorenjski museum.

The opening ceremony was attended by the Philatelic Federation representatives from Austria, Croatia, Germany, Hungary, Israel and Slovenia. Mag. Marjana Žibert,director of the Museum, Karmen Hauc, director of the regional branch Ljubljana of the Slovenian Post and Igor Pirc, representing the Slovenian Philatelic Association and the Organising Committee delivered speeches. Singer Petra Čebulj entertained the public with three songs. Unfortunately, due to illness, the co-organiser Mihael  Fock could not attend, so the participants sent him a greetings card of the exhibition (Slovenian Post issued a illustrated postal card OsmoOkno bearing the picture of medieval Kranj by Meridian). In order to allow the attendance of as manyvisitors as possible, the exhibition was open till Saturday, September 17th.

The jury team led by Peter Suhadolc, with Veselko Guštin and Igor Pirc as members, followed the FIP regulations for each class. The quality of the participating exhibits of this exhibition was found to be quite high, resulting in 25 gold, 21 vermeil and 4 silver medals.

The Grand prix of the OsmoOkno 2017was unanimously assigned to the exhibit Die PostbeförderungdurchSchiffeder PSNC zwischen Valparaiso und Callao 1842-1854, of the Bavarian Exhibitor Jörg Maier.

During the Palmares the idea of opening the exhibition also to exhibitors from other countries was put forward. In any case, the Deveto OknoKranj 2019 – the ninth biennial one frame exhibition in September 2019 – will be glad to have you there! 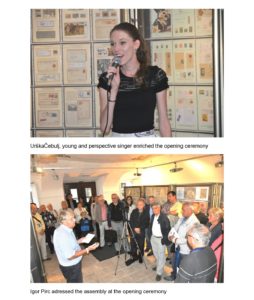 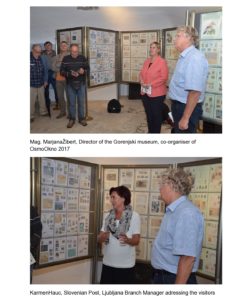 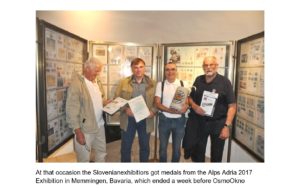 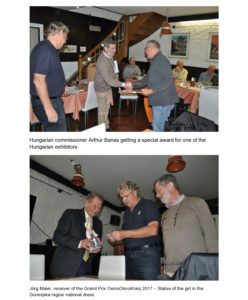 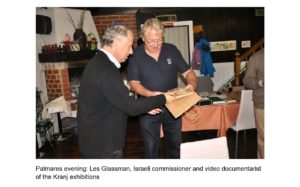 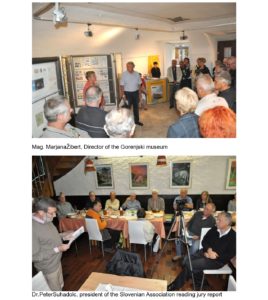