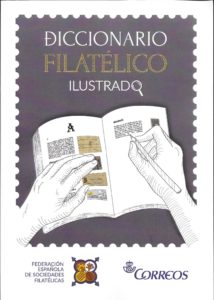 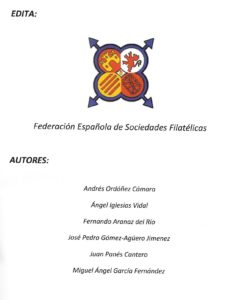 We are very pleased presenting the Illustrated Philatelic Dictionary, received just beggining the New Year 2018. It is an outstanding work, the biggest and better of this kind ever done in Spanish language and may be even in any other language. It is the result of five years of great efforts of the six authors: Messrs.  Aranaz, Garcia Fernandez, Gómez-Aguero, Iglesias, Ordonez and Panés with many collaborators from Europe and America.  It consists of 428 A4 pages with more than 1860 entries and around 2000 related meanings, with the same number of full colour images. The Editor has been the Spanish Federation – FESOFI, with the support of the Spanish Post “Correos”.

It is a key tool not only for the Spanish speaking Philatelic Community, but also for the thousands philatelists from all around the world who collects some philatelic areas related to the over 20 countries which official language is Spanish. 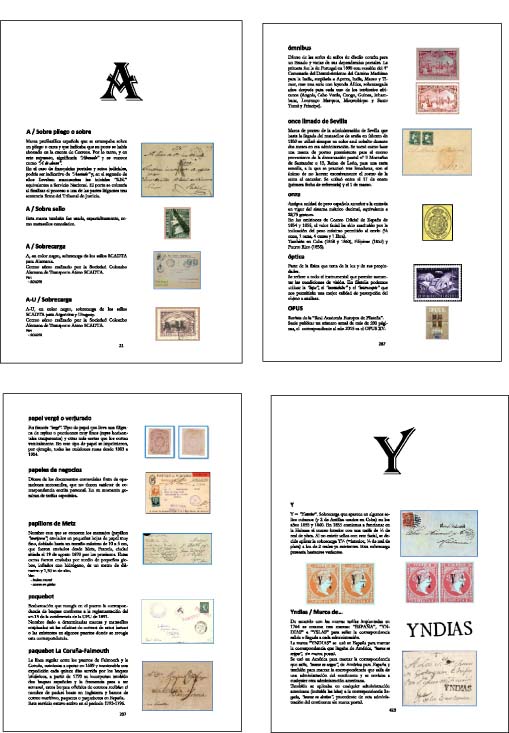 In the Foreword of the book, Mr. Modesto Fraguas, Director of Philately of the Spanish Post “Correos”, says:

“… it is a satisfaction because I have always considered that any discipline that propagates a generic and of course specialized knowledge must have a dictionary that allows to consult words or terms in order to regulate a common vocabulary among all, whether professionals or amateurs who interact in that activity streamlining their understanding. For these reasons, the Spanish philately could not be outside of this project, since it was needed this tool”.

The dictionary is a work of reference. We can consider it as a specialized dictionary since it contains terms that are included within a specific field of study: philately.

Since it is of a general nature, it is almost impossible to include its entire lexicon given its magnitude, but it includes a selection, in our opinion, the most complete possible. In it, all kinds of meanings are included, from the most basic to the most significant, going through the most widespread by use and, therefore, the most known and used.

It consists of 428 pages with more than 1860 entries and around 2000 related meanings all of them, with the world of philatelic collecting, with a convenient, adequate and profusely illustrated text, because “an image is worth a thousand words”. This shows of the intense and complex work carried out by a group of thirty-two people, experts philatelists, who have contributed with their knowledge and experience, gathering the most varied meanings, that over more than a century and a half, have enriched the Spanish dictionary: stamps, marks, postmarks, regulations, federations, companies, societies, exhibitions, magazines, characters, rates, routes, etc.

In short, it is a work that aims; on the one hand, to contribute to the better knowledge and dissemination of philatelic terminology and, on the other, to attract the attention and interest of all those who still do not know it.

To conclude, allow me to express my admiration, thanks and congratulations to those who have made it possible, the authors Andrés Ordóñez Cámara, who was also author of the initial Dictionary of the Youth Commission, Ángel Iglesias Vidal, Fernando Aranaz del Río, José Pedro Gómez-Agüero and Juan Panés Cantero, who has also been in charge of the layout, for his tireless, excellent and invaluable work that they have developed in these years and practically until the last minute.