As Europe prepares to commemorate the centenary of the First World War, British and Belgian Philatelists, and their guests will gather in Ypres in Belgium from Friday 11th July till Monday 14th July for lectures and an exhibition of philatelic material from the War. The Roll of Distinguished Philately will also be signed in Ypres in the Cloth Hall. This year’s signatories are Robert Johnson FRPSL and Christopher King FRPSL, both from the United Kingdom, together with Wolfgang A. Maaßen FRPSL from Germany and Danforth Walker FRPSL from the United States. Signing the Roll of Distinguished Philatelists, founded in 1921 and first signed by King George the Fifth, is the pre-eminent philatelic honour in the world.

The Cloth Hall, the chief symbol of medieval prosperity, was severely damaged by fire caused by incendiary devices on 22nd November 1914, and by the end of the war the belfry tower dating from 1201 was a burned out ruin. Rebuilding began in 1928, and the restoration was finished in 1967. 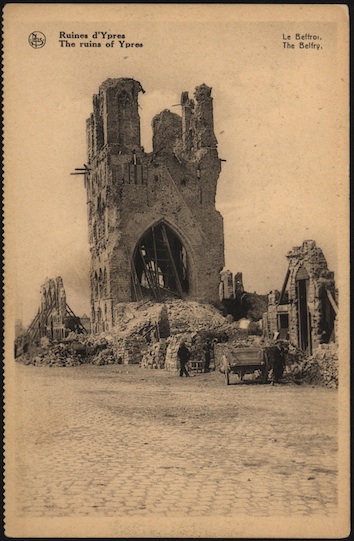 Contemporary postcard showing the bell tower of the Cloth Hall after its destruction during 1914-1918. 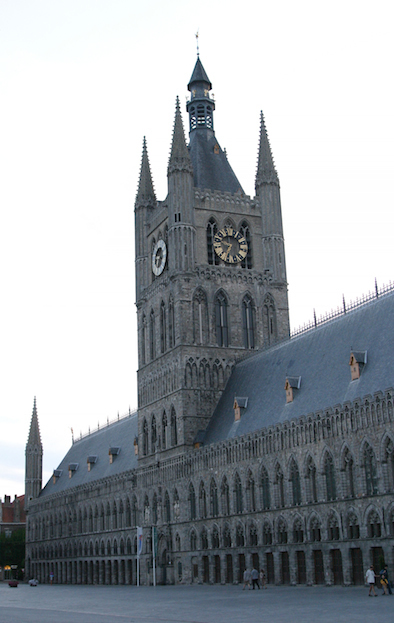 Patrick Maselis is a Vice-President of the Royal Philatelic Society London and President of l’Académie de Philatélie de Belgique, and together with the President of the Royal, Chris King FRPSL, they have invited members of the two societies and all interested philatelists to a philatelic meeting in Ypres, where they will jointly host the 2014 RDP ceremony, talks and displays on WWI philately, a reception at the Cloth Hall, a special ‘Last Post’ at the Menin Gate followed by a gala dinner, a battle field tour, and the closing dinner. For Chris and Patrick philately offers both an opportunity for study and an opportunity for social gatherings, where old friends and new can meet. Visitors are expected from many of the adversaries of 1914, united through an interest in philately.

Both Chris and Patrick had grandfathers in the First World War. Bertie King (1893-1965), briefly an acting corporal, serving on the French-Belgian border, and Jérôme Maselis (1897-1937). Both were soldiers and both returned home from the fighting.

Surviving covers are unique testimonies of one of the darkest chapters in European history. They tell the stories of individual men and women, which are often missing from the history books, and speakers are invited for lectures on WWI related philately. At the same time there will be a 200 frame philatelic exhibition of material from “World War One in Northern Europe” at “Het Vleeshuis”, the Butchers’ Hall, a 13th century building opposite the Cloth Hall.

Below are a few examples of Danish and Belgian material, which will be shown at the exhibition, but with 200 frames on display there will be material from the whole of the north western part of Europe, not just of interest for postal historians, but for all disciplines from traditional to open philately. 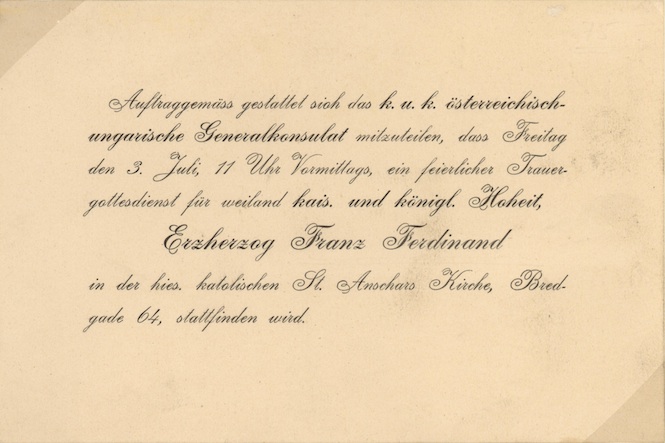 3rd July 1914: Invitation to a memorial service for the “late Imperial and Royal Highness Archduke Franz Ferdinand” in Copenhagen. 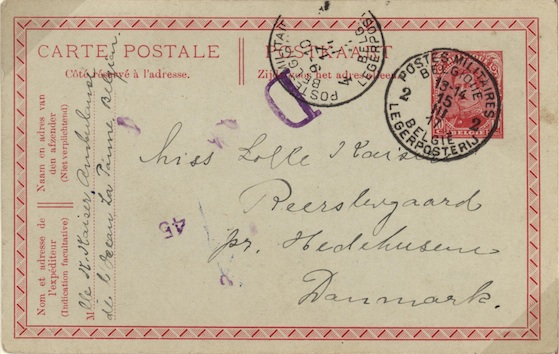 Denmark provided a significant number of volunteer doctors and nurses, who worked in hospitals and ambulance units, mainly behind the lines on the Allied side. The Red Cross Hospital in De Panne, named L’ambulance de l’Océan, was set up in December 1914 and closed on October 15th 1919, remaining open to treat victims of the Spanish ‘flu epidemic. This hospital treated more than 24,000 wounded soldiers and was staffed by nurses from Great Britain, Canada, the United States, and Denmark.

For Patrick Maselis, one of the main attractions will be the opportunity to display a cover from the trenches around Ypres written by his grandfather. Patrick was offered this cover in 2011. He had never before seen any document in his grandfather’s hand writing, because he died in 1937, and his house was burnt to the ground in the early days of the Second World War. 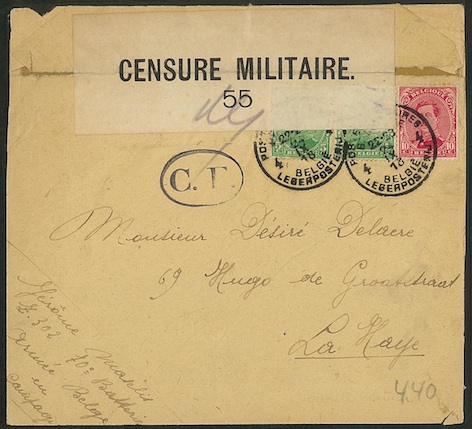 25th September 1918: Envelope sent by Jérôme Maselis to The Hague in The Netherlands

The cover was sent in early 1918 from the trenches to The Netherlands. It was franked at the preferential rate of 20 centimes for The Netherlands. Since it was not addressed to a family member, free franking did not apply. The letter went from Belgium via Folkestone to The Netherlands. The censor in Folkestone opened the letter and put the oval stamp C F (Censored at Folkestone) on the cover. The CF in oval is rare and was in use only at the very end of the war. 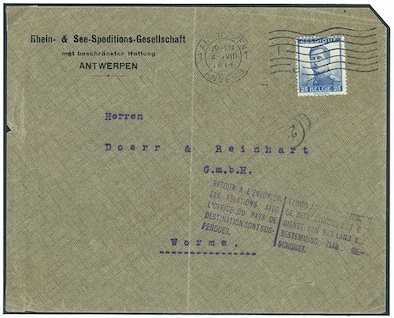 Germany invaded Belgium on 4th August 1914. All mail exchange with Germany immediately ceased. This is a cover from that day addressed from Belgium to Germany, and returned to sender, service suspended. To get mail through the enemy lines many legal and illegal routes were used. A legal route in use in 1914 and early 1915 was through the Dutch consulate in Ghent, since the Netherlands were neutral in the First World War.

The Royal Philatelic Society London and the Belgian Academy of Philately look forward to a weekend of philately with good food, good conversation, interesting philatelic research, and remembrance of the devastation that descended on Europe in a period of less than six weeks between the assassination of 28th June and 4th August 1914 when Britain, reluctantly, declared war on Germany after the invasion of neutral Belgium.

The RDP Ceremony in the Cloth Hall at Ypres will be a time for celebration of our hobby, and of the peace that we enjoy in Europe, in a building that rose again from the ashes of the First World War and from the death and destruction of 1914-1918.

All interested philatelists are welcome. If you would like to visit Ypres and participate, or for all further information, please consult the website www.rdpceremonyweekend.com or contact Patrick Maselis directly at info@maselis.be  or by fax on 00 32 51 22 69 50 or by regular mail: Kaaistraat 19, 8800 Roeselare, Belgium.

New Board for the Finnish Federation
Scroll to top