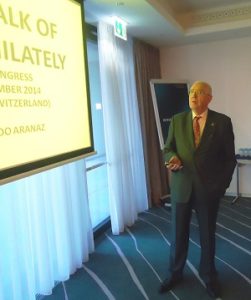 In Mr. Aranaz’s opinion, there are two problems:
a) A severe interpretation and /or application of article 3 of the SREV for Aerophilately.
b) We have more than 30 years doing the same.

In the present Regulations “An Aerophilatelic exhibit is composed essentially of postal documents transmitted by Air bearing evidence of having been flown” Stamps have disappeared!

“An Aerofilatelic exhibit has therefore as basic contents: Postal documents dispatched  by air,  Official and semi-official stamps issued especially for use on Airmail, in mint  or used state, but principally on cover.

WHAT REALLY HAPPENS IN THE PRACTICE?

Some Jurors in a severe application of the SREV of Aerophilately “penalize” in Treatment those exhibits showing stamps, or if they think that there are “many stamps”, it is transferred to Traditional.

TO SOLVE THE PROBLEM. THE PROJECT FOR FUTURE REGULATIONS

It is difficult to understand the Aerophilately without the stamps that made it possible.

The new SREV of AEROPHILATELY:

Article 2: Competitive Exhibits
An Aerophilatelic exhibit is composed essentially of postal documents transmitted by Air bearing evidence of having been flown and also of stamps and proofs and essays relating to the Air Mail and Aerophilately.

Would be two Subclasses of Competitive Exhibits:
Subclass a)  Covers flown
Subclass b)  Air Mail stamps and their use in Air Mail service

Article 3: Principles of Exhibit Composition
Aerophilately represents a study of (the development of) air mail services, stamps related to Airmail, and a collection of documets pertaining to such development

An Aerofilatelic exhibit has therefore as basic contents:
Subclass a) Covers flown
Subclass b) Air Mail Stamps and usage

The whole presentation can be downloaded here.

Fernando Aranaz, in contact with the Commission for Aerophilately is preparing the changes in the Regulations to be approved by the FIP Board.

At the end there was a turn of Questions and Answers. There was a general consensus on the logic of allowing the full use of the Airmail Stamps, but Chris King, Damian Läge and others Delegates of the Congress  were worried about the problem of making more complicated Regulations with new subclasses instead of easier Regulations. They suggested making only a change in the new definition of the material suitable for competitive exhibits in Aerophilately Class. Alan Huggins asked to add also postal stationary to this material.

It was agreed to send the presentation about the proposed changes to all FEPA members.

Handed out at the FEPA Congress of the 2013 FEPA medals and certificates of...
Scroll to top