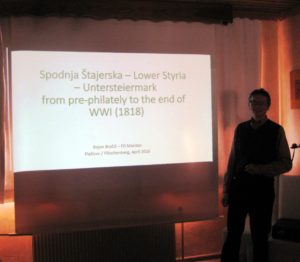 POSTAL HISTORY OF FORMER KRAIN AND LOWER STYRIA FROM PRE-PHILATELY TO THE END OF WWI, DURING SHS 1919-1921 AND DURING OCCUPATIONS OF SLOVENIA IN WWII

The event was held on the Carinthian hill at an inn in the village of Plöschenberg/Plešivec with a beautiful panorama over the romantic countryside on both sides of the river Drau/Drava. About 25 postal history fans from both countries (and a guest from Germany) took part to the three-day meeting held from April 15to 17, 2016.Among the participants there were also the president of the Slovenian Association, Dr. Suhadolc, and a representative of the board of the Austrian Federation, Dr. Lind.
The program consisted in the following presentations:
Gert Geier, Austria: The post in Crown land Krainun til 1918
Bojan Bračič, Slovenia: The post in Lower Styria until 1918
Bojan Kranjc, Slovenia :Late use of Austrian postmarks after the end of WWI in the State/Kingdom of SHS
Dr. Helmut Kobelbauer, Austria: Other late usage of Austrian Monarchy postal items after WWI
Dr. Robert Lipp, Austria: Lower Styria under German Occupation (1941 – 1945)
Dr. Hadmar Fresacher, Austria: Oberkrain(1941 – 1945)
Fritz Sturzeis, Austria: Italian and German Occupation of ProvinzLaibach(1941 – 1945)

All the presentations were enriched with small displays of postal material in frames, as well as with scanned postal items. Dr. Kobelbauer summarized at the end of the symposium the important points raised by each presentation and proposed some topics for the next symposium to be planned in two or three years.

The venue of the symposium – Austrian Carinthia – was quite meaningful for the discussed topics. In its southern part the Slovenian minority is present (The 1920 plebiscite after WWI was the topic of the previous symposium), the village Plöschenberg/Plešivecbears the name in both languages, the mother language of the landlord of the inn is Slovenian, the small nine-men choir from the nearby village enriched the evening with harmonious singing that included one old Slovenian folk song. And we – the lovers of postal history – are all very good friends.

A special thanks for this successful symposium is due to its main organizer, Dr. Hadmar Fresacher.